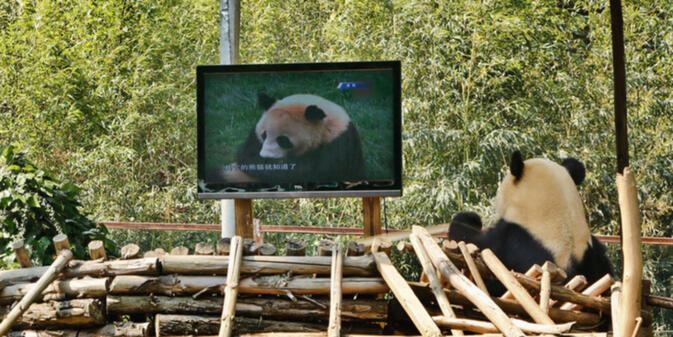 A giant panda currently living in a southwestern China wild animal park has been given a new television. The gift is an effort by increasingly bewildered zookeepers who are attempting to alleviate abnormal behavior characterized by "grumpiness" and "signs of depression" in the eight year-old bear.

The animal in question, a female named Si Jia (思嘉), was moved to the Yunnan Wild Animals Zoo (云南野生动物园), along with two other pandas in 2008. The three individuals were relocated from the national Panda Protection and Research Center in Sichuan after the facility was severely damaged in a horrific 8.0 magnitude earthquake that killed more than 69,000 people.

The pandas lived outside of Kunming and slowly recovered from their ordeal in a large bamboo-shrouded enclosure. They were together for five years until one was sent to the United States in 2013 and another returned to Sichuan earlier this year. Si Jia has now apparently grown despondent while trying to adjust to living alone. In addition to losing her appetite, the panda has begun behaving erratically and abandoned her normal routine.

Handlers attempted to introduce several new toys and play with the bear, but to no avail. Zookeepers next attempted to cheer Si Jia up by installing exercise equipment including a wooden swing and set of parallel bars. The bear did initially use the swing but has recently been reported to be unable to sit upright on it, often falling off and landing in a heap on the ground.

Mirrors were then mounted around the enclosure in hopes Si Jia would mistake her own reflection for another panda. A life-sized panda doll has also been placed inside a covered area where Si Jia often spends time. A wall-mounted television is the latest attempt to cheer up the grumpy panda. Although media reports have somehow failed to include what is being shown on the TV, from photos the programming appears to largely revolve around nature documentaries featuring pandas.

The television was only installed a few days ago, but initial reports claim Si Jia has begun watching programs while eating, occasionally emitting soft grunting noises. It is unclear if zoo officials or Si Jia are aware of several recent US and European psychological studies linking television watching to the increased likelihood of developing depression.

The Yunnan Wild Animals Zoo is no stranger to bizarre stories. In 2006, it premiered what would become an extremely popular 'tiger-fishing' attraction. Visitors were encouraged to buy raw meat and dangle it above hungry tigers from bamboo poles. Four years later, a pack of dogs inexplicably gained access to some zoo enclosures and went on a bloody rampage. Six rare sika deer were killed and an emu was mauled. More recently, the zoo lost track of a raccoon. The story went viral on social media, leading to the establishment of a still-unclaimed 10,000 yuan reward for information leading to the animal's recovery.

In the 80's a lion escaped from the Kunming Zoo. The story is in one of the first Lonely Planets on Yunnan (from the early 90's).

So apparently a lion got out of the Kunming Zoo one summer night. There was a man who went for morning exercise and got bitten by the lion. Later it was chasing people until it was dealt with.

Its a good story and old kunming people still remembers it well.

Edits were made to this article regarding the departure dates from Kunming for the other two pandas.

My wife and I went there about 2 weeks ago and there was only this one lonely panda pictured here. We paid 20 kuai just to get close to it and take pictures. The panda is just lonely. It needs a couple of more friends to play with. I went to the zoo just to see a panda up close. They are so irresistible.

The TV and exercise equipment have apparently had their desired affect. The panda is no longer depressed:
www.china.org.cn/photos/2014-04/28/content_32227045_3.htm