By GoKunming Staff in Features on February 18, 2014 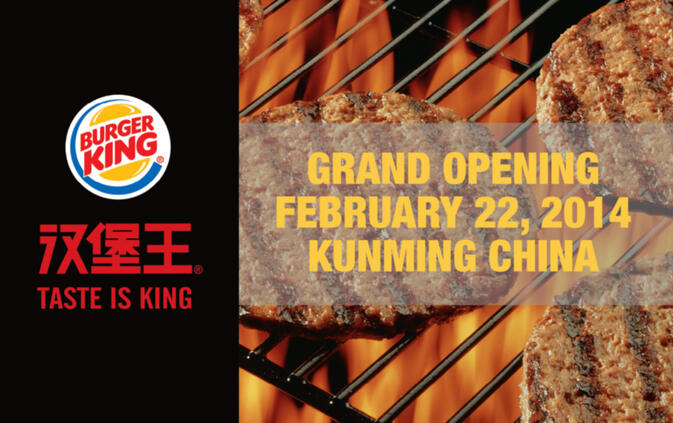 The opening of first Burger King in Kunming has been much on the mind of many a GoKunming user for more than a month. We contacted the people responsible for bringing the fast food chain to the Spring City and got the lowdown on exactly when, where and how the first outlet will open.

We found out that the franchise will be throwing a party on February 22, in downtown Kunming and has plans to break ground three more restaurants in town. The opening ceremony for the first of these franchises will be held in the square outside the new Burger King Golden Eagle Mall location and is planned to last roughly 90 minutes.

Beginning at 10am the store will hold its grand opening. After a brief ceremony, members of the Burger King management group will give speeches. Immediately following the addresses, there will be a live musical performance until roughly 11am, when a Whopper-eating contest will be held. 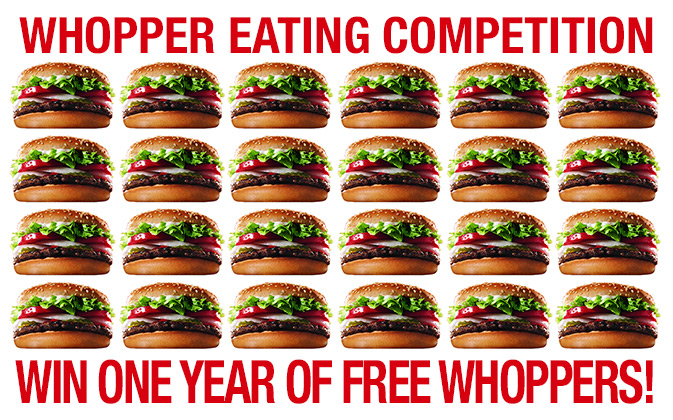 To celebrate the opening of Burger King, the company is sponsoring a hamburger-eating contest. Eighteen participants will publicly vie for a grand prize and the coveted title of Kunming's most competitive eater.

The eating contest will be divided into three rounds. Each will feature six participants attempting to consume as many Whoppers as possible in three minutes. The winner of each round will be crowned co-champion of the contest and awarded a year's worth of free Whoppers — one a day, for 365 days.

Burger King has reserved six spaces in the contest for GoKunming users. If you would like to participate, follow the directions below.

First, share this article, including its top image, on social media outlets such as Facebook, LinkedIn, Google Plus, Weibo or Qzone, where it is publicly visible. This can be done using the share buttons located at the bottom of this article or by going directly to the site of your choice. Next, send us the link to where you shared the article, as well as your full name and current phone number, to the GoKunming contact form.

Contest participants will be chosen at random. To be considered, submissions must meet the above contest requirements. Winners will be announced in the comments section of this article on Friday, February 21, and notified directly. 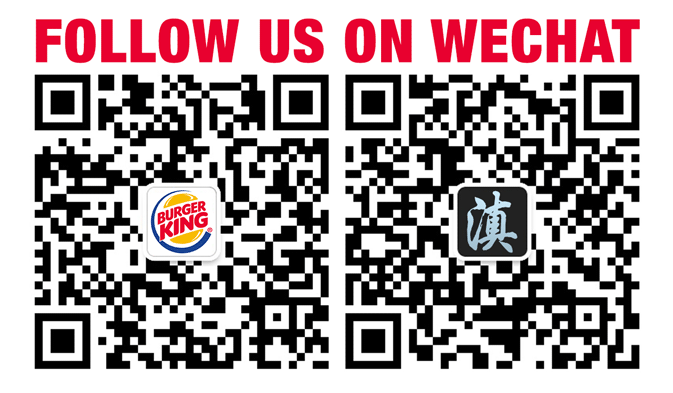 Starting February 22 and running through March 8, Burger King customers can simply follow the two WeChat accounts, go to Burger King and show the cashier they are following both businesses on their mobile phones. The first week of the promotion, patrons who do this will receive a ten yuan coupon and a soda free of charge. During the second week, customers will receive a free soda.

Is it just me, or does a "How many burgers can you force down Competition" seem a little inappropriate in a country where so many folk are undernourished and struggling to get by. I love a Whopper, but this seems a poor choice of event.

It equally seems inappropriate that in a country where people struggle to get adequate nutrition that by you have people driving jaguars & BMWs and innumerable Gucci/Prada/Louis Vuitton boutiques...not to mention the obsessions with smartphones.... c'est la vie I suppose.

More rubbish food.
A country that once was one of the healthiest in the world is now following the Made in USA path.

All sorts of illnesses that China never had some years ago. Most of it comes from this kind of food and dairy.

@Encrypted "Healthiest in the world" please give me a break. I won't argue with you that BK is unhealthy because it is, but it isn't any less unhealthy as smoking 2 packs of cigarettes a day while eating pieces of pig fat swimming in pig lard. China has one of the highest rates of heart disease in the world, and it has nothing at all to do with BK.

who in their right mind would eat a whopper every day for a year?

Seems Chinese are eating better. Soldiers are outgrowing their tanks and equipment. Reason: better nutrition over the last 20 years.

We have our winners! Hope to see you at the grand opening.

I would join if I was a fast eater...of all the chains you see outside of the US Burger King is definitely the best!

seahorse62 by "Healthiest in the world" I meant around the 80' (or one of the healthiest). China was very poor but when consuming only potato, rice, wheat, vegetables, fruits, etc there was no cancers in China at that time (or very few).

Then milk products, meat, and BK & company started increasing in China and all the deceases with it.

That's just facts. Of course it's not all because of BK but because of this meat/dairy industry. We see it everywhere now in China.

Smoking is worse for health but at least you only fuck yourself, not environment and killing billions of animals every year like meat industry does.

except when you're in an elevator or bus with someone smoking, then you do affect more than just yourself...

August 3, 2021 "Our kindergarten is looking for qualified and enthusiastic teacher to join our team starting at the end of this month. The school is location in 盘龙 …"
Travel Yunnan BlueBird