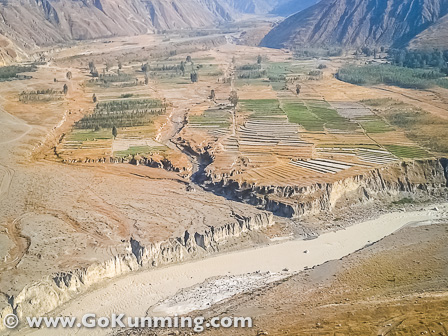 The Xiaojiang River, dubbed the 'milk river' by locals, as it flows toward the Yangtze

A river in Yunnan's northeast is receiving national media attention due to its rampant pollution. Local officials have taken the uncommon step of publicly apologizing on television for their failure to prevent pollution.

The Xiaojiang (小江) — or Little River — flows north through Dongchuan for 40 kilometers before emptying into the Yangtze River. Pollution from nearby industry has become so severe that the river now permanently runs a grayish white. Villagers in the area who use water from the Xiaojiang for crop irrigation have taken to calling it the 'milk river' (牛奶河).

The valley through which the river flows has at least 45 "mineral processing facilities", many of which dispose of their untreated wastewater by dumping it directly into the Xiaojiang. In response to mounting pressure from outraged citizens, Dongchuan District Vice Mayor Lin Hua (林华) held a press conference April 11 to address concerns of environmental degradation in the area. 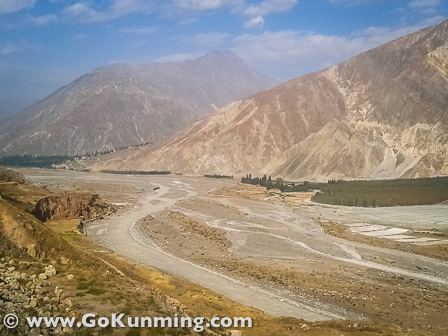 Lin announced that 28 factories have been shuttered pending an investigation. He also publicly apologized for the Dongchuan government's inability to curtail wastewater dumping and prevent what he characterized as "adverse public effects".

A local farmer, interviewed by television reporters, explained the river water had become almost useless. "It's too dirty. It's becoming more toxic and the contamination is getting worse. No one dares use it," he said.

Reporters from 20 national outlets covered the news conference and the story was broadcast on several nightly news programs around the country. GoKunming cycled through this area in January 2013 and can verify the condition of river.

Tailing dumps from mining operations in the mountains were visible from a distance of more than a kilometer. When we were there the river was running very low due to the dry season. The water was chalk white and looked almost chunky. We were amazed to see farmers diligently tilling plots of land on the river's floodplain eventhough the rocks and dirt were clearly stained an unnatural gray by mining and quarry runoff.

In his comments, Lin said a 24-hour hotline had been established for people to report dumping. All factories in the area will also be checked against existing environmental regulations and any water expelled from their operations will be tested by the Dongchuan Environmental Protection Agency. 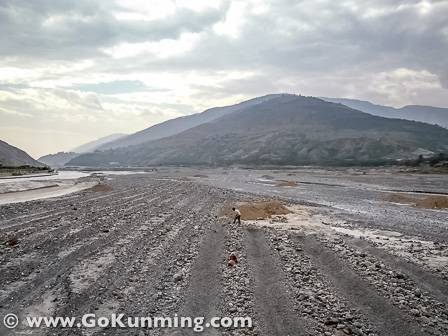 A lone farmer prepares land for planting beside Dongchuan's 'milk river'. The river can be seen at the far left edge of the photo

The Gejiu tinmines used to be famous for their slaves, (whole Yunnan in fact) some decades ago. Those slave kids were blinded by the pollution. Its a story forgotten, but part of the mining history of Yunnan.

And so are the minings that ignited the Panthay Rebellion.

Things have not much improved. The fact that Yunnan province is among the most mineral rich provinces in the Universe, doesnt leave much hope: its probably becoming even dangerous to live in Yunnan. How much cyanide in the morning shower?

If this river turned white the mistake was that it was noticed. There will be better ways to camouflage these things in the future.

And where is the blue sky that was decorating Kunming just recently? It was turquise blue, actually. And the old alleys of street culture with generations of shop owners. Playing chess on the street.

Maybe the "samba carnevals" will fill up the gap?

It is said that Beijing was born 1280 and died 2008. Kunming could be counted even older. The death is probably not far..?

Well, soon the kids of officials who have been educated in "Australias" nice universities will be in power, and bring new life to e.g. Xishan mountain, (Western Hills),maybe changde its name to "Blue Mountain" and introduce kangaroos there. Samba carnevals, kangaros, capuccinos done the right way, what else can one ask for...

Why dont they re name Dian Shi to Big Green lake??

Easy fix. Re-organize environmental monitoring along the lines of the anti-corruption police; send undercover people around the country from other locations to perform regular testing of all major waterways and air quality. And/or use robots to do it instead.

Let's not forget that Puer tea detoxifies. Its about time to double the daily Puer dose and change the five year old, to a tenner. Just need to find a distributor that doesnt sell fake Puer, - well, it might be better to drive straight to Yiwu and buy a bagful, to make sure the tea aint fake. To "detoxify" a bit from the recent chemicals that have been brought with the drought.

(Now, do not remind of all toxics in the tea cultivation, or it start to get too depressing. A placebo should do fine.)

i guess problems are psychiatric. from cruelty or indifference to madness it is a vicious circle

Eight mining executives from three companies are currently standing trial for their alleged roles in causing the Dongchuan "Milk River." Verdicts, and presumably sentencing, are expected by the end of the week.

Prison sentences and hefty fines for those responsible were handed down by a Kunming court on November 18.

One can imagine those guys having a chat: "Everybody is doing this, but we are made scapegoats".