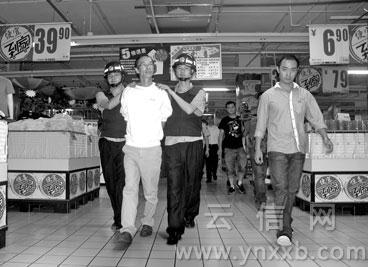 An unemployed man has been arrested in connection to the bomb threat that led to the evacuation of three Carrefour locations in Kunming on Saturday.

Kunming police arrested Yue Jinwei (岳金伟) of Songming County on Saturday night for allegedly telephoning a bomb threat to the Baiyun Carrefour location. Yue reportedly called shortly after 2pm demanding 300,000 yuan (about US$46,000) within the following 18 hours, saying he would detonate a bomb he had hidden inside the store if his demands were not met.

Carrefour employees contacted police, who began an investigation and evacuated the building, located on Beijing Lu just north of Baiyun Lu. The Yunfang Carrefour next to the old Luosiwan Market and the Longquan Carrefour at the intersection of Longquan Lu and Baiyun Lu were also evacuated, with employees hanging signs outside saying the stores were closed because a "system breakdown" (系统故障) had occurred.

Investigators reviewed video footage and other records and eventually identified and tracked down Yue around 9:45 pm, arresting him outside an underground ice skating rink on Beijing Lu in north Kunming.

Later that night police escorted Yue to the Baiyun Carrefour where he led them to a fake bomb constructed from a cardboard toilet paper tube that he had hidden in the toy department. No evidence of explosives was uncovered and all the stores were open again by Sunday morning.

Saturday's bomb threat brought back memories of the two bus bombings that took place in the spring of 2008 and the explosion that occurred at Salvador's Coffee House in the autumn of the same year. The bus explosions killed two and the café explosion fatally wounded bomb carrier Li Yan who reportedly confessed to the bus bombings on his deathbed.

Evacuations at foreign-invested shopping centers in Kunming are not new. In May 2009 the Xiao Ximen Wal-Mart location was evacuated after it received an anonymous bomb threat. In December 2008 a police sniper shot and killed a man - who had stabbed three women and taken one hostage at the Longquan Carrefour location - after luring him out with a bowl of rice noodles.