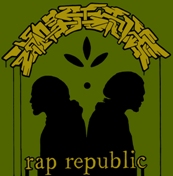 One of Kunming's newer and most interesting musical acts, Rap Republic is composed of MC/producer and Kunming native Tang Renti and Kunming resident alien Mike Wind. In recent months the group has released a well-received demo (with a new album expected in early 2008) and was one of the show stealers at the Kunming Outdoor Music Festival.

Tang Renti's smoke-'em-if-you-got-'em beats explore a wide range of moods and styles — it's no stretch to say that he has emerged as one of the top hiphop producers in China. Mike Wind's solid vocals and stage presence are complemented by Tang's unique flow. The back-and-forth between Chinese and English lyrics - both MCs are bilingual - creates one of the most unique and accessible hiphop shows on the mainland.

—>Rap Republic plays at 8:00 tonight at Yuansheng Studio, which is located next to TCG Nordica in the center of The Loft (创库) art compound at 101 Xiba Lu, next to the Baiyao Chang (白药厂) bus stop.

The stupid combination of rap wasted nearly an hour,so i could not have enough time to watch all the movies. I had to leave before midnight.
I realy like the type of music performance,but not that chinese actor which let me think of how harmful effect of drugs or how hard we must struggle against aids.i dont like the people who has a decadent body . I wonder that chinese could stretch his body slightly!
At the end i have to mention the last movie which i couldn't have more time to finish watching. The ending part of the movie,i guessed, is about a "goodlooking" africa lady as here chinese XJ .but she can speak fluently english,most like some chinese student .sometimes she could not understand the visitor,so at this time the english subtitle will appear.
I have heard or seen that she must be payed after slept with man .The white men are her favorite because of " I'm goodlooking".
She is open and laugh in front of visitor's camera.
And "I won't leave africa,leave my country." is the point which is obviously different to chinese student which always want to say "Bring me to your country"
On my way home i remember one of the warning text of the RAP republic to the audience " don't sell your body... " .

It's a big challenge for me that so clear-headed warning text is sung by a so sad body.