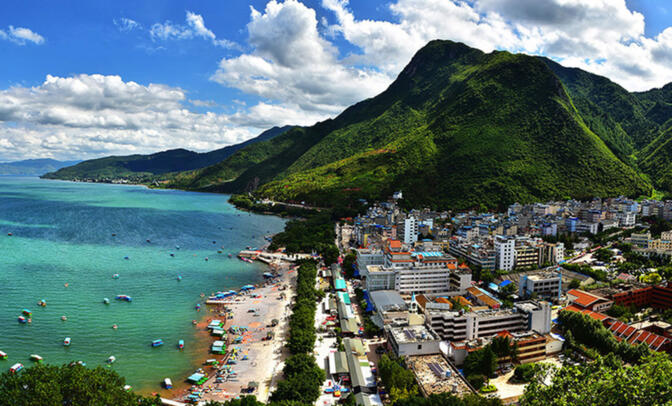 Fuxian Lake in Yunnan has long been known for its clean, unpolluted water. Motorized boat traffic was phased out years ago and, despite the serious development of shore-side businesses over the past decade, the lake remains one of the most, pristine bodies of water in southwest China.

Despite existing safeguards, the government of Yuxi Prefecture, where Fuxian is located, has banned swimming in the lake for the foreseeable future. A related preliminary announcement was issued October 9, and put into effect 11 days later at midnight on October 20.

A reporter from Kunming newspaper Metropolitan Times tracked down "the relevant person in charge" and was told reasons exist for the newly enacted prohibition. The relevant person explained that concerns over pollution were one important factor, as were Fuxian's status as a "strategic national water reserve" and the rising prevalence of accidents involving tourists.

The first of these considerations revolves around a national policy more so than it does a localized decision in Yuxi. As the most populous country on earth — 20 percent of the global total — China suffers from a severe lack of fresh water, having access to less than seven percent of the world total. As per capita use across the country continues to increase, it is expected China will need to begin importing water from other nations in the near future.

Fuxian, along with many other clean bodies of water across the Middle Kingdom, have been labeled both strategic and protected at a national level. The ban on swimming at Fuxian, said the relevant official, reflects President Xi Jinping's edict that national water management must stress "government protection first, guided by scientific planning and green development".

The second major reason for stopping people from getting into the waters of Fuxian Lake may be the most surprising — safety. Each year, hundreds of emergency calls are made to Fuxian search and rescue personnel and medical first responders. Those numbers have grown in the recent past and now typically top 1,000 annually.

Beaches will remain open at resorts and scenic areas ringing the shore, but entering the lake in any fashion is now disallowed, for most. There are reportedly 1,960 boats licensed to ply the waters of Fuxian, but only those associated with the provincial SCUBA diving club are allowed to conduct activities in the water. For the time being, enjoying the water at Yunnan's cleanest lake will have to be done with tanks of air and rebreathers.

So the idea is that swimmers pollute and that swimming is dangerous? What can the boats do that do NOT belong to the scuba-diving club?

I used to sail there. There is a small beach on the north shore and a small chicken egg producer. You could smell the chicken sewage in the water as you launched and recovered the boats.

Hopefully somebody will be paying attention to this kind of thing while they are busy banning those polluting swimmers - or is the water in fact not clean enough to swim in? My impression is that it is clean enough.

Protecting the ecology of the lake is important, but protecting incompetent swimmers is just as vital.

The proficiency (lack of) of Yunnan swimmers is troubling, to speak nothing of other provinces. Too many undocumented drowning incidences of dragging ashore loved ones without a pulse, rarely reach pulse of nation. Drowning occurrences are particularly pronounced among beach-goers amidst China's travel boom across SE Asia & beyond.

Mandatory swimming courses & tests need to be implemented by the education ministry as a high-school graduation requirement. Greater budget allocation for swimming facilities would be helpful in that regards.

If they decide to jump into a lake without knowing how to swim well, then they are too stupid to live anyway, if not by drowning then they would probably die while jumping from a moving car, running across a highway, or from drinking water that has collected in the garbage can, why should I spend my money to teach such stupid people, it's just a waste of money. The money would be better spent trying to save children from eternal damnation.

Now what kind of morality is that, Keebler?

Elk's morality sounds like a variety of muscular Christianity. Sink or swim. Paradoxically not far away from the doctrine of the Survival of the Fittest. Social Darwinism without Darwinism.

And where are they supposed to take these classes? What high school in Yunnan has its own swimming pool?

If they want to protect the waters of China, they should target the factories dumping waste in waterways and farmers using dangerous chemical pesticides.

@geogramatt I've noticed they like to start as early as nursery (like my sons class) in some places now so that's got to be an improvement in thinking. I remember back in the day as a 5 year old starting swimming lessons in the UK. We never had our own school pool but would be taken to the local swimming pool on lesson days.

oh and that was 35 years ago lol

We had mandatory swimming lessons in primary school. One school had a small 25m pool, that sits on the ground and is about 1m deep. But that was 50 years ago.