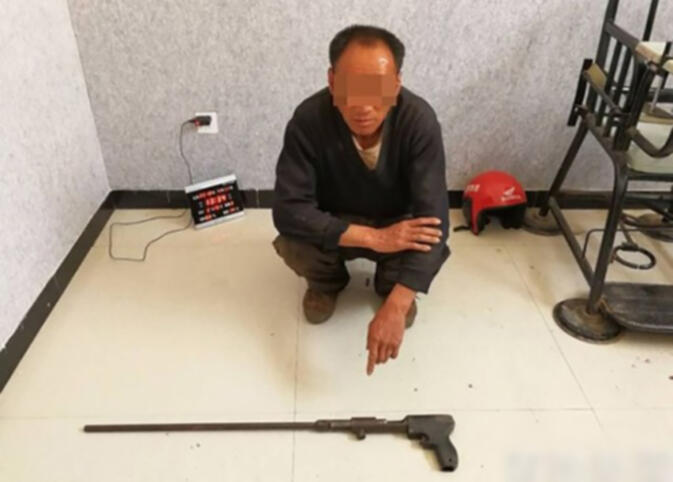 File this one under bizarre. Weapons, alcohol and gonads are a testy combination. A police report made public in northeast Yunnan's Zhaotong Prefecture reveals that three friends — apparently very inebriated from pounding baijiu for several hours — decided to shoot at each other with a homemade gun in a game of one-upmanship. The result? Hospitalization due to a pierced testicle for one, and brief jail time for the other two.

The three men in question gathered for drinks on April 11 in the small rural town of Songshu (松树村), roughly 30 kilometers northwest of the prefectural capital, also called Zhaotong (昭通市). Somehow, the trio began aggressively arguing over who was the best shot with guns — on its face a slightly odd argument, as civilian access to guns, even air-powered versions, is strictly controlled across China.

In order to settle the dispute, the owner of the house, a man surnamed Li, borrowed a modified nail gun with a long barrel from his neighbor. After first attempting in vain to shoot a glass off of the top of a door frame, the men's enthusiasm evidently began to flag.

To rekindle their shared passion for inanely drunken disputes, a second Mr Li volunteered his crotch as the next target, reportedly antagonizing his two friends by yelling, "I bet you can't shoot me in the groin!" The gauntlet thrown down, a third man named — no, not Li, but Nie — rose to the challenge. Mr Li number two stood away from the shooter and, in a fit of comic destiny, dropped straight to the floor as the first shot found its mark.

Luckily for all involved, the modified nail gun had been loaded with dried beans, rather than actual bullets or nails. As the second Li writhed in pain, his two compatriots began a new line of disagreement — whether or not to call someone. The police were eventually summoned and the injured Li whisked away to a nearby hospital.

The neighbor who originally provided the gun was arrested for "concealing illegal firearms". He has since been released. Meanwhile, the wounded Mr Li has left the hospital minus his pride. Nie, who shot Li, remains under investigation after a short period of incarceration for assault.

Shooting each other's ball of at least stops them from breeding.

A nail gun loaded with beans and he strikes wrinkled old testicle 1st shot (while pissed)! WOW, he's been whisked off for further sniper training with the PLA lol.

"Always be a good boy, don't never play with guns.!-