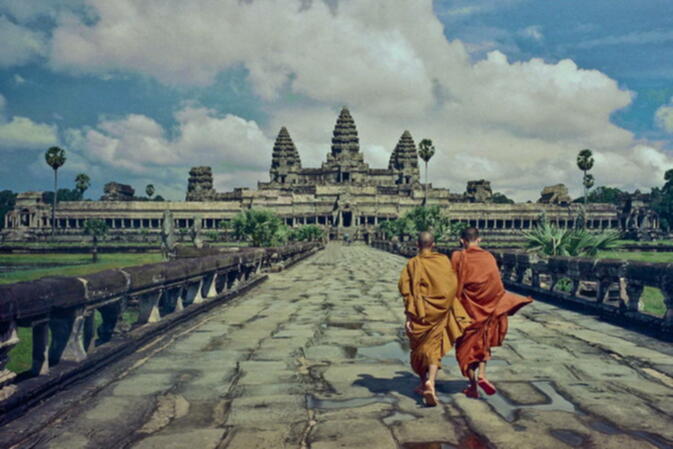 A Yunnan-based conglomerate will design and build a new airport expected to cost nearly one billion US dollars near Angkor Wat, according to a report by Cambodian newspaper Inquirer. The five-year project is yet another example of China exporting engineering and technological know-how as part of the country's sprawling Belt and Road Initiative.

Construction work on the facility is slated to begin early next year, with the new airport replacing an existing one near the iconic 800 year-old ruins of Angkor. The UNESCO World Heritage site's already existing airport — Siem Reap International — is only a kilometer away from some sections of the tourist destination and the government has decided to move air traffic further away and simultaneously upgrade services.

Quite a bit further away, it appears. The new airport is slated for Sot Nikum District, 50 kilometers east of Angkor. The US$900 million project will be overseen by Yunnan Investment Group (云投集团), a state-owned Chinese consortium that is one of the largest companies in the country. The airport — tentatively dubbed Siem Reap New International — is expected to receive its first flights by the end of 2022.

It will be built on a parcel of land covering 750 hectares, and is expected to be able to handle up to ten million tourists per year, a number it may never need achieve. An estimated 2.2 million people visited the Khmer religious monument in 2016, marking the fifth straight year of sluggish tourism sector growth.

Nonetheless, Cambodian Prime Minister Hung Sen told reporters last month, "Our target is to reach about seven million foreign tourists by 2020, and we firmly believe that we can reach it." To accommodate the expected masses Phnom Penh has signed off on the new Siem Reap airport and land clearances and survey work are both already underway. As part of the deal, Yunnan Investment Group will acquire a 55-year operational lease on the entire property.

Across its many many subsidiary companies, Yunnan Investment Group has extensive experience building and running hydroelectric dams, mining sites, highways, airports and other large-scale ventures. Those sorts of skills are exactly what Beijing is looking for as President Xi Jinping's Belt and Road Initiative spreads to more than 60 countries. One of the central tenants of Xi's signature strategy is to "Bridge the 'infrastructure gap' in Asia and beyond."

China has, for the past two decades, acquired the skills and reputation of speedy master builders. With much of the country overbuilt or depleted of resources, the next logical step is exporting knowledge to less-developed nations. For Cambodia, this equals a new airport, while for Yunnan Investment Group and other similar companies, it may only be the tip of the iceberg.

55 years seems to me to be a helluva long time for a foreign private(?) company from an economically and politically powerful country to run an airport in a weak one.

Seeing as said foreign country's company will probably pay for most of it, 55 years may not be so long, when you leverage risk factors. However, seeing as most tourism will be inbound from said country they should get a return.

The alternative is probably no airports, and no big (probably massive) increase in tourism revenues.
It would probably be a good idea to visit these places before they are consumed by the tourist industry.

Too late for Angkor. Already consumed. Siem Riep never had much character before all the 5 stars showed up, so an even greater influx won't ruin the town. Of course, if a new airport means low cost carriers can fly there too, I'm all for it, after all, I just want a cheap seat!

On the other hand, how many airports does the world need?

yes, im sure you can cycle to angkor

Think I'd rather go by road, I might see or learn something unexpected.

cycling by road would be preferable on a long journey, better than mountain trails anyhoo