Lijiang bug-eating contest draws national attention, and that may be the point 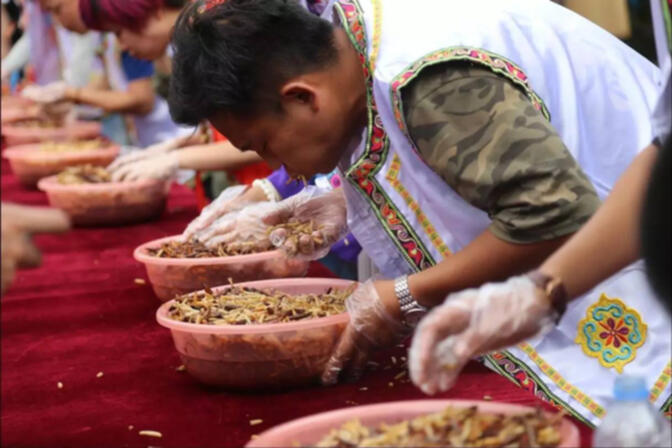 In one of the more odd and creative public spectacles in recent memory, the Lijiang Tourism Bureau held a promotional event where contestants ate enormous numbers of bugs. Although munching on any number of insects is not rare in Yunnan — or elsewhere in southern China for that matter — forcing as many as possible down in a short amount of time is. Until now.

The contest to see who could consume the most insects was part of a larger gathering organized at Qianguqing (千古情), a giant man-made recreation and amusement park six kilometers outside of Lijiang Old Town. The 'bug-eating event' was reportedly held as a way to celebrate Saizhuang Jie (赛装节), an annual Yi minority tradition held as a way for eligible young men and women to meet.

Typically, the Yi turn out in large numbers, dressed in lovely handmade garments. This year they were joined by several hundred tourists, there to witness indigenous culture as much as they were to see a bug-eating contest. Contestants included "people from around China", many of whom remarked to reporters it was their first time trying such a dish.

After five minutes of furious action — over which several participants gave up entirely — a young Chongqing man surnamed Peng was declared the victor. He was able to consume a gut-busting 1.23 kilograms of fried insects, mostly bamboo worms and crickets. For his efforts, Peng received a small 24-carat gold bar roughly the size of a cigarette lighter. He also made headlines across China.

And that may have been the point of the entire exercise. For two decades Lijiang merchants and landowners have reaped the rewards of an ever-growing tourism boom. Government coffers also filled up with money collected from taxes and the sale of gate tickets. But recently that upward trend has slowed as the region — once one of China's most visited tourist spots — developed a reputation for price gouging and gimmicky over-crowded streets.

The insect-eating event won by Peng put Lijiang back in the national spotlight, for one news cycle at least. For the first time since a string of nasty assaults on tourists further damaged the hotspot's reputation earlier this year, the press coverage this time is upbeat and generally flattering.

More of the same should be expected, as not just Lijiang, but locales across Yunnan province, have been instructed to "develop tourism resources" to help "raise people out of poverty". This typically involves highlighting ethnic cultural events by turning them into expensive and photogenic spectacles designed to draw in tourists. Eating bugs, it seems, may only be the beginning.

Crass nonsense. 'Entertainment' tourism...can't anybody think of anything other than 'entertainment' anymore?

as they say in rome, give them bread and circuses.

Just watched Joey 'Jaws' Chestnut win the 2017 Nathan's Famous Hot Dog Eating Contest. He downed 72 hotdogs and buns in 10 minutes for his 10th All-Time win. My hometown favorite, born in the hospital where my sister is a nurse, Geoffery Esper, came in fourth at 46 devoured dogs and buns.

Held on the 4th of July, and live on ESPN2, this was the "over 100th" contest with Chestnut winning ten of the last eleven.

As this event from Coney Island in Brooklyn, New York is truly one of the greatest American events of the year, I'd like to wish all Americans a happy 4th of July and, to those of the Canadian persuasion, a belated Happy Canada Day!