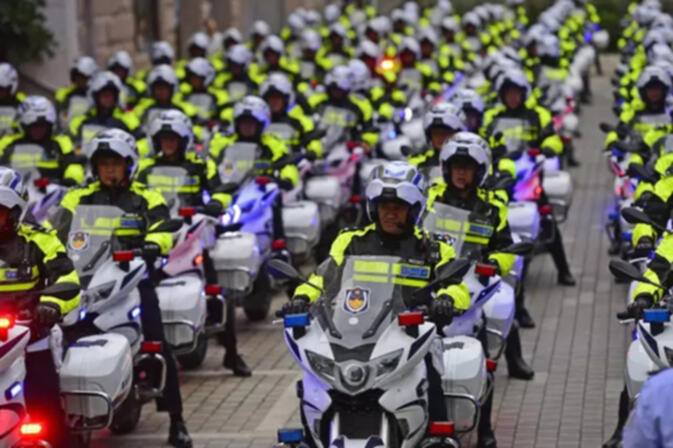 It is no secret that the Spring City has a traffic problem. Many have tried interesting and creative ways to corral the city's me-first automobile and e-bike drivers. Many have failed. However, a new computer-driven push to solve the car conundrum — or at least penalize the worst offenders into contrition — got underway at the beginning of this week.

Central to the plan are 52 traffic infractions, which range from minor violations to dangerous offenses. While most of the regulations have been around for years, drivers found guilty now face more stringent fines, as well as greater deductions from their driving scores. Adding to the new scheme's clout is that the process of identifying and fining bad drivers is becoming more and more automated.

Beginning on May 22, the municipal police began using a cloud computing system hooked into the city's extensive surveillance camera network. Within the first 16 hours, through a combination of human and computer-assisted toil, more than 5,000 drivers were remotely caught breaking at least one of the 52 traffic rules — a rate of 312 per hour.

Automated driver score point deduction notifications were then sent to whatever address was provided when a given driver obtained a license plate. The messages also included a court date for those wishing to dispute fines, as well as how many points the offender had been docked.

Chinese law stipulates every licensed driver is allotted 12 points annually. Conviction of a traffic offense subtracts from this score, and if a person's total hits zero or below, their license is suspended until they complete remedial driving classes and successfully retake a road test. The new Kunming point deduction system is separated into five sections, each with its own penalties. Below are samples from each classification.

12-point deduction:
• Driving while intoxicated
• driving 50 percent or more over posted speed limits
• driving without a license plate or using a fake plate
• overloading the maximum passenger occupancy of a vehicle by more than 20 percent
• Fleeing the scene of an accident
• driving the wrong way on a highway
• making a u-turn on a highway
• transporting hazardous waste continually for more than four hours without a 20-minute rest

6-point deduction:
• Driving through a red light
• parking in an emergency lane
• driving 20-49 percent over posted speed limits
• driving on a suspended license

Noticeably absent from this list is driving at night with no lights, a common practice in Kunming, and one for which offenders will only be docked one point. A full list of all 52 infractions can be viewed here in Chinese.

The city has also trained and equipped 250 "mounted police" (骑警), who are kitted out with black and yellow uniforms and new 300cc motorcycles. The city began purchasing the motorcycles in October of 2016 and plans to buy a total of 1,000 by the end of this year. Hopefully, the combined force of these efforts will at least make drivers — such as the one who once drove over a pedestrian overpass while honking impatiently — think twice.

About time. March of progress, etc. I'd still rather walk or take the bus, causes fewer problem.

As a car driver, e-bike driver and pedestrian I've found the recent crackdown to be in equal parts laudable and annoying. The enforcers can at times get very petty (I was made to reverse my e-bike 50cm behind a painted line when my front wheel dared to touch it) but the new fences and umpteen traffic cops everywhere should make things safer, once folk get used to it.
A mere 1pt deduction for driving the wrong way down a road. That's funny!

I got fined 50rmb for riding across a road NEXT TO the pedestrian crossing (rightly so - I was in the wrong) but as I was leaving at least 2 guys were getting visibly upset with the police, 1 woman was crying and another was screaming angrily. Since then they just make people walk their bikes across. The problem is that the police are only at one junction on Beijing lu... everywhere else is still as it always was and once the police leave at about 6pm even that one crossing reverts to the usual craziness. This education is going to be a long process!

Same Beijing Lu junction cops fined me for spitting on the street. Fine 50 yuan also. Gave a hundred and they had no change, and while waiting for change, a huge curious crowd showed up. :) Singapore? No, Kunming. Apparently it depens on "where" you spit. This was a sensitive area, and didnt know it.

Have noticed a marked improvement on the way things are done this week, so I'm happy. Any progress adds up over time to get closer to that point we'd all prefer.

Why no points lost for all those assholes who drive on the go left lane till the front of the go straight que and then squeeze into that lane?
Or does this fall under driving the wrong direction?

Noticed those motorists cops.
They were sitting in one of these police boots playing with their phones while their bikes outside were nicely lined up with their engines running.

Might explain the recent high pollution levels in KM ;-)

walking in the city and especially crossing the street is still the same suicide as before...

@hanshan: Pretty much true, so far. But you get used to it.

Goodness, there are traffic cops, fences and cordons everywhere! Slows my progress a bit, but seems to be a lot safer overall. Wonder how long it will last?