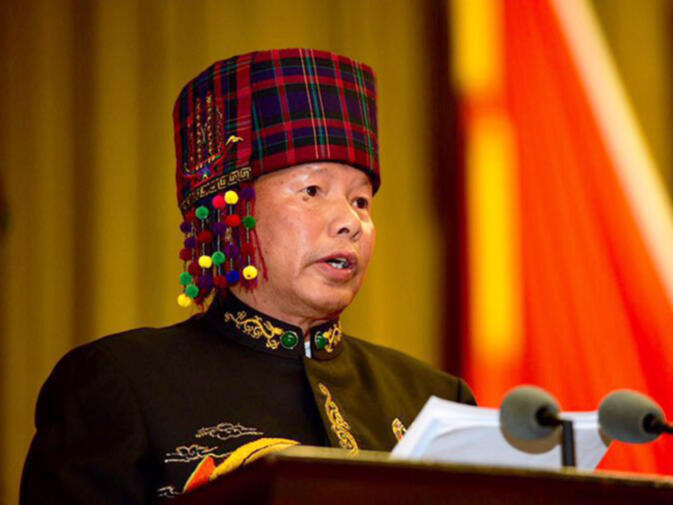 Immigration is on the mind of many a world leader these days. While not yet having risen to that level of pre-eminence, thoughts of how to properly deal with people illegally crossing Yunnan's border from Myanmar have been occupying Yu Mayue (余麻约), director of the Standing Committee of the Dehong People's Congress. He raised the issue in Beijing, as leaders from around the country met for the fifth session of the Twelfth National People's Congress (NPC).

Yu — who is from the Jingpo minority — made his remarks on March 6, explaining how thousands of undocumented female immigrants in his far-western Yunnan prefecture live in an untenable legal gray area. Upon the completion of a government-funded survey, Yu estimates between 20,000 and 30,000 Burmese women live illegally in Dehong — almost all of them married into Chinese families. He explained to reporters covering the NPC:

Because our country has no specific policies to deal with such situations, [these women] cannot acquire a hukou, or receive medical or social security insurance...local governments would like to help them and lift them out of poverty, but their lack of identity papers creates barriers as people without ID or hukou are not entitled to benefits.

A hukou (户口) — or 'household registration' — is issued to every Chinese person by their local Public Security Bureau just after birth. Holders of household registrations must then obtain a national identification card, a necessity which makes children eligible for public schools and is the only form of ID accepted when adults apply for jobs, purchase insurance, obtain driver's licenses, get married or attempt to buy or rent property.

In other words, a hukou is a necessity for all Chinese citizens. However, the women Yu was speaking about cross the border illegally and then often marry Chinese men and start families. Although not discussed, but almost certainly implied by Yu, is the fact that the children of these women are also locked out of the Chinese system — and cannot even be born in hospitals — at least through normal legal channels.

Representatives from Dehong and Lincang may currently be able to make stronger cases for reform in Beijing than the other Yunnan frontier representatives attending NPC meetings. Both prefectures have seen thousands of Burmese refugees stream across the border in recent months as people flee renewed violence. A long-standing civil war in Myanmar's Shan State seriously escalated just as Chinese bureaucrats gathered in Beijing — with fighting clearly visible from Chinese border towns.

Instability in the region, therefore, may swell the numbers of Burmese men and women looking to stay in China long-term, intensifying Yu's concerns. "We are pushing for legislation to better handle illegal immigration issues, but it's complicated and requires thorough study," he said.

How are they able to get married without legal papers? Passports, previous/current marital status, etc.

Either in Myanmar or through ceremonies not recognized by the PRC.

You can meet Chinese men in Laos all the way from Sichuan looking for a wife. Considering the strict border controls today, and check-points, there is still some way to get this done. Same with vietnamese wives. So why are Burmese different. Most likely the problem is they cant get ID or passport in Burma. Which is needed for the legal process in China. It used to be nearly impossible for ordinary Burmese to get passport just some 10 years ago, recently it has become easier, but someone from some Shan border tribes can probably forget about it.

Take care of any civilians fleeing war zones and do whatever is necessary with the bloody hukou system to make this happen.

NB: Jingpo people are more usually called Kachin in English. The present-day border cuts the Kachin area in half, but borders in even the recent past were not fences, keeping people in or out. The "Burmese" refugees maybe ethnic Kachins joining distant relatives.