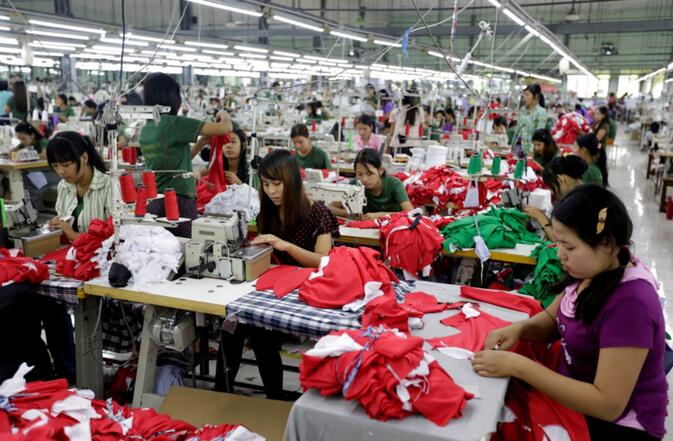 Myanmar is in the midst of extremely tumultuous times caused by a quick jump to representative democracy coupled with a slew of historical problems. At times, such multifaceted concerns have put the Southeast Asian country's government at odds with that of its largest trade partner and longtime benefactor. The newest incident — the destruction of property and brief detainment of Chinese nationals in Yangon — highlights simmering anger in Myanmar over China's influence in the country.

The international row erupted over the weekend after "hundreds of Burmese employees" reportedly descended on a Chinese-owned garment factory in Yangon, smashing windows, doors and production equipment. The striking employees confined seven Chinese managers at the Hangzhou Baiyi Textile and Garment (杭州百艺纺织制衣有限公司) factory to a dormitory room for several hours. The men were later released following negotiations led by local police.

Press accounts vary as to the cause of the riot, but the South China Morning Post reports workers were upset by the firing of a Burmese employee at the factory. Regardless of the root cause, the strike was well-coordinated. Security cameras were disabled early in the morning before workers began ransacking the facility around 7am local time.

Firsthand accounts posted online by Chinese managers at the factory claim nearly everything of value at the facility was destroyed. None of the 'captives' were harmed, and following their release, striking workers continued to occupy the factory.

The disturbance prompted Beijing to issue a public condemnation through its embassy in Myanmar. A statement prepared by China's Ambassador to Myanmar, Hong Liang (洪亮), demanded Naypyidaw's "prompt and effective action to punish the perpetrators, and ensure the safety of Chinese nationals and the properties of the Chinese enterprise". The Burmese government responded, saying it would work to quickly protect Chinese interests within its borders.

The factory incident in Yangon comes as relations between Myanmar and China continue to fray. Fallout from an ongoing civil war on the border with Yunnan province has repeatedly incensed Beijing. Meanwhile, Burmese officials and citizens alike are increasingly vocal regarding concerns over Chinese-funded infrastructure projects and what they see as the expropriation of the country's natural resources by Chinese companies.

Although Beijing does routinely attempt to deal with such issues, much of the responsibility for mending rifts in bilateral ties through soft power initiatives has fallen to bureaucrats in Yunnan. Of the three countries bordering the province, China has contentious relationships with two — Vietnam and Myanmar, where public sentiment has turned against many mainland policies — with Laos the lone happy confederate. For years, development money has kept these countries tightly within China's sphere of influence, but it now appears reforging old bonds may necessitate far more than bank loans and railways.

Article says Laos is lone happy confederate. This could be debated, but its too sensitive :)

As far as I can see none of the reports cited have anything from the workers' point of view. Might be worth looking into that.

@ Peter: I agree - 'lone happy confederate'? Maybe in Vientiane government circles; elsewhere, the average person doeswn't think about it, tho in Luang Namtha, for instance, I've heard some resentment from local people.
@ Trapeze: I agree - have always thought that occupation of a factory by workers does tend to indicate that they have a rather definite point of view.