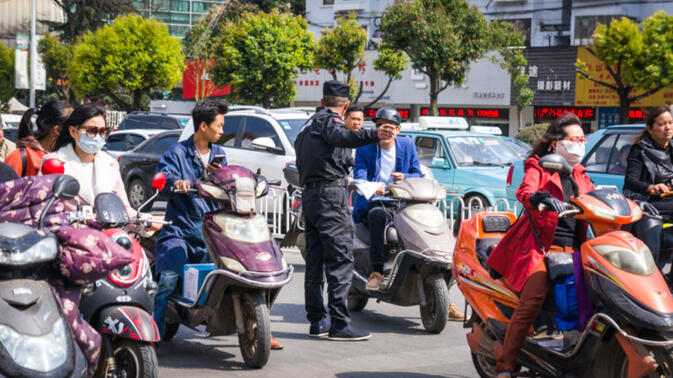 If you happened to be around Dongfeng Square (东风广场) or other high-traffic areas in the city yesterday, you may have noticed a flurry of friendly police activity. Officers were out in force attempting to convince ebike owners to register their vehicles and have an anti-theft global positioning tracker installed for the nominal fee of 150 yuan.

The effort was part of a new citywide program called the Kunming Internet Motorized Two-Wheeled Vehicle Intelligent Anti-Theft Management System (昆明市物联网二轮电动自行车智能防盗管理系统正式启动). Using "cloud computing and big data technology", the network allows police to track any registered vehicle in realtime within the city limits and beyond. The initiative was instituted as both a large-scale crime deterrent, as well as a new means for law enforcement personnel to track down stolen ebikes and return them to their rightful owners.

Kunming has an estimated two million motorized bikes and, according to a press release, the anti-theft effort is a response to a marked increase in ebike-related crime. While the city has long maintained a reputation as a hotbed for bicycle and ebike theft, reports of larceny and violent incidents are on the rise. 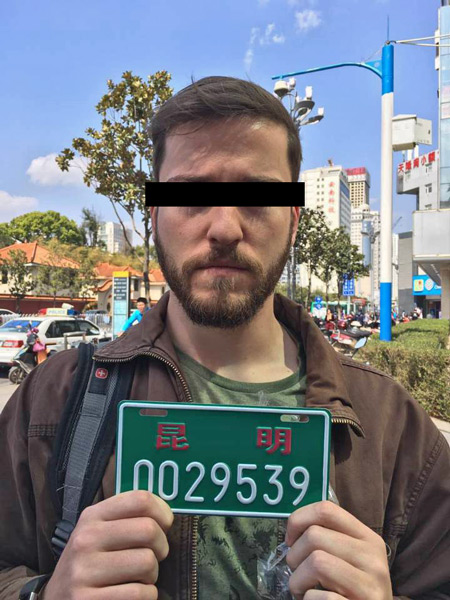 While registration in the new program is not mandatory, law enforcement officials highly recommend enrollment. Those who sign up must pay 150 yuan, which covers administrative costs as well as the purchase and installation of a GPS tracking device. This can be accomplished at many local Public Security Bureau offices — a short list in Chinese is available here online. Foreigners can use passports as a form of identification, while Chinese are required to provide their national ID cards.

We spoke with O'Reilly's Irish Pub numbers man and venture capitalist Teddy Bowers who went through the process in Dongfeng Square on February 22. He explained the police were extremely cordial and even had dogs for people to play with while they waited. Bowers' experience lasted about 50 minutes, largely because the officers in charge of filing registrations were overwhelmed with requests. At the end of the process his diandongche was equipped with a new GPS device and a shiny green license plate.

Any person who is signed up for the program who has their ebike stolen needs to report the theft as normal to the local police. If the authorities cannot recover the vehicle within 60 days, the victim will receive cash compensation. The 'refund' amounts to 1,500 yuan if the ebike was demonstrably bought within the past year, while owners of older bikes up to three years-old receive 600 yuan.

There are no current statistics available regarding how many have signed up for the new program. However, several local newspapers have recently run glowing reports of stolen ebikes recovered and returned to their rightful owners in only a matter of hours. 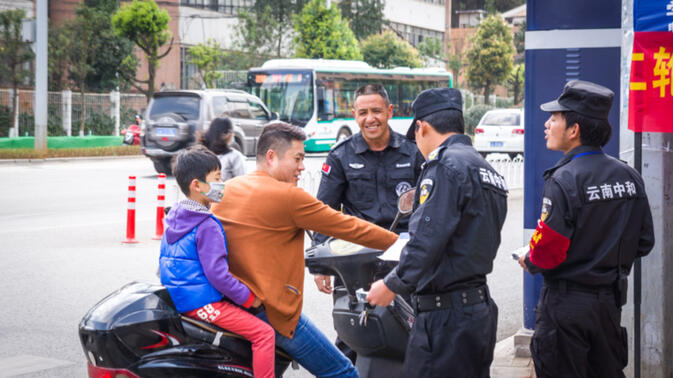 Very pro active. I hope this works out long term. I was surprised to read compensation insurance is included in the one time 150 fee.

great idea, big data being used to benefit. and so cheap for gps. makes people regiseter and gives a benefit in return. also an incentive to not ride like a dick and through red lights

Sounds like a great way for the gubmint to keep tabs on people...especially pesky foreigners overstaying or working on school visas.

like you dont carry your mobile with you. if they want to they can, they don need a gps on yer bike.

According to the linked article, you don't need an official Fapiao to register. The Fapiao is only used to establish that the bike is new and eligible for the higher theft payout.

This is an improvement from the original registration drive, where the bike couldn't be registered without a whole bunch of paperwork, most of which the dealers weren't providing.

Of course it makes perfect sense that the city is mobilizing the entire paichusuo network and encouraging a few million people to register their bikes just so they can keep tabs on your visa situation. It's not like they don't already have that information sitting in a file at your neighborhood paichusuo where you have to register...

cameras, cameras, everywhere cameras. You think they are not watching, especially with facial recognition software now.

Xiefei, of course the system is designed to be able better monitor everyone's movements, not just foreigners. Everyone knows you can easily be tracked with your phone. Now there is yet another tool to keep better tabs on you. I won't be putting one on my bike, thanks.

I was just taking a cheap shot at those abusing student and travel visas.

Granted that GPS can be used to track people on ebikes, but there are so many ways to be tracked these days (cellphones, license plates, street cameras, etc.), many of which are virtually unavoidable, that I'm not going to worry about a GPS on an ebike.

Better than Europe, letting in milions of people without passports, not tracking them, giving them money and lodging. Europe must be the most stupid continent in world history. Just be glad you are tracked, unless of course, youre a drug dealer or similar. Over here in Europe - where cultural marxists, feminist fools, anarchists and alike have taken over - we are envious of the tracking and control over there.

My appreciation of the advantages of tracking depends on my trust of the trackers. For ebikes in Kunming, I tend to trust the present effort because I think it will help locate stolen etc. ebikes - tracking of individuals can be, and is, done in more effective ways, and I don't particularly trust the goals of the trackers engaged in such. So I attempt to avoid them when it seems worthwhile to bother about it, but I don't have any serious worries about it in the current social environment. But then all environments are undergoing constant change.