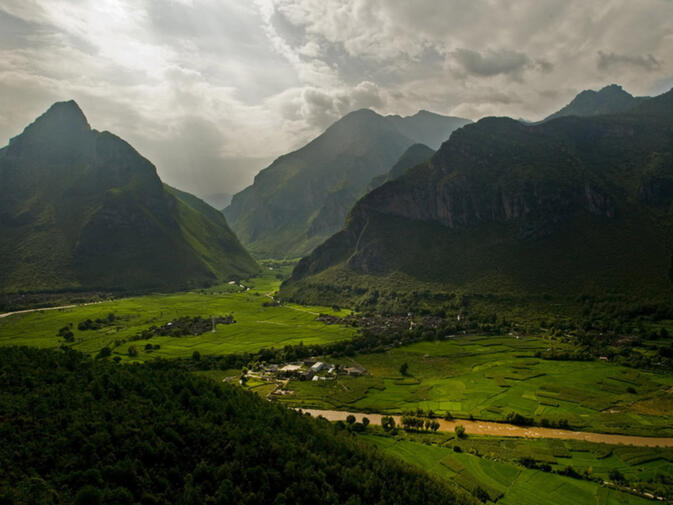 The Chinese government last week issued sweeping yet vague changes to the country's development policy, outlining a nationwide program to protect the environment. Of central concern are "natural areas with important ecological functions", which, according to the new policy, must be identified and protected in every corner of China by 2020.

Protection of the soon-to-be-designated regions will be inviolable, places where current and future "development is strictly prohibited". The move comes as vast swathes of the country, and especially the industrialized northeast, have suffered brutal and sometimes debilitating pollution levels typified by this winter's 'Airpocalypse'.

But the "ecological red lines" Beijing is currently pursuing aim for far more than bringing air quality levels under control. Made public by the Central Committee of the Communist Party of China in cooperation with the State Council, the edict encompasses nothing less than every section of the country

...important to water and soil conservation, biodiversity, wind-breaking and sand fixation, as well as ecologically fragile zones prone to soil erosion, desertification and salinization...By the end of 2020, the demarcation of the border and calibration of the regions should be completed and an ecological protection "red line" system will be basically established.

While most of the country has just under three years to decipher and implement the new regulations, as of now there are few hard and fast guidelines to follow. No announcements have been made regarding failure to protect natural places, nor have any new laws been issued regarding people or companies that may violate the policy in the future. However, the government of Sichuan last year placed 197,000 square kilometers of land — or 40 percent of of the province's total area — under conservation, an action which although still in its infancy may provide other provinces and administrative regions with a blueprint.

Some places in China where environmental degradation is extremely pronounced have an accelerated timeframe. Specifically, Beijing, Tianjin and Hebei, as well as "regions along the Yangtze River Delta Economic Zone" must complete their red line assessments before the end of 2017. Such haste epitomizes just how dire China's environmental situation has become, and the State Council report goes as far as obliquely criticizing 30 years of pro-growth ethos, declaring, "unfettered development at the cost of the environment has had its day".

If as ambitious as President Xi Jinping's two other signature projects — the Belt and Road Initiative and a nationwide anticorruption campaign — are any indication, provincial governments will be severely tested while trying to live up to the expectations laid out by Beijing. Nonetheless, the "red line" policy looks primed to affect nearly all aspects of the Chinese economy for years to come.

Its amazing to think about it. A country that has (had) an unique cultural history with a very sublime relation to nature has more or less totally destroyed both the nature and the sublime realtion there was.

Sublime relation to nature in art and in numerous traditional popular practices, perhaps. However, it was already obvious to numerous Western travelers in China in the 19th century, including some who came to Yunnan, that deforestation in China had long bee seriously damaging the landscape - and note that such issues were a hell of a lot less issues of concern in Europe in the 19th century than they are today. The PRC government banned much forestry in 1997, and although this policy has not always been perfectly carried out and although that it has merely driven foresters to exploit forests in Laos and Myanmar, it does seem to be a step in the right direction - and I, for one, do not think that the current effort will be a matter of mere words.

the espoused culture and culture in action will always be varied, and in a culture where nobody will cry foul, critisize, or point out the elephant in the room, for loss of face, i can see how even in the 19th cent it was the same old, same old

I think that in the 19th century it was not so much a matter of people not crying foul or criticizing (it was a century of several armed rebellions against the state that lasted for a decade or more and took the lives of tens of millions) - nor was it then a matter of loss of face, as I doubt that the central or local state was terribly aware of the problem - and at any rate the Qing were pretty busy just trying to keep the lid on things, suppress the massive local rebellions and foreign 'semi-imperialism, semi-colonialism' against their waning power. So I don't think whatever we are seeing today is a matter of the same old same old - but of course you're right about the difference between espoused culture and culture in action.

There was a great guest article in NY Times about 3 years back, a Chinese author went to look for the lotus pond where she used to play in the childhood.

Im sure without linking the story here, anyone can use some imagination to figure out the storyline of the ballad in minor. Thats the 20th Century by the way. Of course, if you have been drinking boiled city water for more than 10 years, it will require some extra effort.

No, sorry about that, it was rude. Alien is right deforestation started long ago, and even on French Mekong expedition you see illustrations over moon lighting up Yunnan surrounding, while in the Laos forest you didnt even see sunlight in daytime. But trying to whitewash the recent pollution with 19th C deforestation is a bit, say, tricky.

Don't mean to whitewash, the situation is terrible - just meant to point out that banning forestry was under the PRC, and that the extreme air pollution of cities, which has gotten worse since 1980, has also finally got Chinese authorities to take it seriously and do something about the environment - no, maybe not enough etc., but they've really begun to see the light. Hope they'll see more light, but of course in a globally competitive 'development' economy and competitive international political system they're not suddenly going to shut down all the coal mines etc., any more than other governments endanger their economic positions. Brings into question question about 'development' generally, as well as the wonders of competitive (naturally) capitalism and national 'strength', especially when many of the elements of such lie in the hands of folks with competitive make-money short-term interests. The light that the state has begun to see is in fact in contradiction to the demands of the kind of world economy and polity that is virtually universal. Question is, will longer-term interests prevail over the structural constraints built into the kind of world we live in, or won't they? And no, I'm not real optimistic, but there's no alternative, and it's not just a matter of the present leadership, who are, after all, not blind.

Sorry A, not going pretend an open debate. Its cool anyway, you can tone down the edges a bit, like a compressor.