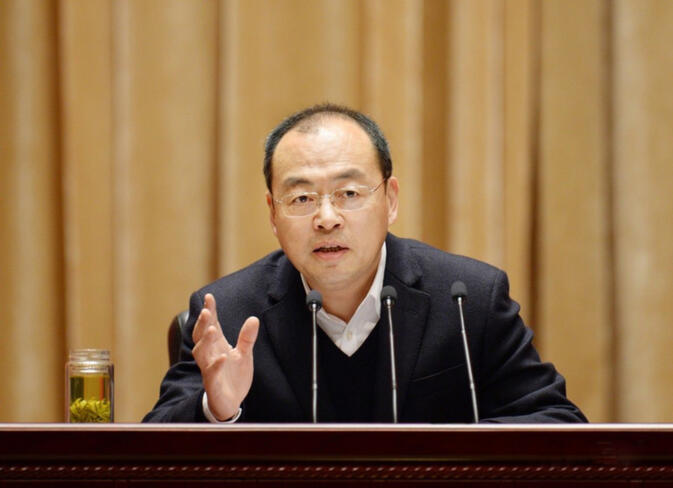 Ruan Chengfa (阮成发) was appointed acting governor of Yunnan province on Tuesday, December 13. His predecessor, Chen Hao (陈豪), who was previously granted the position at the end of August, will continue serving as provincial Party secretary. The appointment comes after a long and rapid succession of top bosses in Yunnan province. Ruan was previously Mayor of Wuhan, the sprawling capital of central China's Hubei Province, and is the first Yunnan governor in recent years who has not held prior governmental positions in the province.

A native of Wuhan, Ruan joined the Communist Party in 1982 and held several leading positions in the city's government from 1989 onwards, serving as Party secretary from 1995 to 1998, and mayor from 2008 to 2016. He has a master's degree in economic management from Wuhan University, and the city's economy grew significantly during his various tenures. It now enjoys the eighth highest gross domestic product of all Chinese metropolises.

As governor, Ruan will be responsible for liaising with Yunnan's various administrative subdivisions and will report to Party Secretary Chen, who remains the highest authority in Yunnan. Together, the two will direct the province's budgetary and political course. This will be particularly important because Beijing aims to make Kunming into the commercial hub of Southeast Asia, as part of its Belt and Road initiative.

In spite of considerable efforts and serious financial outlays by the government, Kunming's transformation process has been slow-going. Yunnan, along with several southwest China provinces and regions, has received massive amounts of infrastructure development aid from Beijing. Shanghai Securities News reported that Yunnan had the third largest growth in infrastructure investment — nearly 20 percent — of any province or region in China. However, it remains relatively isolated from the rest of the country and underdeveloped considering its vast agriculture and mineral resources.

Ruan and Chen will in fact deal with a variety of international and domestic issues as well, such as the illegal trafficking of narcotics, animals and natural resources, the restructuring of Yunnan's booming tourism economy and the province's environmental conservation and sustainable development efforts.

The numerous provincial leaders preceding Ruan and Chen's ascensions in only the past five years include former Party secretary Qiu He (仇和), who was supplanted by Qin Guangrong (秦光荣) in 2011 and subsequently charged with corruption. Qin — known for implementing an enormous Yangtze River diversion project — was in turn replaced in 2014 for no discernible reason by subordinate Li Jiheng (李纪恒), who then experienced a similarly vague fall from grace in August 2016.

Let's hope he can get rid of some of the indolent inertia specialists that seem to be a cause for a chronic lack of progress in Yunnan. Even impoverished Guizhou seems to have outpaced Yunnan's rate of development in recent years.

I hope there is a change, much is controlled by few uneducated gangsters.

Many sector leaders are busier at fighting/blocking competition rather than improving their own customer service.

Gangsters, perhaps, but I'm not sure they're 'uneducated' - anybody know details on the education of such folks?.

Point of the question is that I don't think being 'educated' is proof against gangsterism, nor do I think that being 'uneducated' is a requirement for it.

@Alien: I think we get your pointless point.

Alien has a good point. The 'gangsters' on these borders have been very well educated in the culture of Yunnan. It's not Shanghai

Actually a lot of them don't wear suits