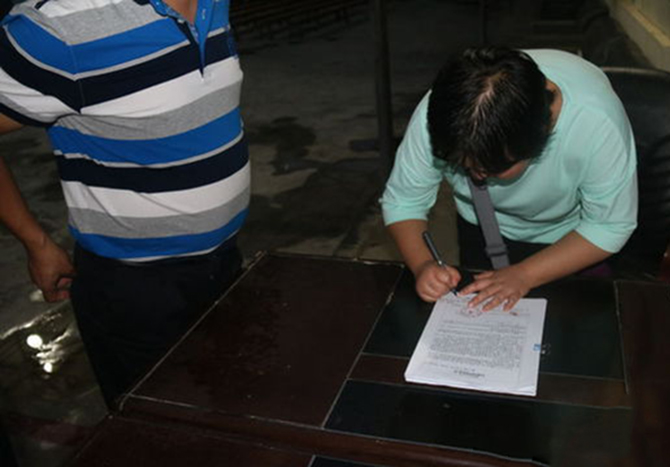 In the most recent incident involving tourists behaving badly in Yunnan, a woman was detained by police in Tengchong after physically assaulting a shop clerk. While reportedly only a minor offense, the case is yet another in a summer with an already long list of people — both domestically and abroad — who have gone to sometimes comical and horrendous lengths after not getting their way.

The August 12 episode in Yunnan involved a 32 year-old woman from Beijing surnamed Lu, who was arrested while shopping for souvenirs in the western part of the province. She was there to buy imported jade, a popular diversion for visitors due to Tengchong's close proximity to the Chinese border with Myanmar.

During a group trip to a jade emporium, Lu, along with others on the same tour, was asked not to film inside the store. When she continued, a guide asked Lu once again to stop taking video with her cell phone, at which point the angered tourist slapped the guide in the face and then bit a store employee who attempted to intervene.

Lu was arrested after mall security and local police officers watched a surveillance video of the incident. Lu admitted guilt and signed a confession during an ensuing investigation, submitting to three days of police detention for her actions. Surprisingly, the slapped tour guide visited the local jail and begged officers to release Lu, arguing that the scuffle was more embarrassing than harmful.

The authorities, however, were unmoved, saying the three-day sentence was the lightest punishment allowed under the law. The police department also issued a statement regarding the case, which read in part, relevant law enforcement personnel must "combat the illegal activities of arrogant tourists while safeguarding the legitimate rights and interests of tour guides and other travelers."

Scuffles such as the one in Tengchong are not uncommon in Yunnan, but many similar offenders have gotten off with far lighter punishments than Lu. The days of leniency may be coming to an end though, as only ten months ago the province became the first in China to establish a police force dedicated to protecting tourists, guide companies and the employees at popular destinations from one another.

At a time when traveling for leisure by Chinese both in and outside of the country has skyrocketed to record levels, domestic and international destinations are feeling the effects. Due to the country's increasingly horrible reputation for producing bad tourists, the Chinese government created a travel blacklist in 2015 called the 'Interim Tourist Uncivilized Behavior Record'. Under the provisions of the law, those whose behavior catches the attention of Beijing can be barred from further travel.

It is doubtful Lu's slaphappy attitude will land her on the blacklist. But Yunnan is in the process of ramping up a province-wide campaign to further exploit what are often referred to as its "plentiful tourism resources", and the government may be in the mood for sending messages to other possible miscreants. Some sort of change is necessary locally and nationally. International news coverage of such events — including this week's story of a Chinese traveler in Kenya stabbing a woman to death over dinner seating arrangements — is giving China a black eye with embarrassment.

f***k you android autocorrect. China blocks Reuters. Link above is for Kenya incident.

The amazing thing is the degrees to which some tourists go in causing trouble over the smallest and most minor things. A commodity -ownership mentality ("I bought my visit to these exotic and weird people and I have a right to do whatever I want to with them").

I do indeed believe in the need to prevent the biting and slapping of tourguides, even though they are major players in the whole commercialized circus, which spreads its tents wherever there are packages to be sold and money to be made.

Not that I defend Chinese tourists that behave badly, but in this particular article they were not the culprits.

^But all part of the same ridiculous system. Why can't these people just rent hotel rooms in their home cities in which to play cards and eat crappy snacks, and then Photoshop themselves standing in front of a bunch of scenic area entrance gates around China and the world to post on their WeChat. It would save a lot of carbon emissions.

I'm old enough to remember when tourists from the United States were reviled worldwide for their boorishness and ignorance. Then it was the turn of the snap happy Japanese. The Chinese will learn how to be "world travelers" like everyone else did. They may even get to like banana pancakes and go rafting and zip lining while out of their brains. Given I live here, I can hardly advise people to stay at home, but it is an option. As a friend once said to me, travel broadens the bum.

this is the classical hungry ghost problem: fulfilll my desires or i ll b violent...