Friction of terrain: Cycling through Zomia (part I) 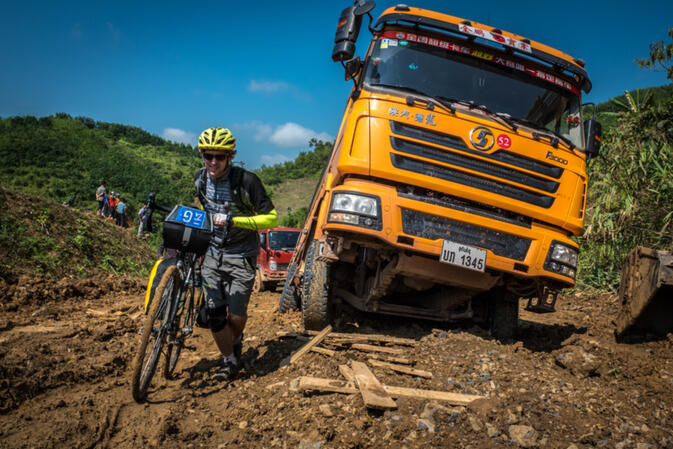 Kyle Hemes pushes his bike past giant Chinese trucks stuck on a steep, muddy back road (photo credit Will Stauffer-Norris)

It was seven thirty in the morning and we were already blanketed with a thin film of fine red dust. Any relief the high altitude provincial capital of Phongsali had given us from the mid-May heat was long gone. Our jet black Trek bicycles, gear piled atop them, were orange and silty as we rolled up, unexpectedly, to the behemoth trucks just outside town. Like heliophobic morlocks, uniformed Chinese hydropower workers squatted underneath the hulking truck undercarriages to avoid the morning rays.

The next twenty kilometers we were about to experience was one of the most harrowing, ghastly stretches of the 1,500 kilometer expedition; a bone-jarring descent from the upland capital down almost 3,000 feet to the bottom of the Nam Ou river valley. Preceded by a grunting diesel pulse, trucks would whip around the corner and the three of us, hands clamped to the brakes on this mountainside screamer, would be suddenly engulfed by a plume. Gritted teeth and spandex could only keep out so much of this ancient river sediment. We were being tossed helplessly in a giant wave — except desiccated, and on the side of a mountain — descending towards one of seven remote dams that will soon completely dissect the Ou River in northern Laos. 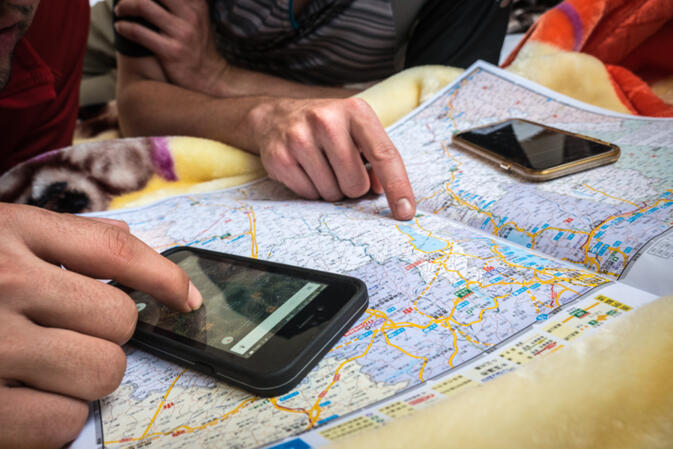 As does any compelling adventure, ours started with some bottles of beer, a squatting housemate, and a bit too much screen time at work. Things were flat and smooth; friction was on our mind. This friction though, was one we had tasted before — and we wanted more. This was the friction of landscapes — a friction that is hard to come by in our normal American existence, where our smartphone prompted SUVs slip across the perfect pavement of multilane highways.

We were after the so-called 'friction of terrain'. Coined as a concept by the Yale scholar James C Scott, friction of terrain describes the encumbrances that separate the uplands from the lowlands. If you have ever tried to claw your way through a bamboo thicket, or trudge up an impossibly steep mountainside, you would know that it's not necessarily the distance that matters, but more importantly, the terrain. The steepness and ruggedness of the mountains and valleys, the quality of the tracks or roads, the complexity of the topography, the ability to pass unhindered by pests and weather. These all add up to a force — for friction is a force — that opposes smoothness, integration, and assimilation. 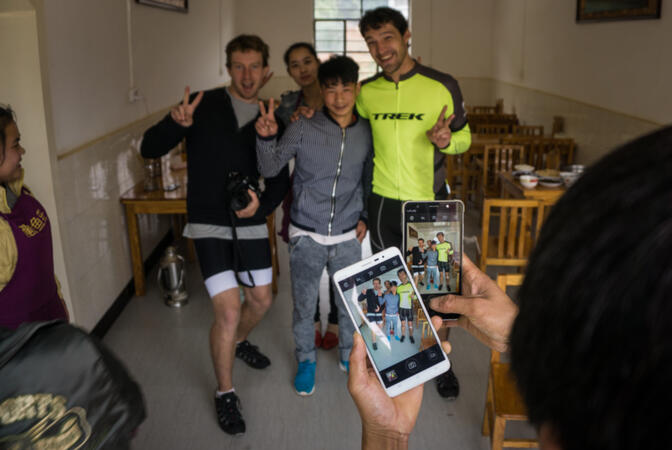 In this age of trans-Pacific trade pacts and multinational organizations, where your consumer product could have travelled across the world a time or two before deteriorating slowly on your shelf, friction is a thing of the past in many places. Where once it took generations, or at least eighty days, it now takes only a few sedated hours to cross the globe. Words and photos, ideas and concepts, these are even less impeded. With a cheap Chinese cell phone and some 3G credit, a Lao farmer in a district capital could know what type of beer I was sipping after work in California, even before my own liver finds out.

Scott talks about our globalized world slowly chipping away at the vernacular, eroding the specialized and unique, in place of the centralized and default. New Pangea, as some ecologists have dubbed our current world, represents disparate places and peoples fused back together. While there are countless benefits to this globalized economy, especially for folks like us, sitting behind air-conditioned screens writing this account, it is worthwhile to consider its consequences. 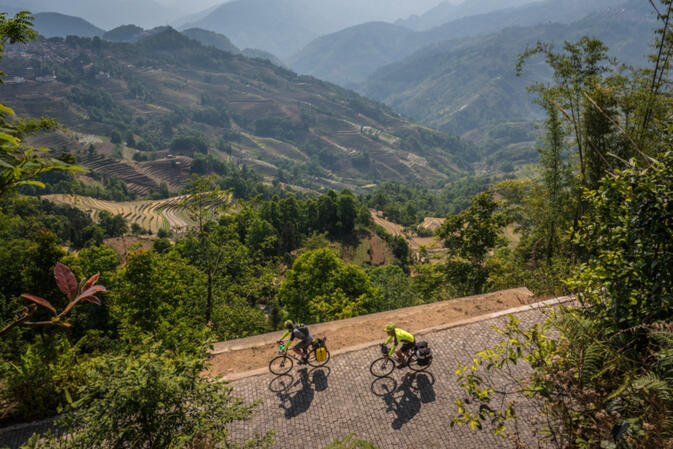 Kyle and Stew cycle through a mosaic of rice terraces and mountains, through the Yuanyang UNESCO World Heritage site (photo credit: Will Stauffer-Norris)

Zomia, a mysterious upland quasi-region populated by isolated and often unassimilated communities, represents a last refuge of the vernacular. It is a disparate clumping of ranges, rather than any traditionally defined administrative jurisdiction. "Few things unite it", says Frank Jacobs of the New York Times, "except its diversity — religious, ethnic, cultural, linguistic...Zomia is a sanctuary, a refuge for isolated, unassimilated communities."

With the help of National Geographic and a few other generous sponsors, we set out to document a patch of these diverse uplands, in the face of development's long, concrete hand. A controversial proposed high speed rail, set to connect Kunming with Laos, became the emblem of this eroding friction of terrain. We would ride the rugged section between southern China's southeast Asia hub and the northern spiritual outpost of Laos, Luang Prabang. By bicycle, we would truly feel the undulations; understand the friction in our lungs and our thighs. 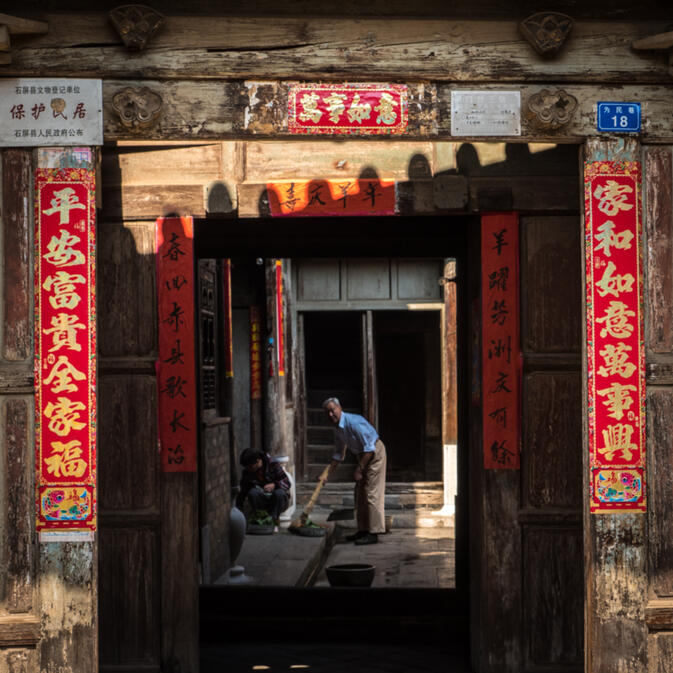 A man sweeps inside the Old City of Shiping, Yunnan province. The quiet, twisting streets of the old city are quite a contrast from the sprawling new development outside (photo credit: Will Stauffer-Norris)

With this high speed rail transect as primary foci, and friction of terrain the guiding theme, our journey blossomed into an upland exploration of a series of connected lines on a map. From an apparition of a high speed rail, to high voltage power line totems lining the dusty track, to a series of seven dams dissecting a Mekong tributary — these lines intersected in complex and profound ways. Splintering off of each line of development, we came to find, are further lines and impacts, connecting various geopolitical actors, local people, and ecosystems into a self perpetuating fractal of influence and change. The set of dams we were descending towards and that hellish, dusty road represented just this — lines on the map.

This article is the first in a five-part series about cycling from Kunming to Luang Prabang by Kyle Seewald Hemes and Will Stauffer Norris. It was originally published on National Geographic Adventure Blog shortly after the authors cycled along or near the route of the proposed Kunming-Singapore Railway.

Doubtless a good trip. There are a lot of foreign bicyclists in Laos. The James C. Scott book is worth a serious read.

Zomia, is an interesting choice of word here. Theres probably some truth in Scotts zomia concept while it has got a lot of criticism too. Chinese scholars have said its impossible to implement the zomia concept on China. Anyway, its probably best applied over Burma.

In the late 60's I was able to see a bit of Scott's Zomia. Travel by foot, humping tools of war and being sneaky gives one a great appreciation for the peoples of Zomia.

I bought Scott's book to try to understand how the mountain people came to be and why they would tolerate us but not the lowlanders that often wished to exterminate them.

Sadly, I only read part of the book and it didn't make back to the US with me.

In about 1965, in the central highlands of Vietnam, my weekly copies of Newsweek and Time weekly magazines caught up with me. I sat outside reading when a Mike Force leader, a Rhade man, stopped and asked if he could read the magazines. Thinking he would enjoy the pictures, I handed him a couple of issues.

I was surprised to see him actually reading English. Soon he explained the French missionaries sent him to university in France. The American missionaries sent him to Lehigh University where he got a Masters in Civil Engineering. I naively asked if he couldn't help his people more as a engineer, but, no, he assured me, the best way to help the Rhade was by killing Vietnamese, Communist or not. In this, his rep was very high.

I can buy into Scott'd thesis that the mountain folk just didn't to share space with lowlanders. We found support and help which in the end seemed to be motivated by "the enemy of my enemy is my friend."

Scott's central theses - that centralized states are about dominating populations, that taxing rice farmers is a good way to do it, and that a lot of people could probably see through the trick and therefore ran to the hills to plant potatoes or whatever - make sense to me, in Myanmar or elsewhere.

Haven't read the book. Does he offer compelling evidence of the thesis? I guess a more traditional view is that groups end up in the highlands either because when they arrive lowlands already have established populations using all available land or they get pushed out of lowland areas due to resource competition?

Roughly, yes. He offers a very good argument for his thesis, but I don't think he'd insist that it represents the only historical socio-cultural process that has been in operation.
The idea: stay in place and grow rice and be taxed, or run for it. Different strokes.