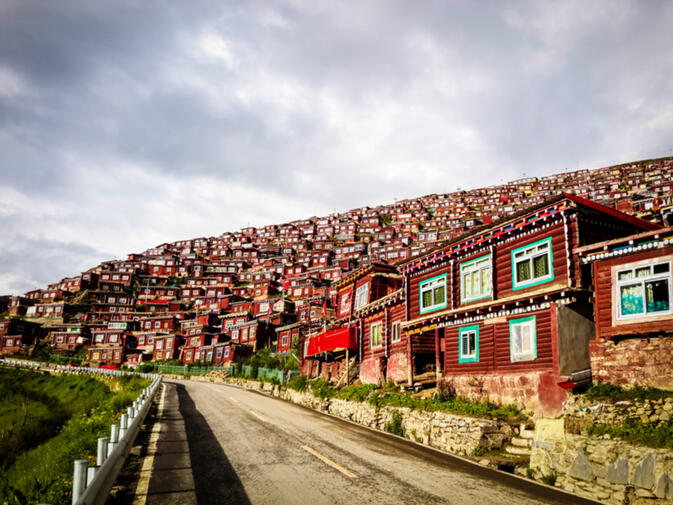 The Larung Gar Buddhist Academy (喇荣五明佛学院) was founded in 1980 by Jigme Phuntsok (晋美彭措), a Tibetan Buddhist lama from western Sichuan. He began his career by traveling widely and collecting rare and obscure Buddhist texts in India, Tibet and other parts of China. Eventually he settled again near his birthplace, and at the age of 47 started the academy, now commonly referred to as Seda (色达). 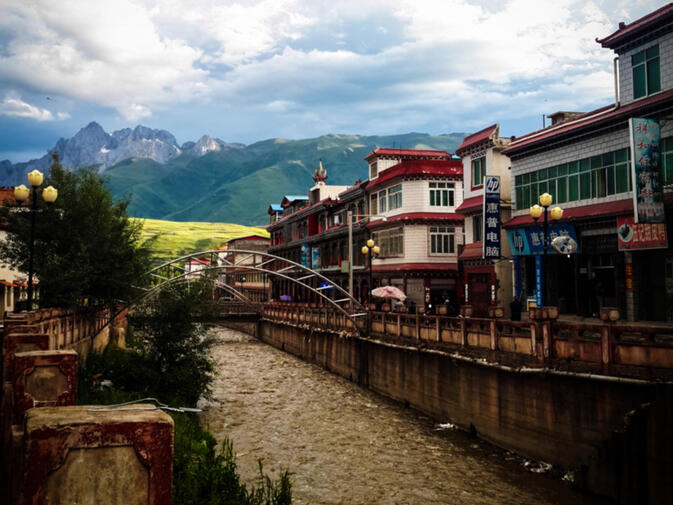 On the way to the complex, most travelers pass through Ganzi (甘孜), Kangding (康定) and the tiny village of Tagong (塔公). They all provide spectacular hiking over endless hills covered in stupas and prayer flags. Tagong is also home to one of the most important monasteries in the area, the eponymous Tagong Temple. 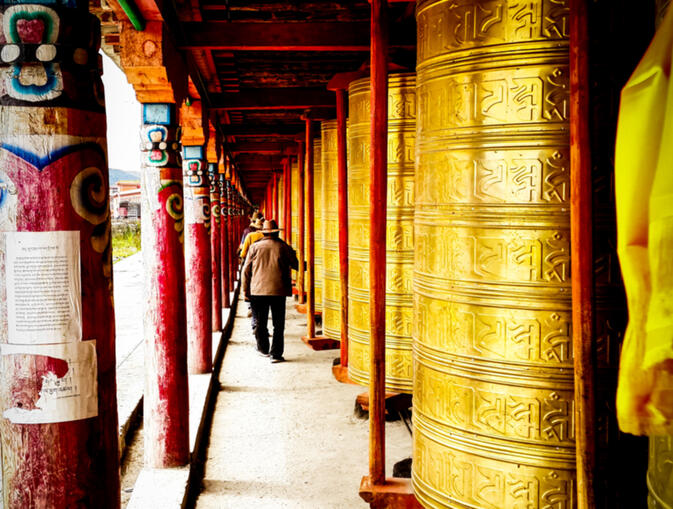 Although the centers of these towns are a bit run of the mill, when getting out into the countryside, travelers are rewarded with routinely stunning views. 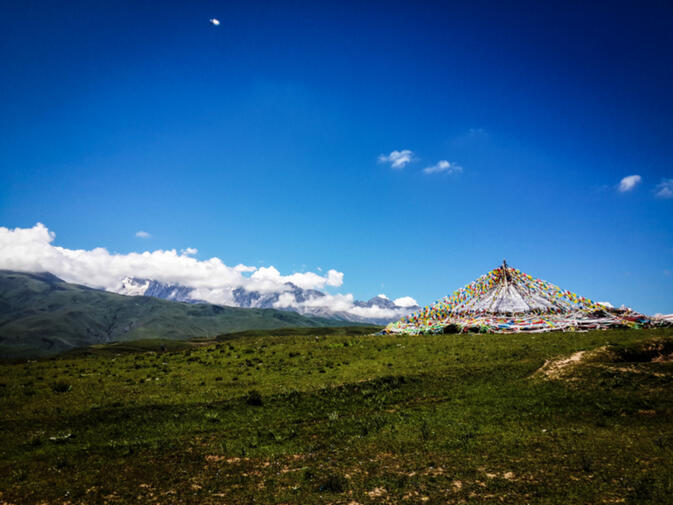 Walking through the high alpine meadows can be a solitary affair, but when hikers do run into locals, they are invariably invited for a few rounds of yak butter tea. 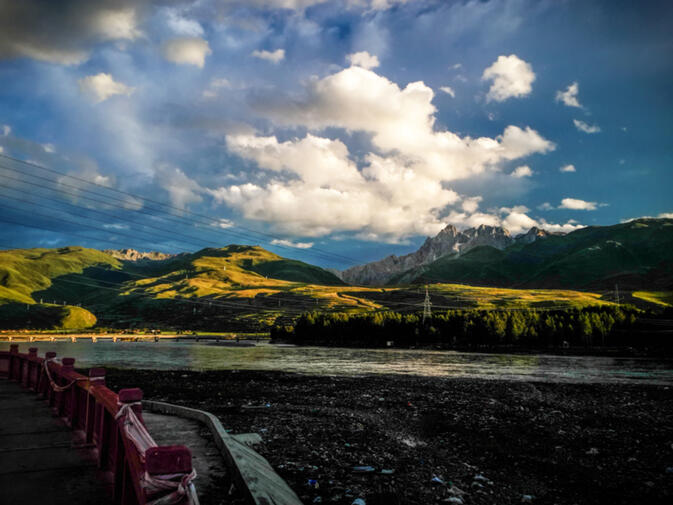 The road out of Tagong continues north for hours, through brilliant scenery and spectacular mountains. Upon reaching Seda, the academy's buildings provide a brilliant contrast to the natural surroundings. 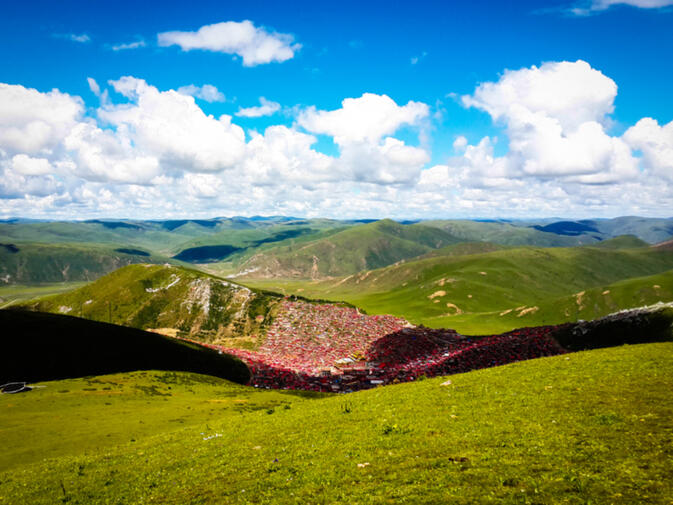 Quite literally nestled amongst the slopes of the Larung Valley more than 500 kilometers — and upwards of a four-day trip — northwest of Chengdu, the academy has, over time, grown to fill entire hillsides with picturesque red buildings. 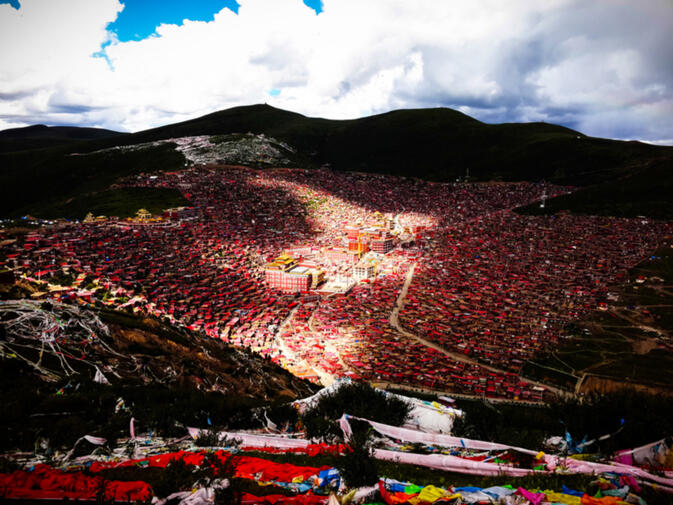 Long-term novices, initiates, monks and nuns alike are expected to build their own homes. While many of the quarters appear to be nothing more than crude shacks, others, no less humble on the outside, are lavishly decorated and lovingly maintained inside. 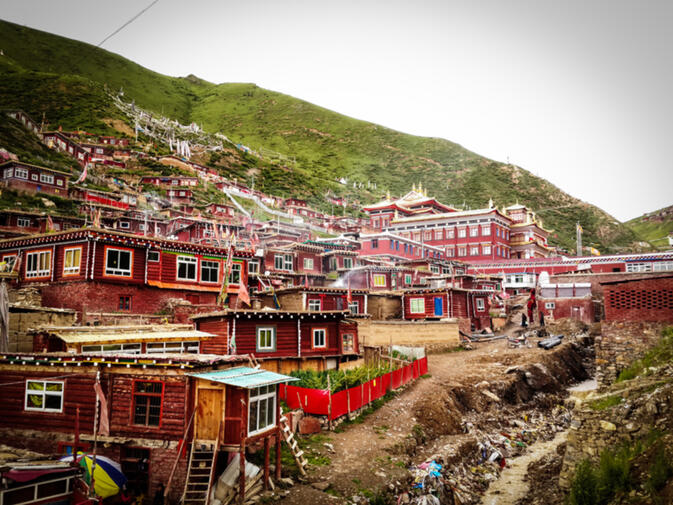 Over time, the complex grew to house more than 10,000 people, their homes festooned around a central temple. Alleyways are tight, often offering barely enough room to allow two people to pass one another. The walk up to the top from the one-street village below is quite a hike in itself. Luckily you can often jump on the back of the little three-wheeled trucks scooting up and down the hill with supplies. No charge here, service with a smile. 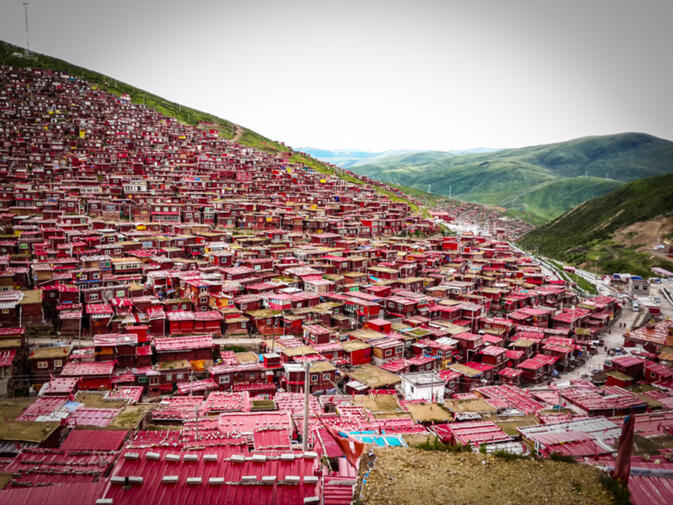 From Chengdu head west to either Kangding or Danba, both of which have changed considerably in the last few years to accommodate the ever-increasing flow of domestic tourists. Along the way, don't hesitate to linger in Danba, as the countryside is full of ancient Tibetan watchtowers and worth the trip. 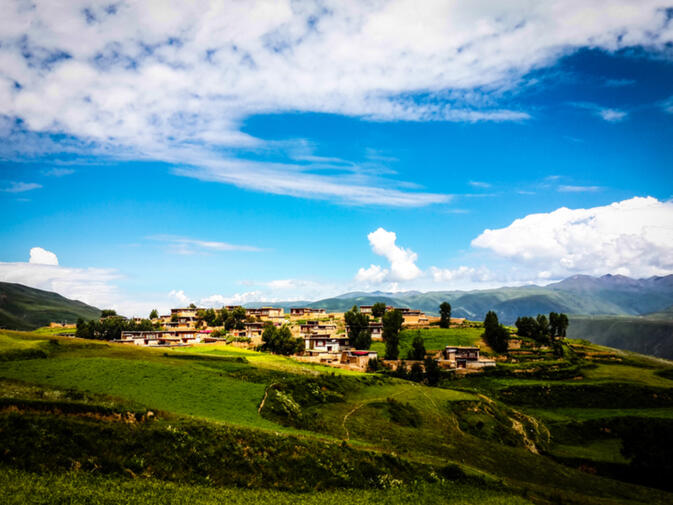 From either Kangding or Danba move on to the charming village of Tagong and stop for a cup of yak butter tea and the best night sky you've seen in a while. Here you can get on a Ganzi-bound minibus to Luhuo. There is public transportation up to Seda, but buses leave only when full and are excruciatingly slow. The best mode of transportation in the whole area is hitchhiking. Make sure to find a ride with locals who can handle the challenging roads. A pretty and clean four-by-four with a city-trained driver will take you nowhere slowly. There is one extremely simple guesthouse on top of the hill in Larung gar, with no private rooms and very basic shared bathrooms. However, the view and the constant chanting make it all worthwhile. There's also a guesthouse in the tiny village down the valley, where you can find non-vegetarian fare and a beer if you are lucky. In addition to contributing to GoKunming, jack of all trades Jan Hassmann bakes bread and pizzas on Sundays at DT Bar, anchors several local bands on guitar, produces and masters music and, in his spare time, teaches English literature. If you have a photographs or a story idea you would like to share, don't hesitate to get in touch through the GoKunming contact form. The last photo is The Best! Good job Jan.

Great article but interesting that there is no mention that this wonderful place is about to be drastically reduced in size. If you want to see it as shown then GO NOW! The government is about to demolish loads of it and reduce the numbers of monks and laypeople by a huge amount. Unfortunately can't give you a link that doesn't require a VPN.

@Hotwater the first link in the article leads to a news report about the demolition, but as this is extremely sensitive, we thought it best to be subtle. Maybe too much so.

@ Scally. First link in article wouldn't open for me. If I was too blunt/unsubtle with my post please feel free to remove it and my link. I'll understand

Another video on Larung Gar and Tibetan Buddhism showing lives and rituals of nuns and monks. As a Theravada Buddhist I find the several Tibetan Buddhism sects uninteresting philosophically but was curious enough to visit several sites in Sichuan in 2007. I planned a summer in Sichuan for 2008 with Larrung Gar on my list but the May earthquake was enough a burden on the local people without another idiot tourist wandering around.
.
www.youtube.com/watch?v=UY0v3QejaWU

Thanks everyone!
As of Wednesday, demolition is underway.. :(

How could the article have been published on June 24 if the first comment was made 'about a month ago'?
Anyway, great photos, Jan.

Hmmm - sorry, seems this is July...what happened in June, anyway?

Devastating to see how much culture and history is being destroyed here. Sad.