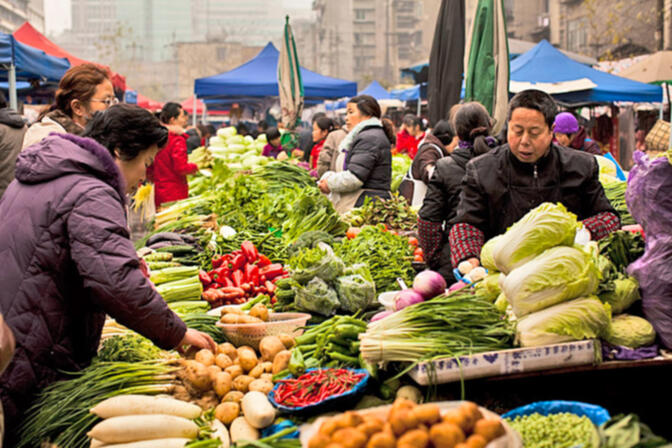 If you are suffering a bit of sticker shock when buying produce or shopping for pork, it is not your imagination. Food prices across China are skyrocketing and Kunming, while a bit insulated from a drastically fluctuating market because of its proximity to farmland, is no exception. Prices for fresh vegetables and pork in the Spring City rose a somewhat staggering 21 percent last month.

Data released by the National Bureau of Statistics (国家统计局) reveals that Kunming and Yunnan are following a national trend, and March was the second consecutive month where consumer produce costs rose by more than 15 percent. It could be worse however, as the cost of buying vegetables grew an average of 35 percent nationally compared with the same time last year.

The rise in vegetable prices has been blamed largely on an unusually cold winter across China's southern provinces. As for pork, which is more expensive now than it has been at any time in the past five years, a Ministry of Agriculture (农业部) official told China Daily:

The pork price rise is due to a shortage in the supply of domestically produced pork caused, in part, by water pollution control initiatives in [ten] provinces. The initiatives that started in November 2015 resulted in the closure of pig farms and the loss of capacity to raise 20 million hogs.

Although fresh food prices are expected to drop as summer approaches, a few varieties may not recover for some time. Garlic, for example, has tripled and even quadrupled in price at local markets after early season crops in Dali were especially hard-hit during a January cold snap. For the time being, shoppers around China will have to deal with inflated food prices, with Kunming and Yunnan residents taking small solace in the fact that they are paying slightly less than people in other parts of the country.

Tough economic times has trickled down to the bottom.

I remember buying a 1元 big bowl of noodles in early 2012.

These days you can maybe get some small/cheap bowls for 7元 if you are lucky. Big bowls with anything in them are closer to 20元.

Similarly, veggies used to be always under 10元 per plate. These days it's not uncommon for veggie dishes to top 20元 per plate.

However, the RMB has, despite dropping recently, grown overall against foreign currency, so the real cost in global terms has risen even further, perhaps 15x and 6x. Yes, there has been inflation, but that happens everywhere and not 15x in 15 years, ie. 100% per year!

using noodles is perhaps better than pork or rice as indicators as these are part of the shopping basket used to mearure inflation. there is possib ly moe active price control on these items

Rice is also part of the shopping basket, isn't it? I'd be amazed if it wasn't.

"However, the RMB has, despite dropping recently, grown overall against foreign currency, so the real cost in global terms has risen even further, perhaps 15x and 6x. Yes, there has been inflation, but that happens everywhere and not 15x in 15 years, ie. 100% per year!"

That doesn't sound right. If you're consuming domestically, you can't state that food prices have actually risen a multiple of the actual inflation because of a difference of RMB vs foreign currency. At least that's not a good indication of economic situations.

This only holds true in the eyes of the few who shop in Yunnan using foreign currency (I guess importers are feeling it).

Inflation in China always seems to be officially lower than what we see in the market. The main reason is the GDP, the main statistic watched and talked about, includes an adjustment for inflation. The greater inflation the more GDP is reduced.

The NBS is thought to play with the GDP deflator to massage the official GDP. This is done by adjusting the market basket and varying the weighting of components. This one of the less transparent parts of the GDP guess.

The market basket DOES include rice, doesn't it?

As well as (wheat) noodles?