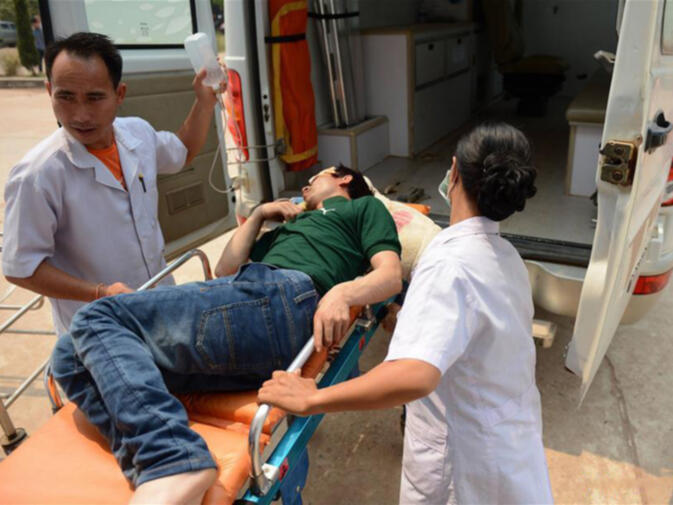 A passenger bus filled largely with Chinese tourists was attacked by a gunman on Wednesday, March 23, in northern Laos. Several people were injured, including at least one of the vehicle's three on-duty drivers. No fatalities have been confirmed, and the suspect, thought to be a lone shooter, remains at large.

The assault was carried out at 9pm local time in the vicinity of Kasi, a town in Vientiane province roughly 150 kilometers north of the country's capital. Conflicting media reports claim the Lao driver either was wounded but managed to drive the bus to safety, or alternately was killed in the gunfire.

It is also unclear exactly how many Chinese nationals were on the bus at the time of the shooting, although reports agree it was at least 25 people. Six passengers were injured in the attack, two of them seriously. Lao emergency responders, according to a source quoted by South China Morning Post, "have transferred all of the injured to a nearby hospital and some of them have been taken to other, better hospitals according to their wounds."

The bus was on its way from Kunming to the Lao capital of Vientiane when the shooting occurred. The region where the attack took place has seen sporadic violence in 2016, first in January when two Chinese citizens where killed by a bomb explosion, and again in March when "unidentified militant gunmen" opened fire on a Chinese-operated logging camp, killing one and wounding three.

However, neither Lao authorities nor officials in Beijing have claimed the bus assault this week was specifically targeting mainland tourists. Addressing reporters regarding the shooting, Chinese Foreign Ministry spokeswoman Hua Chunying characterized the attack as random, saying:

You asked why Chinese citizens are targeted. It is my opinion that there is a risk for people from any country to be targeted when traveling abroad. Attackers do not ask for nationality when they attack. Therefore we call on all countries to make tangible and effective moves and enhance international cooperation on law enforcement to uphold peace and stability of all countries.

The bus shooting comes as international tourism in Laos is skyrocketing. Much of the growth is fueled by Chinese travelers booking group tours to the landlocked country, although road trips by private car owners from the Middle Kingdom have also become extremely popular. In addition to the inflow of vacationers, the Chinese government is in the process of offering Laos enormous infrastructure loans for railroads, dams and other, sometimes controversial, development projects.

Sad that innocent Chinese pay the ultimate price for government policy of buying influence in Asia.

How do you know the reason for the attack? You weren't roaming the streets of Kasi with a gun on Wednesday were you?

My guess: Locals are pissed off at China for economically dominating their country. This involves both Thai Chinese (the economically dominant force within Thai society) and mainland Chinese. Mainland Chinese are the largest tourist group in Laos. In Northern Laos, Chinese RMB is accepted widely and the Laos Kip is relegated to very local and low-value transactions such as locally grown vegetables. Locals watch rows of Chinese drive shiny new cars through their country while they toil for enough money to send their children to school and buy them a cell phone or motorbike. Promises of wealth led to widespread deforestation in the north for Chinese-sponsored rubber plantations, but the market is down so far the locals are left without the forest that used to provide for them or a replacement income. With weapons readily available, it was only a matter of time until things boiled over.

There have been recent skirmishes with the Hmong and Lao government too. Not only about locals, its more complex than that. But true, Northern Laos is becoming a large rubber tree plantation area.

Voltaire's guess is a good one. Note that few Chinese get shot and few Lao shoot at them. I'm not advocating gunfire, but most poor are used to being poor, and I don't think this is good - but individuals losing their cool and blasting away is unlikely to solve anything.

Let's blame the Cia and "the strategic pivot towards Asia."