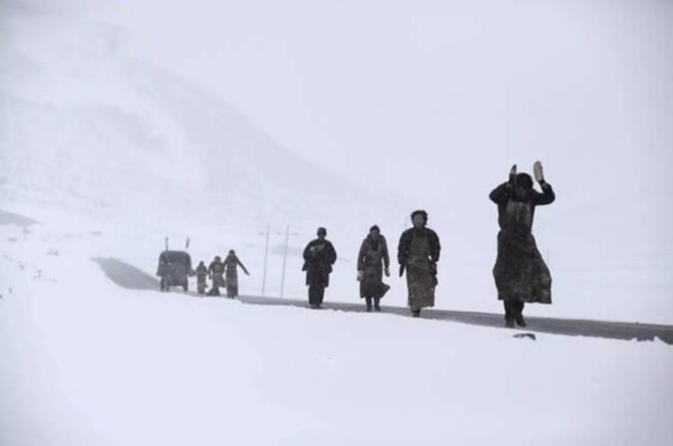 Pilgrimage — some do it for redemption, some for escape, and others for their parents. Yet many more for the blessing of all living things. — Behind the scenes DVD comments from film Paths Of The Soul

In 1991, when director Zhang Yang (张样) — known for films Shower and Getting Home — was still in university, he went on a three-month hitchhike from Gansu to Tibet, facing feelings of loneliness, depending on trucks to pick him up and encountering tons of pilgrims on their way to Lhasa during his journey. In an interview regarding his 2015 film Paths Of The Soul (冈仁波齐), he refers to that experience as one of the key motivations for filming the docudrama. For the director, the film developed into as much of a meditation on finding oneself as an artist as it was about a pilgrimage. Zhang explained he came to understand the art of film direction again — shooting everything like it was the first time.

Feelings of freedom, purpose and of sacrificing oneself for patience and discipline on a seemingly never-ending journey are what Zhang wanted the viewer to confront while watching the film. To experience the loneliness of a single traveler and be able to see how that loneliness can transform into self-discovery — to one asking "Where do I want to go from here? What is it I want to do with my life?" — questions that can often only be answered when one is truly alone with oneself.

With a rating of 7.8 on Douban, the low-budget film Paths Of The Soul has grossed about 40 million yuan (US$5.88 million) since it hit the cinemas in in late June 2017. This is nearly three times its production costs despite the film being show in less than two percent of the theaters in China. 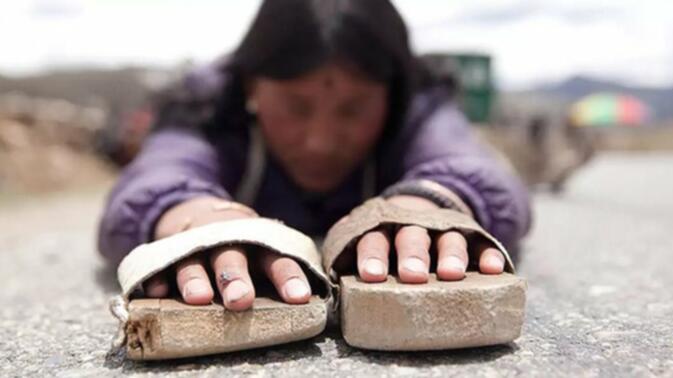 The film follows a group of Tibetans on their 2,500-kilometer pilgrimage along National Highway 318 from their hometown in Markam County (芒康县) to the holy capital of Lhasa. Being more documentary than fiction, the film eschews soundtrack and voice-over and instead focuses upon the few single sounds that various natural landscapes, a road and a small group of humans can create together. The lines between storytelling and documentary seem to blur more than once during the movie, as the director accompanied his group of amateur actors for a about year, filming their spiritual devotion as well as their social interactions as family members who care deeply for one another.

Due to the death of his father, Nyima is reminded of his family's lifelong wish to go on a pilgrimage to the sacred Mount Kailash (冈仁波齐峰). Never being able to leave his hometown, his father died without fulfilling this goal. Being the head of his family, Nyima proposes taking his 72-year old uncle Yang with him on the pilgrimage, with the goal of release him from his fear of dying and breaking the chain of cause and effect determined by his life decisions. Eventually a group of eleven people forms, not least because they all seem to have personal reasons for undertaking the seemingly impossible journey.

The characters rang from a pregnant young woman named Tsring, a nine year-old girl Gyatso and a man wanting to release his family from bad karma. Two young men desiring to honor the deaths of two other people who helped them build a house, the village's local butcher wishing to cleanse his soul from all the blood he shed during his years of work and a drunk needing to free himself from his own self-destruction also join in the journey.

The pilgrims wear thick aprons made of yak hide, and wooden planks tied to their palms. Every few feet they 'kowtow', meaning they raise their hands high above their head in respect for Buddha, then lower their hands, clapping them three times as they touch their heads and their chests before they dive with their whole bodies to the ground, touching the earth or pavement with their foreheads. This is repeated throughout all the days of their travel, regardless of whether the street is dusty and dirty, icy and covered in snow or just one large puddle of water. It signifies a religious practice as well as a symbolic move to express one's deep dedication and piety to Buddha and the holy mountains. 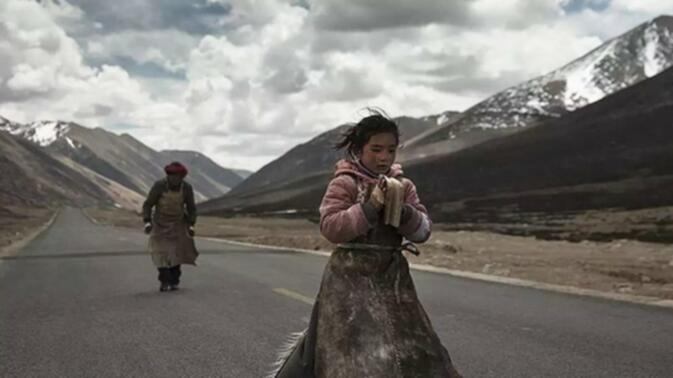 Deeply convinced that their commitment will wash away all of their sins, cure their physical pain and answer their wishes and blessings, the group encounters different hardships along the way — in on instance, their tractor gets hit and demolished by a car on the road, leaving them to pull the supply wagon by sheer manpower. Continuing their path it becomes clear how much strength, compassion and optimism they also give each other, holding their family together through extraordinarily rough circumstances through a barren landscape. As the New York Times put it:

...they and other [pilgrims] don't bring Western-style narrative intrigue to the journey. Instead, we see a united and good-humored community pulling together under increasingly extraordinary circumstances, including childbirth.

Without a script and only a rough idea for the characters, director Zhang limited the camera perspective to mostly full-body shots, showing the endless vastness of the Tibetan landscape in the background. Fairly rarely he indulges in a closeup for a portrayal of joy or pain reflected on an character's features. The film lacks a general soundtrack, save the simple mantra everyone sings every evening when they gather around their portable stove.

Spiritual discipline and faith are the driving forces for the cast's unbreakable devotion, and they refuse to back down as, about 100 kilometers from their destination of Lhasa, run out of money and have to turn to general labor to reach Mount Kailash. Not long after a sudden death freezes the group, forcing everyone to slow down their personal searches. The death is simultaneously the opposing pole to the birth of the child and a nod to the natural circle of life. 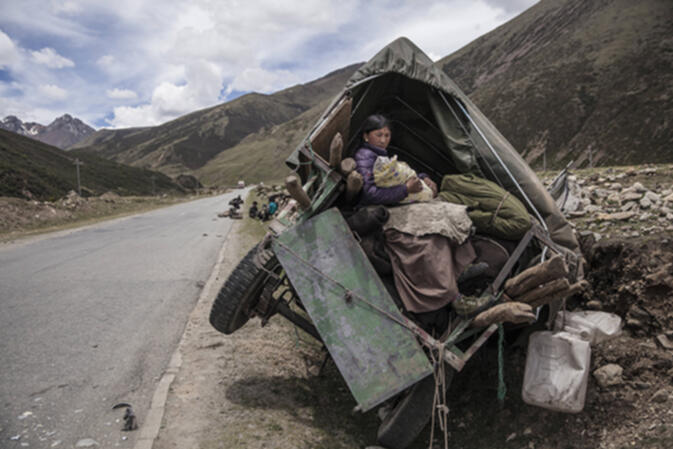 As of this writing, the film has garnered a large number of positive responses from viewers as they praise the director's ability to reflect the contrast between finding meaning in faith and nature versus the modern materialist lifestyles of most Chinese citizens. Yet also, critical voices among international as well as Tibetan and Chinese viewers are emerging online.

One self-described Tibetan on Zhihu criticized the film for over-romanticizing the poverty-stricken life that many Tibetan families endure, arguing that such people often spend their money on Buddhist spirituality and going on pilgrimages even though it brings no progress to their actual situations. "Many people have romantic and idealized feelings about this [Tibet] and its religion amid their fast-paced urban lives, which have been reinforced by the movie," another viewer writes. "On the other hand, many are questioning and attacking the faith. Both may be because of a lack of understanding."

Still, Zhang rejects the idea that his film is a political statement. "I'm not trying to enlighten the audience. I'm only trying to share," he told website Global Times. However, Zhang's intention to film what he saw in front of his eyes eventually developed into the creation now seen on the big screen. As the Yin Hong, a professor at Tsinghua University in Beijing put it, "Whether people praise it or attack it, [the] movie provides a good opportunity for people to think about faith."

Zhang Yang acting more as a companion rather than a director certainly influenced the film's atmosphere in many ways, but that is not the only characteristic that makes Paths Of The Soul so unique. Exploring the individual's desperate attempt to free himself from the sins committed in the past, or the hurt of loss that drives the pilgrims through their long journey, all of these emotions come together in the film, carried through the camera lens as the audience follows a group on their path to spiritual cleansing. These are the main reasons why the film leaves such a lasting impression on its viewers. 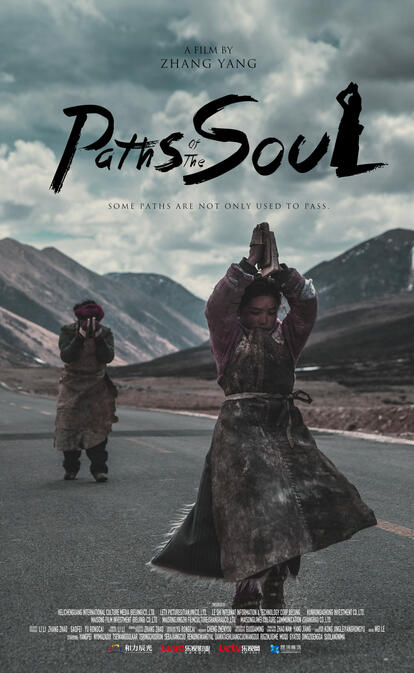 Compare with the widespread modern idea that good living is merely a matter of being continually entertained.

I'd choose the pilgrimage over having to watch this film a second time.

Actually quite enjoyable when watched at 8 times normal speed