The Yi minority Torch Festival is a tradition dating back hundreds of years. However, in many places it has grown into a major tourist draw, and once small aspects of the celebration have become immensely popular. This is especially true of bullfights, which were traditionally held in small clearings and meadows near Chuxiong (楚雄), as well as in several rural counties north of Kunming. 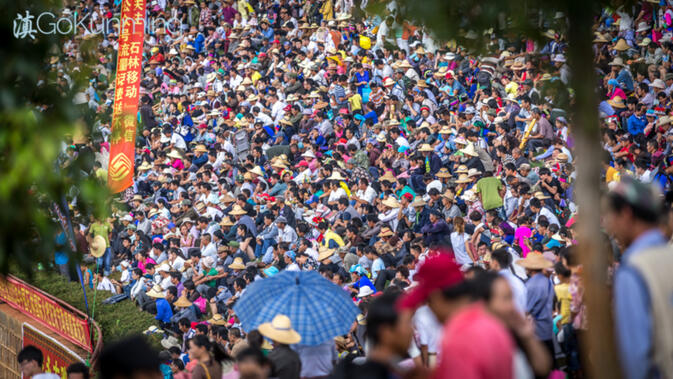 Bulls were brought in from nearby villages and the fights were held, basically, to establish bragging rights for the next year. Today, the tradition lives on, but on an entirely different level. Bullfighting has become big business. Purpose-built grounds have sprung up around the Stone Forest (石林), and it is no longer villages that provide the participants, but individual families. 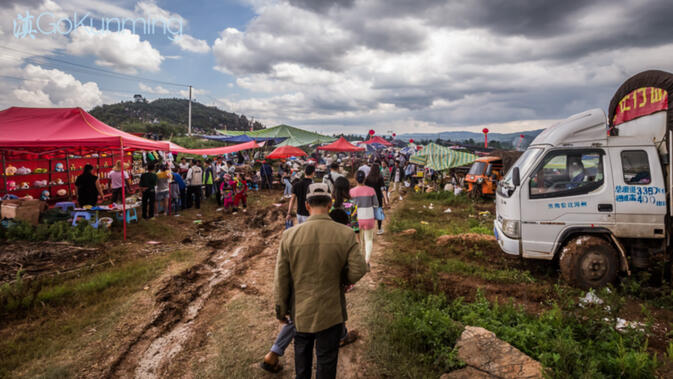 The setting is usually on the outskirts of a town or village, and spectators drive in from kilometers away for a day of feasting, socializing and collective gawking. 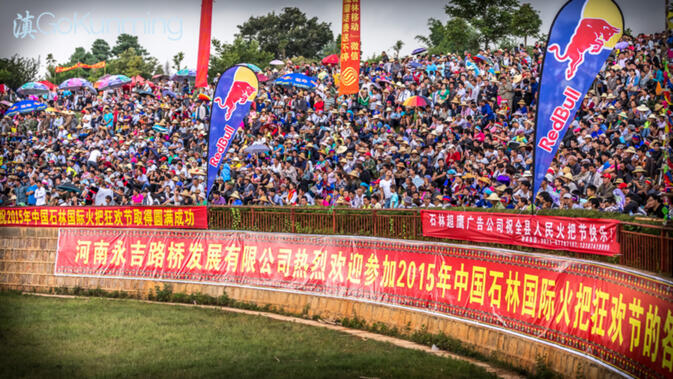 Corporate sponsors have fueled this expansion, with Red Bull being one of the most well-known. The publicity has certainly swelled crowd numbers, with tens of thousands of tourists now outnumbering Yi participants. 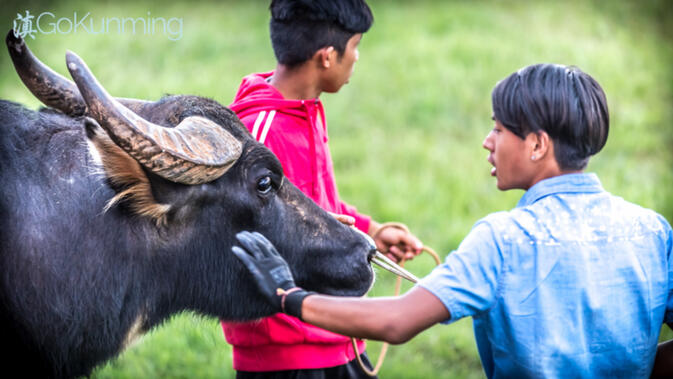 Bulls are paraded onto the field by their handlers, usually led by the nose. Besides ropes that seem extremely thin for the assigned use, trainers come armed with long bamboo canes used to cajole their respective beasts into position. Sharpened horns are apparently legal, and some wranglers quickly file points just before the competition begins. 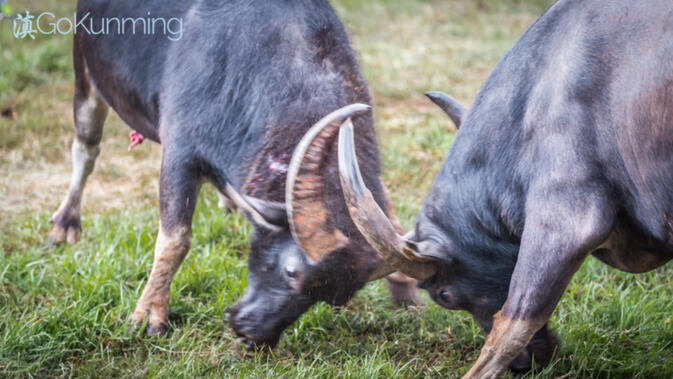 Despite such modifications, the massive animals rarely inflict major injuries on one another. The essence of Yi bullfighting is not bloodsport, and instead focuses on brute strength and which combatant can overwhelm his opponent. 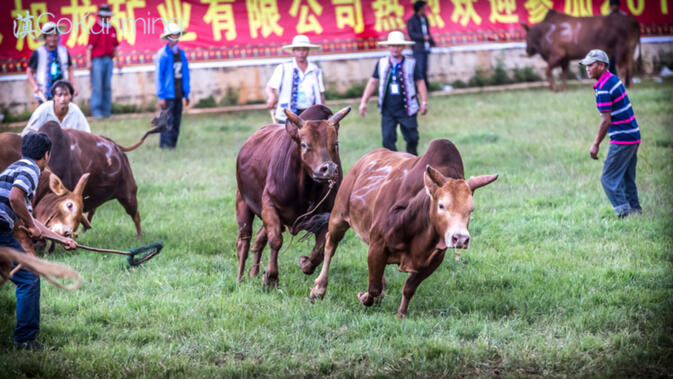 Minor cuts, and one assumes, pretty pronounced bruises, come with the territory. When one bull has had enough, he turns tail and runs, thus ending the fight...as long as the gathered wranglers can calm the bulls down enough. Despite the influx of tourism and government oversight, bullfights still offer a chance for locals to don their best outfits, turn out in style and enjoy the festivities. Individual matches are held throughout the afternoon, and include both water buffalo and domesticated cattle, although the two breeds are not, as yet, pitted against one another. As public interest has grown, so too have the facilities and number of entrants at a given venue. Near the Stone Forest, in the town of Changhu (长湖村), multiple fights were held simultaneously within a single ring, making for a sometimes confused spectacle. 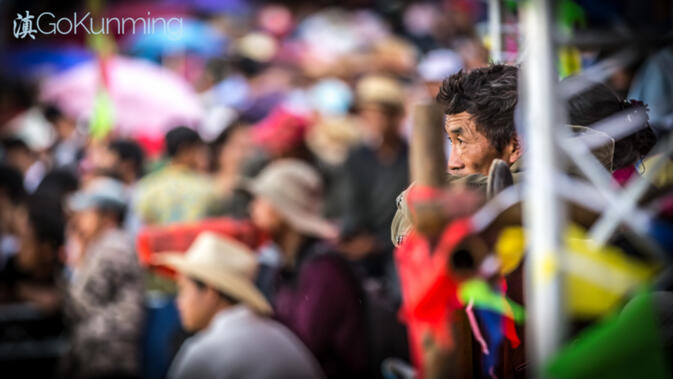 Crowds swelled throughout the day with many onlookers mesmerized by the performances. Huge collisions or completely dominant displays predictably receive loud ovations. However, it is the moments of pure chaos, when one bull simply will not relent and handlers are shown to be largely powerless, that the crowd truly becomes boisterous. 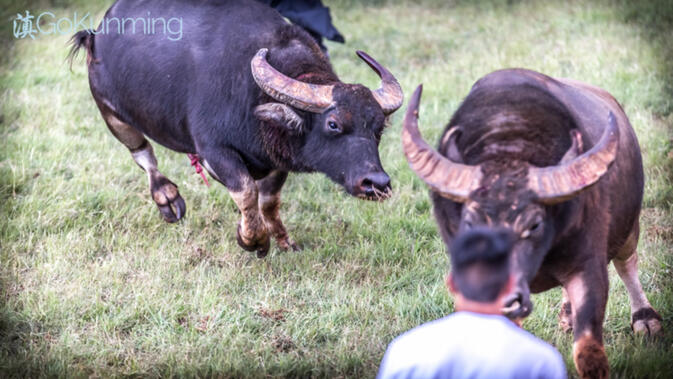 The fights conclude in the early evening, usually around dusk, when people's attention turns from bullfighting to a different kind of entertainment. 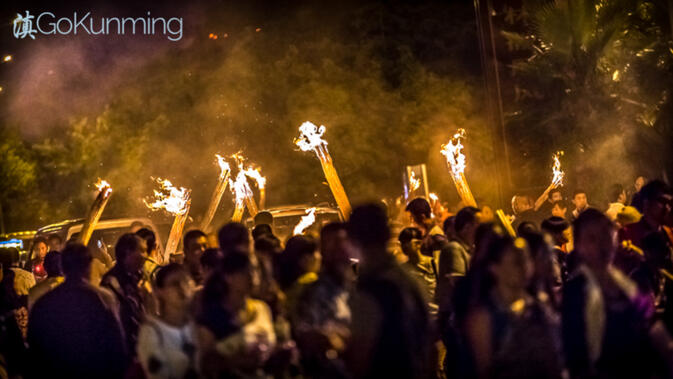 Festival-goers return to town, where traditional dance and song performances get underway, accompanied by ubiquitous torchlight. According to Yi legend, the sky god and earth god once fought a tremendous battle. Only with the help of Yi people armed with pinewood torches could the enraged sky god be forced back to his dominion. 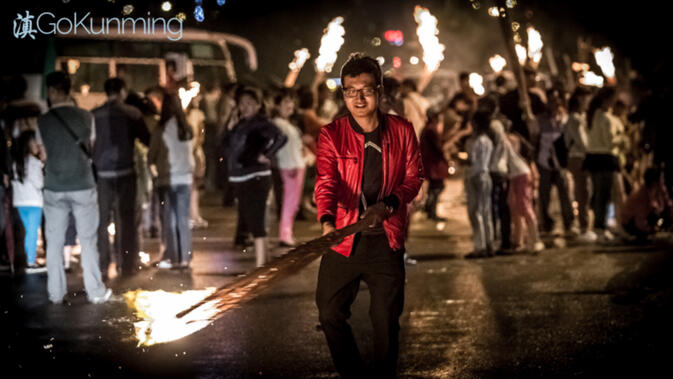 Today, participant motivation is a bit less heroic — the simple human obsession of playing with fire, which for one night at least, is officially sanctioned and encouraged. 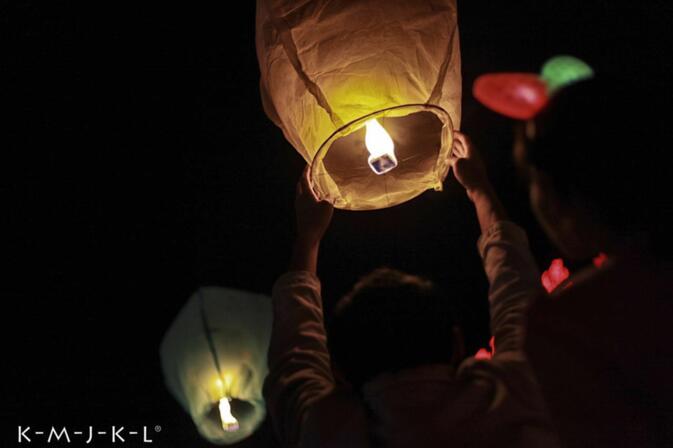 A new tradition, perhaps imported from the beaches of Thailand, has become part of the nighttime ritual. Buying and then releasing candle-powered flying lanterns, often with a wish attached, marks an end to the evening's revelry. 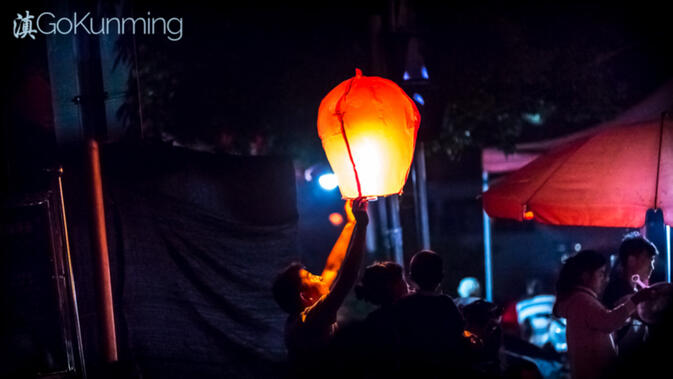 Yes, great photos. I particularly like the short history lesson that went with each photo to explain it.

Flying lanterns (孔明灯) certainly aren't Thai, they're very much Chinese. They were mentioned in Ming books and where in Brought to Britain from Hong Kong in the 1920's, but what? They were imported from Thailand now?
I remember seeing an exhibition about them at Hubei museum many a year ago.

Anyways, is this bullfighting just for the festival or is there certain days of the week I can visit and catch a bull fight?