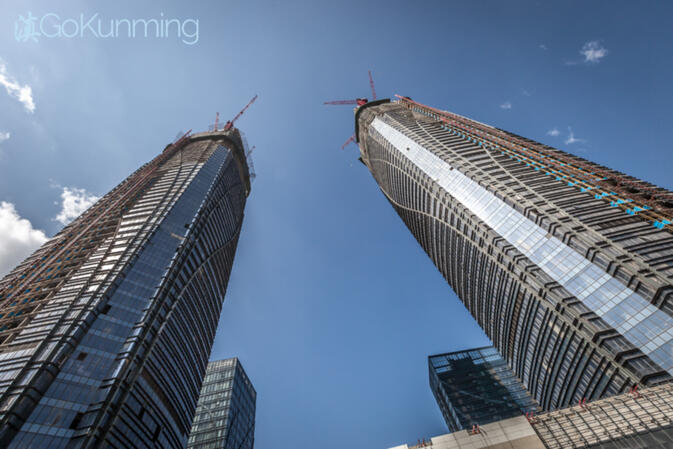 It's difficult to name Kunming's most iconic architectural feature. While Shanghai has several enormous structures that fit the bill, and Beijing as well, the Spring City detonated one of its most beloved landmarks two years ago. It has arguably yet to erect any reasonable replacement, save for perhaps 219 meter-tall Kunming Iron and Steel Building, which at night lights up like some executive's psychedelic fever dream. 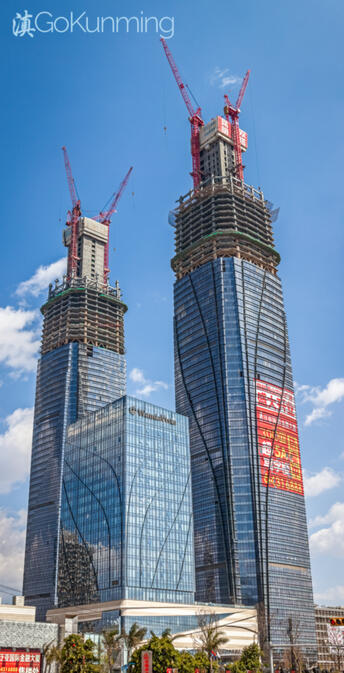 Wanda Group (万达集团), the mega-development conglomerate, is looking to make its mark in the race for Kunming skyscraper supremacy, building two identical structures significantly more lofty than any other in town. When finished — reportedly by the end of this year — the Wanda Plaza Twin Towers (万达广场双塔) will reach heights of 307 meters, making them the tallest buildings of any kind in the province.

Work on the center — more commonly referred to as the Kunming Twin Towers (昆明双塔) — began in September 2013. The buildings will each contain 67 floors, planned to be of mixed commercial, luxury hotel and residential use. The announced price tag for such soaring ambitions is expected to top ten billion yuan (US$1.65 billion).

Enormous shopping malls at the base of each tower opened for business on October 31, 2014, marking Wanda's one hundredth 'plaza' in China. As the commercial area opened, Wanda held simultaneous celebrations at its 99 other facilities, attracting millions of people. The opening ceremony in Kunming was highlighted by a 'musical fountain' — a design feature now ubiquitous, if seldom actually used, across China.

Even before the plaza's glitzy opening, the construction site hosted a somewhat unorthodox publicity stunt. A tightrope walker from Xinjiang walked between the two towers via a two-centimeter cable. He used no safety equipment except for a balancing pole, was blind-folded during the crossing and, for some reason, balanced a plastic bottle full of juice atop his head. 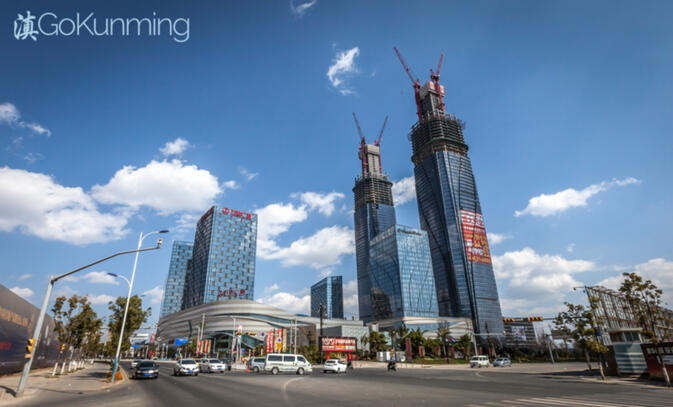 Both towers feature slightly curved and twisting façades, said to be inspired by the petals of Kunming's official flower, the camellia. The Kunming Twin Towers are located at 688 Qianxing Lu (前兴路), and the middle and upper floors will command excellent views of the Panlong River to the east. 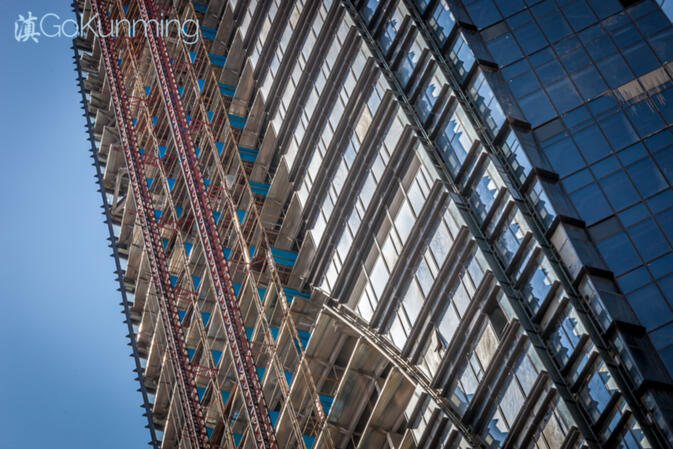 Tightrope walkers and Rolls Royce exhibitions may draw crowds, but the title of Kunming's tallest building will be a fleeting one for the towers. Also currently under construction is the Dongfeng Plaza project in downtown Kunming. The immense skyscraper, which, pardon the reference, looks much like Barad-dûr in the Lord of the Rings films, will top out at 456 meters and thus dwarf the Wanda towers. 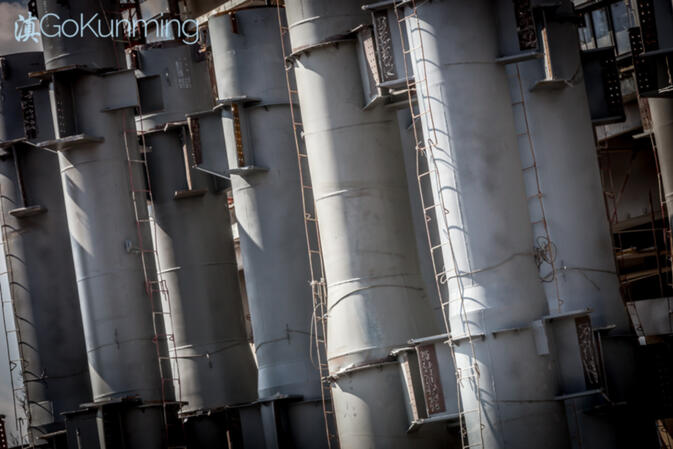 needs a bridge in between :)

who paid for it? Wanda is supposedly an integer development company but it is a little hard to believe.

The Petronas towers were built by tycoons with public money, then sold back to the city, after which the tycoons still occupy the building and are now charging the public to visit it.

* source: Asian Godfathers by Joe Studwell. Bit of a must-read that makes you question any of these gigantic projects.

I went to the construction site of the Wanda Towers in march 2013 to photograph a tiny temple - Tian Zi Miao in what was then called Tan Jia Ying Village. The tiny temple remained as construction proceeded and miraculously it survives to this day or at least until June 2015 when I was there.

I have to give the developers credit for not destroying the tiny temple. Lets hope it remains.

The temple is directly behind the towers near the corner of Qian Xing Road + Lu Yin Ave.

Alexez: I know of the perspective correction function in Lightroom and have used it on many occasions. In the case of these photos I felt leaving the distortion had its charm and looked more interesting than the corrected image. Thanks for the tip though. :)

Yeah, I liked the photos.

MORI TOWER - ROPPONGI HILLS OPEN 2003
In 2004, Tokyo, only a year after officially opening, a small boy's head was crushed in the revolving doors, despite the installation of a sensor system designed to prevent such tragedies. What happened - the building management installed some "safety" barriers, which were causing the sensors to trip - so they reset the sensors - which also had the adverse effect of NOT recognizing small children.

2007 - FOUR YEARS AFTER GRAND OPENING
In the second incident - Otis elevator installed the elevator systems, and regular inspections showed the elevator cables were rusting and fraying in 2005, from rubbing/chaffing against other equipment and fraying, but no actions were taken to correct the issue. Eventually, the frayed cables started sparking (ostensibly as a result of friction with various infrastructure components) and started a fire.

This lead to a nationwide check of over 200k elevator systems in Japan of which about 1,000 (less than 0.5%) were determined to be at risk.

Risks are well controlled, when safety is meticulous, but when management becomes lax...

It will be interesting to see how well these buildings and their tenants survive the next 5-10 years.

Usually, newer buildings are required to employ green tech - LED lighting, waste-water collection, storage, and distribution systems, etc. I didn't notice the green spaces from the photographs - but that doesn't mean they're not there...yet.

Any interest from gokm on the environmental and sustainability features of the upcoming high-rises? Renewable energy? Solar heating and HVAC systems?

Would be nice if labor and capital were put to use creating something that actually helped somebody who badly needed something.

There is no metro stop nearby. Maybe a 45 min walk from FuDe station.

@AlexKMG you are absolutely right. Don't know why I thought that was right. It's been changed in the article. Thanks for catching it.