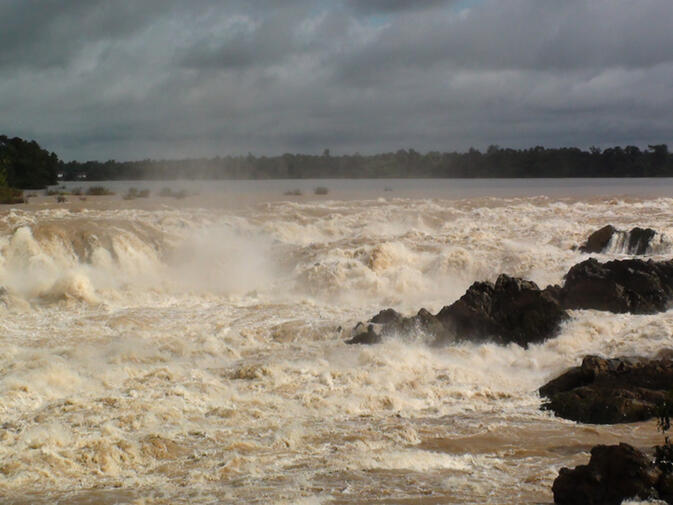 The Mekong River flows through six countries and supports the food needs and livelihoods of well over 70 million people. It does this while also sustaining habitats home to a treasure trove of rare plant and animal species found only in this unique part of the world. But immense hydro-electric projects loom large when considering the river's future, leading to questions of how, and even if, the very different countries through which the Mekong flows can work together to manage the world's twelfth-longest river.

Of particular interest, to those in favor of development and conservationists alike, are two hydro-electric facilities in Laos — the US$3.8 billion Xayaburi Dam in the country's north and the proposed Don Sahong power station near the border with Cambodia. 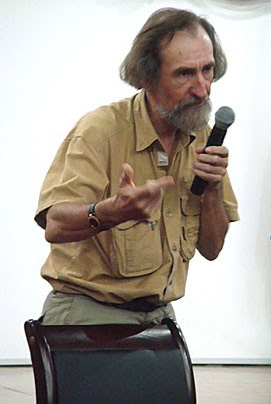 In an effort to better understand the current situation facing the Mekong — both the upper reaches inside China known as the Lancang River (澜沧江), and the lower basin as it winds through Southeast Asia — Green Drinks Kunming, Cultural Diving and GoKunming have organized a film screening. On Sunday, June 7, we will welcome author, journalist and filmmaker Tom Fawthrop as he screens his documentary Great Gamble on the Mekong.

The film focuses on Xayaburi, a 32-meter high dam across the Mekong expected to be finished and producing power in 2019. Upon completion it will create a 49-square kilometer lake and, according to its critics, create far more problems than it solves. Its debated status and success or failure is also something of a test case for the ten other dams planned for the lower Mekong.

Chief amongst the worries surrounding the Xayaburi dam are reduced water and sediment flow downstream, habitat destruction, agricultural loses, dwindling fish stocks and human displacement. Fawthrop's film discusses these concerns — which were voiced strongly enough to delay construction on the dam for several years — through interviews and personal testimonies.

Following a screening of Great Gamble on the Mekong, Fawthrop will discuss his film, its subject matter and his years of covering Mekong damming issues for publications including the Economist and The Guardian. Joining him for a panel discussion of Mekong issues will be Brian Eyler, founder of website East by Southeast (requires proxy) and Brendan Galipeau, a PhD candidate at the University of Hawaii who studies the social impacts of dams.

An open discussion involving everyone in attendance will follow the panel conversation. Host venue Humdinger Brewpub will provide a 20 percent discount on drinks, including all their beers brewed on site. The event begins at 2pm, June 7, and is expected to last about two hours. Entry is free but donations will be accepted to cover the cost of Fawthrop's travel expenses. All are welcome to join us for an enlightening afternoon discussion of these incredibly timely and pressing issues. 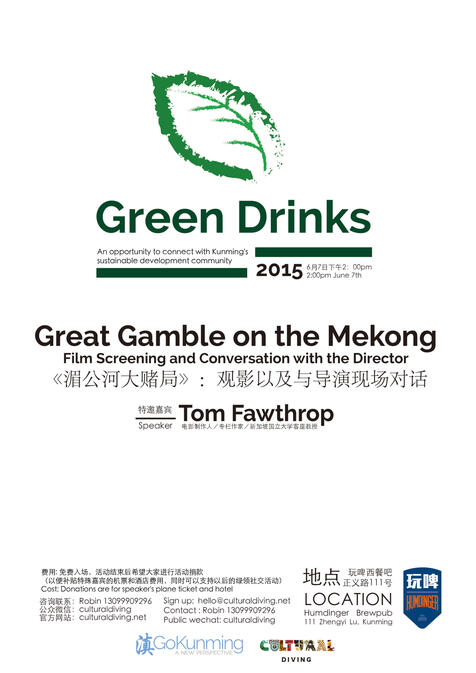 You can pick up just about any stream, city, frog, butterfly or mountain out there, and say its soon game over. Mekong is just one around - She may got some extra symbolic value, but the current is flowing.

The issue Fawthrop will be dealing with is an important one for a very large number of people, and personal contacts lead me to believe that he will do a good job in dealing with it.

FYI - www.eastbysoutheast.com does not require a proxy :)

Broadening the perspective a bit, theres Salween too, and Nam Ou. Just by broadening it "a bit". Theres no single guy dealing with this, no matter how big cowboy-hat hes got, its just about presenting. If he even ever got that near the corridor where any of them decisions were made (which he never will) he would disappear in Laos or be beaten up by a Chinese mob.

I'll be there on time.