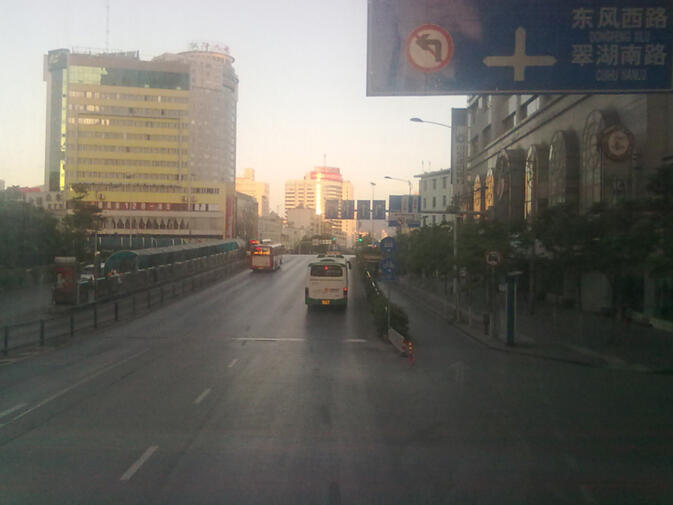 Chinese urban management officers — known as chengguan — have an image problem. This is as true in Kunming as it is for many other major metropolitan areas. But in the Spring City, it appears local law enforcement is trying to do something about it, just not very well.

Yesterday evening, after rush hour traffic had died down, a red banner was unfurled from the turtle-back flyover in Xiaoximen, emblazoned with the slogan "Warmly welcome you to the first ever urban management street party!". Roughly one hundred gathered officers performed a choreographed dance to the popular song Little Apple (小苹果), according to dozens of eyewitness accounts posted on social media.

The surprising performance was part of a new campaign entitled 'The Chengguan: Your Buddies', a community outreach program planned to burnish the tarnished image of Kunming urban management personnel. The goal, according to online documents, is to "harmonize past discord between the people of Kunming and urban management officials in accordance with the relevant rules and regulations according to law".

For the rest of 2015, some 250,000 yuan (US$40,000) has been allocated for similar events. However, if the first effort was any indication, that money should perhaps be put to other uses. Following the initial outburst of music, the enthusiasm of the gathered chengguan officers began to fade. No one from the small assembled group of onlookers crossed into the cordoned off 'party area' to join in the festivities.

According to local media reports, frowns replaced smiles on the faces of many of the uniform-clad officers, but some remained undeterred. "Please, come back! We brought fresh durian and fried squid," cried Yu Renjie (愚人节), a ten-year urban management veteran.

I can't believe this didn't work out. We have tons of plans for flash mob happenings all over town, but maybe we'll have to forget about them. I don't think people understand how hard it is to make friends when you have this job. We're so lonely.

The ill-conceived block party was another misstep by urban management personnel, who perhaps did not see the irony in throwing a party on the exact spot where they were once unceremoniously replaced by potted plants. Highlighting the actions that have made the chengguan so unpopular, a man standing off to the side of the sad little gathering was asked by reporters why he had not joined in. "You see that cart they're eating apples from?" he replied, gesturing toward the officers. "That used to be mine."

Excellent! I almost fell for it. I guess because not many things would surprise me anymore in this country.

Is it bad I clicked the links for turtle-back flyover and Little Apple?

tits! You had me until I read the comments

Nice. That made me blow more air out of my nose than usual.

Poor Yu Renjie though. He lost his job as a government official and became a chengguan in only a year.

You had me, I confess.

"You see that cart they're eating apples from?" he replied, gesturing toward the officers. "That used to be mine."

Have another party - bring a booth and put the chenguan inside - charge 5 yuan per person to throw rubber bricks at them - they can raise millions in a few hours.

Maybe someone should tell HFCAMPO it was an april fools joke.

The article is a joke but the cheng guan problem is real.

There is a place near my house where they store all the trikes and vending carts that the CG confiscate from the poor people just trying to make an honest living.

In China, the horrible chengguan trashes your (toxically-chemically spiced-up) durian, and the homemade wooden stall, and maybe even sell some of the confiscated durians at the black market. Maybe some even get some bribes.

In West...the cops take you in within a minute trying sell red apples on Times Square, and taxman & prosecutor will try to put you in jail. Now try that, with apples painted red with iron-oxide and cyanide - and you are in even deeper shit.

If they take care of the Wenhua Xiang situation I'll be their buddy.

You got me, but for the comments.