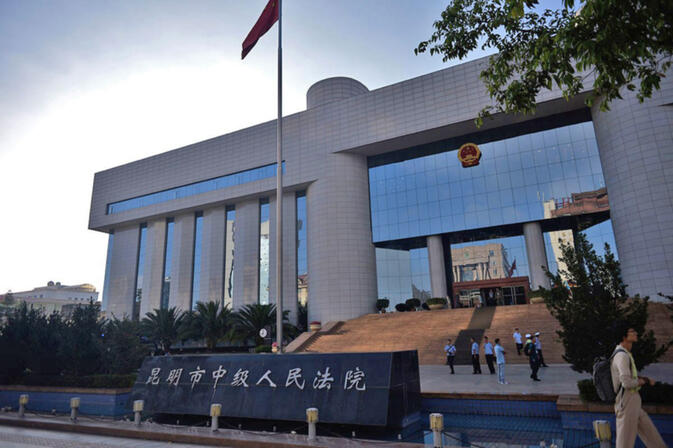 Three men from Xinjiang, all of them convicted of helping to carry out the brutal 2014 Kunming train station attack, were put to death earlier this week. A brief notice posted on a micro-blog managed by the Kunming Intermediate People's Court announced the executions on Tuesday

Iskandar Ehet, Hasayn Muhammad and Turgun Tohtunyaz were convicted of premeditated murder and leading a terrorist group in September 2014. Their guilty verdicts and sentences were recently upheld by China's highest judiciary, the Supreme People's Court, clearing the way for the executions.

The three men did not physically participate in the shocking March 1, 2014 attack in Yunnan's provincial capital. Instead, according to the now-accepted narrative, they were apprehended for illegally trying to cross the border out of China two days before the train station rampage. In a statement made shortly after the attack, then Yunnan Party Secretary, Qin Guangrong, characterized the captured men as Muslim terrorists, adding one had confessed to his crimes and admitted the group wanted "to join jihad".

Parts of this narrative directly contradict previous press accounts claiming the suspects were captured following a 36-hour manhunt in Kunming undertaken by authorities after the train station bloodshed. It remains unclear when or where the men were actually caught, as no details of their arrests have ever been made public.

Alternately dubbed the '3.01 Event' and 'China's 9/11', the March 2014 attack left 31 people dead and 141 injured. Four of the assailants were shot and killed at the scene — in some accounts by a single police sniper in under 15 seconds. The lone female attacker, Patigul Tohti, was apprehended alive at the train station and later sentenced to life in prison at the same trial where Ehet, Muhammad and Tohtunyaz were condemned to die.

Making an already painful and opaque situation even more confusing, investigators who claimed the case was closed in mid-2014, announced last month that four new suspects had been arrested in Indonesia. Another five people thought to have helped orchestrate the Kunming plot reportedly escaped a police dragnet by Indonesian police.

Uncertainty of details aside, this week's handling of the executions was far more subdued than the last time Kunming authorities dealt with a high-profile death sentence. The simple announcement was made on a micro-blogging service and did not mention the means of death or where the executions were carried out.

In stark contrast, Kunming judicial officials made waves both inside and outside China in 2013 for their handling of the execution of Burmese drug kingpin and convicted murderer Naw Kham. Authorities televised his final hours, producing an ill-conceived reality television show — complete with running commentary — that aired nationally. It ran for nearly two hours, ending with a live interview with Naw seconds before he was taken away and killed.

wow...sounds like they needed a lot of planning and personnel in the maticulous planning of a terrorist masterplan, such as killing random people at a busy trainstation with knives and machetes.

i just saw a newsfeed where 10 thugs attacked and smashed a preschool on beijing lu. and they were very cautious of not killing anyone...the point is they seemed to have planned their attacks much more carefull with a tenth of manpower.

i wouldn't be surprised if the executed culprits are bloggers or rights activists or just normal blokes having commited the crime of offending an influencial person or VIP.

confessing after a few weeks in chinese jail. isn.t proof enough for me.

i guess we will hear and see of more dilenquents related to the horrible march events, in the future. since there will never be access to the trial, it's a free ticket of killing whoever they want. making all westers secret organizations look like incompetent posers in terms of killing people they don.t like.

the sad thing is that by killing and jailing everyone not compliant with their political view or being of another religion or minority. they make the victims and their families complicit.

I have my doubts about them being religious extremists. Uighur Islam is generally moderate. Many Uighurs drink alcohol, some of them even eat pork. What is clear is that they despise the Chinese for not allowing them passports, invading their lands, and erasing their culture. Uighur children have to do their exams in Chinese, a completely foreign language to them, and so unsurprisingly most do terribly. They lack the business contacts in the east to do business in Xinjiang, whilst Han migrants make a fortune. They have no chance in life from the beginning to the end. Perhaps their escape from China failed, they knew they would soon be arrested, so they decided to go down in a hail of bullets rather than quietly. But that wasn't these men; 'The three men did not physically participate' so the guys being executed didn't kill anyone...

Sounds fishy to me - if it's not, why is the state so closed-mouth about the whole thing?

contrast evil burmese drug lord, the devil from outside, big show. to the evil from within,small show. and live realisty tv thing was criticised by all sides from within and without