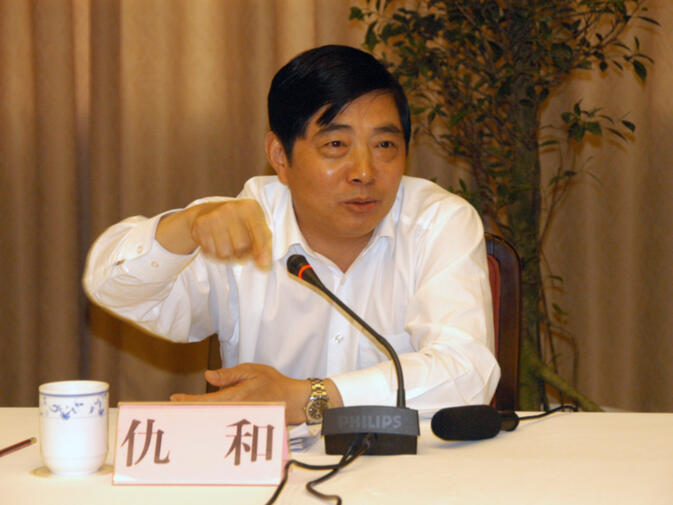 China's crusade against official corruption rolls on, as hundreds of government officials have been unceremoniously yanked from their posts over the preceding two years. But perhaps nowhere has the collateral damage been larger than in Yunnan, where it appears nearly all of the province's highest-ranking cadres from the past generation have been charged with some form of misconduct.

Add to this list Qiu He (仇和), the one-time Party Secretary of Kunming, who just six years ago, was honored in Beijing as a no-nonsense reformer. In a terse, 26-character news article, the Yunnan government announced Qiu stood accused of "serious violations of discipline and of the law". This phrase has unambiguously become synonymous with corruption and graft during the presidency of Xi Jinping.

While working as Kunming's highest ranking party member from 2007 to 2011, Qiu earned a reputation as a tough-minded, if sometimes intractable, bureaucrat. He once fired a fellow official for falling asleep during a meeting and reportedly required co-workers to learn hundreds of phrases in both English and Vietnamese in an effort to improve business relations with neighboring countries.

In addition to his reputation as a heavy-handed boss, Qiu got many things done — at times controversially. He approved the destruction of 18 second ring road overpasses and then ordered the entire length of the expressway be elevated. Construction on the enormous Changshui International Airport began under Qiu's watch, as did work on the city's ambitious subway. In one year, Qiu oversaw the planting of 800,000 trees as part of an urban greening campaign and converted many of the Spring City's major roads into one-way streets in an attempt to alleviate traffic congestion.

For much of this work, he was recognized as one of the country's "outstanding contributors to China's reform" in 2008 — just one year after taking office. He was honored alongside China's first astronaut, the 'Father of Hybrid Rice' and others. At the time, Qiu's future looked intensely bright.

However, after his first four years in office, a promotion was not offered and he was unexpectedly demoted in 2011. Although still a government official in Yunnan, Qiu labored in relative obscurity as one of Yunnan's many deputy party secretaries. He continued in this role until March 15, when, one day after attending meetings of the National People's Congress in Beijing, it was announced he was under investigation.

What the 58 year-old Qiu may end up being best known for — and what may have ultimately led to his undoing — was the demolition of massive swathes of Kunming's 'urban villages' (城中村) in 2008. Many of these older, poorly built neighborhoods occupied large tracts of the city center, and under Qiu's guidance, were cleared to make room for large-scale real estate projects. That some of those construction contracts were then awarded to companies in Qiu's native Jiangsu province is widely rumored to have figured in his political demise.

The Chinese government rarely makes announcements such as the one concerning Qiu without having ample evidence to back up its accusations. While his fate is yet to be decided, Qiu follows a who's who of former Yunnan officials who were dragged down by scandal.

Bai Enpei (白恩培), provincial party secretary from 2001 to 2011, was disgraced last September on charges identical to those leveled against Qiu, while Wen Qingliang (闻清良), former head of the Kunming Railway Bureau, narrowly escaped the death penalty in 2014 following his conviction for accepting bribes.

Before that, vice-governor Chen Peiping (沈培平) was also found guilty of graft and former Kunming Party Secretary Kong Chuizhu (孔垂柱) reportedly committed suicide while in custody and under investigation. Yunnan's highest ranking party official, Qin Guangrong (秦光荣), was removed from office without explanation five months ago, leading to speculation that he would be next in line to face allegations of corruption before Qiu He beat him to it.

This is huge. If a figure like Qiu, who was transplanted from another province to clean up the dirty local political scene, can go down, seems like nobody is safe. Everybody with dirt on them who hasn't gotten busted yet must be getting real nervous at this point.

All these officials getting caught up in corruption and the implication that Xi is using these corruption scandals to get rid of officials in the opposing party - makes me wonder.

Good guys and Bad guys - So who are the good guys?

Xi and his followers or is he getting rid of the good buys?

To me, if you are PRO USA, then you are a Bad Guy.

getting rid of his enemies...

The NWO is always getting rid of its enemies - but the enemies of the NWO are the Good Guys.

Most guys are neither.

so which countries are NOT part of the NWO? Syria? North Korea? Venezuela? ...

Why do these officials not move to that home they bought in Australia/US when some new guy shows up? Greed? Can't give up the easy money? Ego? Don't think they will be the one caught?

People involved in major (and seemingly unnecessary) construction projects often have dirt on their hands.

- Changshui, while certainly a better-looking and more modern airport, has been a headache for pretty much anyone. Wujiaba didn't have nearly as many fog issues and transport to the city centre was convenient. Changshui's metro connection hasn't been finished for years.

- My Chinese colleagues say that everyone knows that tree planting is _the_ preferred way to engage in corruption these days. Something about the fluctuating price and the maintenance costs. I'll ask again tomorrow.

Three massive projects that are expensive, only partially necessary, badly planned and where it's easy to use construction delays and unexpected costs as a smokescreen for a wad of cash here and there.

"The enemy of my enemy is my friend"...and our enemy is government corruption. So regardless of the conspiracy theorists - obliterating corruption, which is apparently rather rampant in Yunnan, is a good thing.

Keep whacking the mole (whack a mole game analogy), until corruption is beaten down to negligible levels as opposed to it's currently pervasive practice.

@laotou: I agree, though it's also important to pay attention to what else comes aboard when you have an anti-corruption drive, and also to the situation which causes corruption to keep popping up - e.g., the ideal is not to have a society in which everybody who breaks the law is in jail, but one that does not produce crime. Probably impossible, but moving in that direction will get you closer to that goal than not doing so.

the longer i live, the more i think that some people are born to be criminals. their brains are hard-wired for it. it's their destiny. and nothing can stop it.

I can personally comment on Qiu He. I can honestly say that when I directly asked him for help to stay in Yunnan, five years ago, his staff directed me to the proper city and provincial government staff persons. I gave no bribes. Paid no one anything. Nor was I asked to give any benefits anyone for anything they helped me with to stay in the province. I have never had to pay any government person to stay here in business.

@Magnifico: Nonsense - crime is simply that which is against the law, and laws are socially created, not genetically defined. You can't be hard-wired to break laws - your genes can't possibly know what the law is.

@laotou. That presumes the replacements chosen by the new guy won't just be more of the same.

have you ever heart about the "murderer's thumb" theory?

In his 1901 manual The Laws of Scientific Hand Reading, William George Benham warns that clubbed thumbs are "dangerous companions...not to be trifled with at any time." He further declares that "[m]any murderers have had clubbed thumbs.... Their brutal instincts being strong, jealousy most often has led them to fits of violent rage, and the terrible qualities of the clubbed thumb have given them passion and determination strong enough to take human life."

Then there were French racist 'scientists' who thought that Algerians' head shapes showed they were likely to become criminals - this after decades of French colonization, discriminatory laws, lack of political rights, etc. When the Algerians made revolution, which rarely is carried out without breaking laws, this was interpreted as proof. See Franz Fanon, The Wretched of the Earth.

ok, i'll try to read about it. could be bs for political agendas.

The man definitely had a political agenda, but that doesn't necessarily make it bs.

My goodness, dont these people realize that by persecuting these public officials they are stealing food from their children's mouths. To think that now their kids must take the Gao Kao and go to universities in China because their father is either in jail or can no longer afford to send his children abroad. How terrible. This must be the work of evil foreigners trying to colonize China.

Don't think for a minute that their money is not hidden. Their assets are well hidden and given to trusted members of the family. No one will suffer. Ha.Ha.

Like taxes, they will only be punished for the money that is found or declared. However, I know someone who is looking at 10 years jail time. Also the correction facilities for government people have a fearsome reputation. Even today.

Hi to everybody. Do you live in China and you are surprised?

We nearly all live in China and I doubt if anyone is surprised.

He's guilty of giving contracts to his friends in Jiangsu? He's practically a saint compared to western politicians if that's his only crime.

It seems like this man almost singlehandedly unfucked Kunming. The first time I was in Kunming was in 2008, and I remember thinking the whole place looked like a giant slum. Now it actually seems livable.

Yeah, but what has this development meant in terms of income distribution, especially that for the corrupt and their victims?