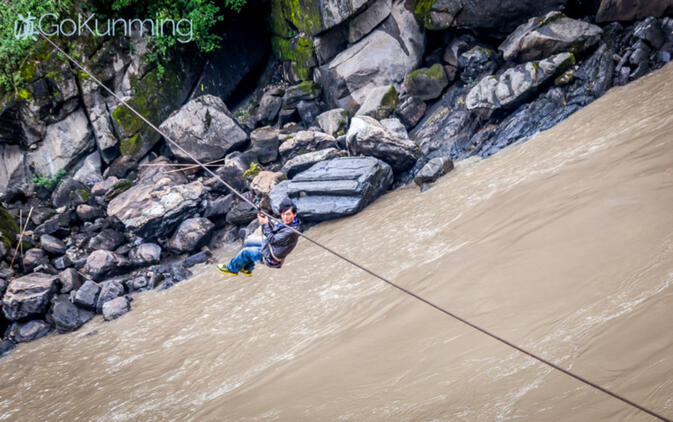 It is not often that far-flung places in Yunnan's rugged northwest make it into speeches by a Chinese premier. But that is exactly what happened earlier this week when Li Keqiang (李克强) mentioned Fugong (福贡) and other little-known mountain communities while discussing national plans aimed at drastically reducing poverty in some of the country's poorest areas.

Giving a speech before the National People's Congress, Li brought up liusuo (溜索), the iconic rope and cable ziplines that once crisscrossed unfordable sections of the Three Parallel Rivers. The Premier was speaking generally about infrastructure projects in China's west and specifically about building bridges and roads to small villages with limited access to highways.

Li told the audience China will allocate funds to construct 145 bridges in Yunnan by the end of this year. Of those, 17 will replace existing ziplines, which Li characterized as "dangerous". Many of the still-in-use liusuo cross the Nujiang River (怒江) at places such as the town of Lama (拉马) near the Stone Moon.

Building bridges, argued Li, will help speed up development in poor areas by allowing commerce, trade and services to flow more easily. As an example, he spoke about the 'flying doctors' of the Nujiang region — physicians whose only access to the sick in some remote villages is via ziplines that are particularly difficult to operate at night. 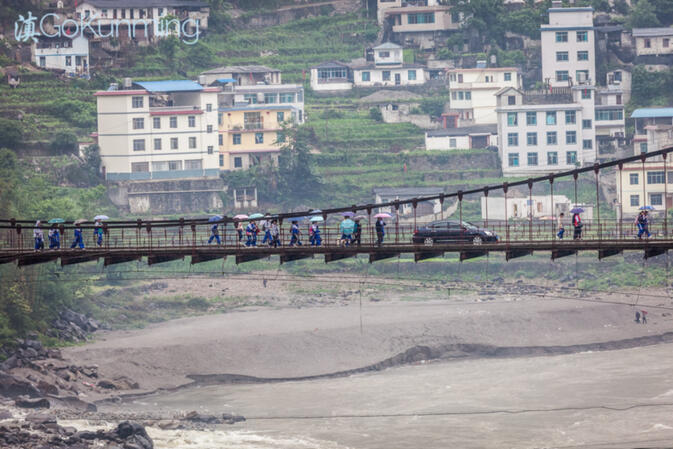 The bridge-building initiative is part of a larger effort to lift 70 million people across China who are, according to news service Xinhua, "still struggling for adequate food and clothing", to higher standards of living by 2020. In his speech, Li said it was imperative to improve the lots of at least ten million poverty-stricken people by the end of 2015.

In distant Yunnan hamlets along the Nujiang where no bridges existed, all types of commodities — everything from bulk foodstuffs to livestock to cinderblocks for new houses — had to be sent in across ziplines. A villager surnamed You told website Want China Times that a newly built bridge to his Yunnan village saved him time and an estimated 20,000 yuan (US$3,200) when he recently built a house in an area once reachable only by liusuo.

The national plan to take down all of Yunnan's ziplines echoes a 2012 edict made by the Yunnan government announcing all but six of the liusuo would face demolition. That initiative was either underfunded or proceeding too slowly for bureaucrats in Beijing, meaning an icon of Yunnan's rugged past may disappear entirely.

One of the outside world's first glimpses of Yunnan's liusuo was provided by botanist, explorer, photographer and ethnographer Joseph Rock. While exploring Yunnan in the 1920s, Rock used the ropeways to ford the Lancang River. His diary account captures the essence of a crossing:

...there was a yell of "Let go!" and off I shot, far into space, at the rate of 20 miles an hour. A glimpse of the roaring river far below me, a smell as of burning wood, caused by the friction of the slider, which raced over the unevenly braided, bumpy rope, and I landed, like a heavy mule, on the rocky west bank of the river. 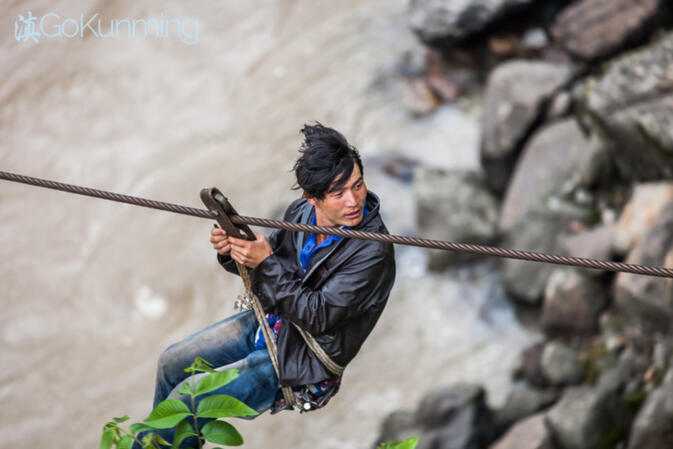 Sounds like an excuse. The west is moving in to Burma big time, China is fighting to stay relevant now that its long term geostrategic play of Burmese dominance and energy transit has been basically burned at the stake.

Sounds like China are going to use the excuse of poverty alleviation to build more roads and dams in the region, sell electricity and plastic trinkets to Burma thus ensnaring them economically, and perhaps try to open the road to Bangladesh or India. Burma, the US and the local state armies (Kachin, Wa, Shan to a lesser extent) don't want this. India already has communist insurgency problems (ala Nepal's recent situation) and that northeast corner of India is where China once waltzed its army in and out to prove a point before India could do anything.

The area is very geostrategically charged. Failing some kind of invasion (unlikely), it will be a long road away from methamphetamine manufacture, clear-felling forests, slave-like mining conditions, and heroin.

All the farmer wants is a concrete house to keep the wind and rats out. All we want to look our beautiful carved wood and straw homes.

The farmer just wants an easy and safe way to cross. We want a thrill and something exotic.

So will these disappear; yes, unless tourism comes and saves these zip lines.

@Alex: tourism & ziplines - tourism probably will do this, make it into just another entertainment - contact Disneyland.

No, I'd rather they just disappear unless the locals want to keep them around.

The locals will likely want to keep them around if there's economic value (e.g., tourism) for doing so.

Sounds like a similar activity I did in South Africa a while back.. Very cool :)

17 will replace existing ziplines, which Li characterized as "dangerous"

@AlexKMG
They've already got tourist ziplines! They're north of Fugong. 10 kuai for a ride.

Most of the ziplines have already been replaced by hundreds of new bridges over the last several years. Nothing new about Li Keqiang's announcement.