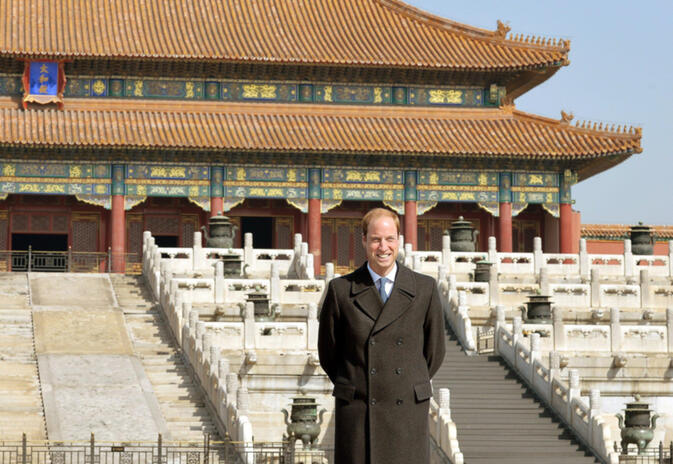 The highest ranking British royal to visit China in 30 years arrived in Beijing on March 3. The Duke of Cambridge, Prince William, second in line to the British throne behind his father Prince Charles, made a brief stop in Beijing before heading to Shanghai for a business conference. The final stop of his four-day visit, somewhat surprisingly, is planned to be Xishuangbanna in Yunnan.

His Royal Highness Prince William Arthur Philip Louis, Duke of Cambridge, Earl of Strathearn, Baron Carrickfergus, Royal Knight Companion of the Most Noble Order of the Garter, Knight of the Most Ancient and Most Noble Order of the Thistle and Personal Aide-de-Camp to Her Majesty The Queen, is in Shanghai primarily to promote trade between China and the United Kingdom. The prince will open and attend the three-day Great Festival of Creativity, billed by organizers at UK Trade and Investment as "a dynamic celebration of creativity in business, and the start of a new dialogue between global enterprises".

Following a tour of the Forbidden City, the two men discussed their mutual interest in international football as well as the prince's involvement in wildlife conservation and international anti-poaching initiatives. The latter issue has been of special concern to the prince for several years. In 2014, Prince William founded the charity United for Wildlife, a consortium of seven wildlife NGOs, with the goal of fighting "the rising and apparently insatiable demand, much of it from Asia" for endangered animals.

Before departing China, Prince William will come to Yunnan to visit the province's cross-border elephant reserve it shares with Laos. Writers in the British media have wondered if the prince would push officials in Beijing to do more regarding the importation, both legal and illegal, of rare animals into China. He has reportedly yet to do so, perhaps because one day before his arrival, China enacted a yearlong ban on the importation of all ivory from Africa.

The prince's stop in Yunnan could be a way for him and Chinese officials to signal a tacit understanding on protecting elephants without actually addressing the issue. Since 2005, Prince William has been a Royal Patron of Tusk, an organization working in Africa promoting community development and environmental education programs.

The elephant preserve in Xishuangbanna was established in 2009. It encompasses 54,700 hectares — 31,000 of which are in China — and was designed to protect the country's last wild elephant herd. Conservation efforts surrounding the reserve have met with mixed results and elephants have sporadically mauled or killed villagers living nearby. In late 2014, the carcass of a bull elephant was discovered inside the park, its tusks apparently removed with a chainsaw.

While protecting wild animals is a nice initiative, that guy points fingers at foreign lands, and yet he and his own family are involved in the casual hunting and slaughter of birds, deer, board and other wild animals and actively support fox shooting.

in certain western countries, at certain times, in certain regions and under certain conditions, hunting is a good thing. It keeps populations of e.g. fox under control. It's also the only viable excuse Americans still have for owning a gun (but not an assault rifle).

Not the best representative for the UK lol

Americans hunt Americans, thus we need assault rifles. They're semiautomatic anyways, meaning you can only kill a couple of hundred humans in an hour or maybe two or three elephants, though those are harder to find, so shooting Americans is easier.

Are you saying that it's difficult to distinguish between elephants and Americans in a crowded area?

I have nothing against shooting foxes. It is a far more humane form of pest control that hunting with dogs, or poisoning.

Elephants and Americans: shoot at the one making most noise.

not the best representative redjon, but not the worst either

Positive comment: Good on him. I hope he can make a difference. :-) It's a shame the wild elephant population is dwindling in China, and I hope something can be done. I'm glad there's a park to protect them.

I thought I'd read that Xishuangbanna is the only native elephant land where populations are actually growing, due to China's protection measures - not true anymore?

True, but they are taking everyone else's. Perhaps a new spin on nimbyism.

Don't understand 'taking everyone else's' or nimbyism, maybe something I don't know about?

Taking everyone else's ivory, but protecting ones own.
NIMBY Not In My Back Yard.

@bluppfisk. Pretty sure South African elephant populations grow too. They have to cull them every so often.

what a title! royal highness, duke, earl, knight, baron. good gig if you can get it.

Good gig but comes with a lot of responsibility, and as heir he has to mostly keep his opinions to himself. Limited freedom of speech. There are also a lot of royal engagements.

Now Fuerdi, that is a good gig. And there is no shortage of them.

@Yankee, they don't shoot foxes anymore. That practice has been banned since 2005.

As far as I am aware, shooting foxes was never banned.

In 2005 following severe pressure from animal rights campaigners fox hunting was made illegal in England and Wales by the creation of the Hunting Act 2005.

I think it now depends on the number of dogs that are accompanying you. But shooting foxes is still not banned.

Is it still allowed on Boxing Day?

His own family still seems to have their ivory, skins and horns collection on display in their country house:

i love animals. especially their heads.

The Hunting Act 2004 is nothing to do with hunting with guns.
It is about hunting mammals with dogs. Hunting with dogs means that the dogs chase the hunted animal until either it escapes, or the pack of dogs catches it and kills it. If you have ever seen pack animals kill prey, you will understand why the law was passed.

The law has nothing to do with protecting foxes. Foxes, rabbits, deer, and some other mammals' populations need to be controlled. Shooting is a more humane way of killing them.