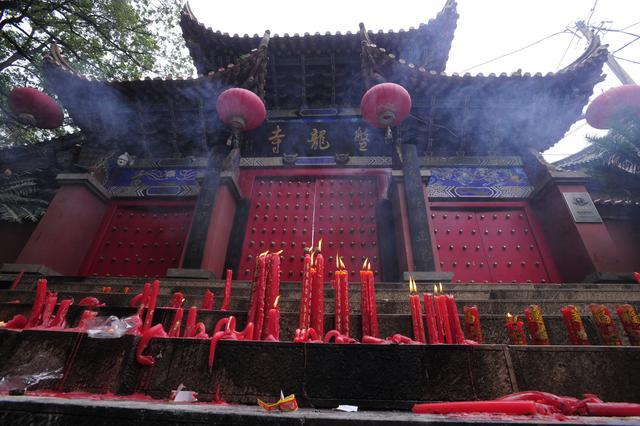 The abbot of one of Yunnan's most visited Buddhist shrines closed his temple to all visitors over the weekend. The move was made in an attempt to stave off local government efforts to renovate a popular sightseeing attraction within Panlong Temple (盘龙寺) — 50 kilometers south of Kunming. After its doors stood barred for two days in what may have been a symbolic protest, the complex reopened on August 18.

The decision to disallow visitors was made following a meeting the previous week between Jinning County (晋宁县) officials and temple administrators. At issue were plans to refurbish Wanghai Pavilion (望海樓), a temple building with panoramic views of Dianchi Lake and the surrounding mountains. The envisioned construction project would install a multi-media facility and museum inside the five-story pagoda. In a phrase repeated in nearly every media report on the situation, authorities were quoted characterizing the religious complex as "messy, run-down and disused".

Monks objected to the proposal on grounds that such plans would interfere with the temple's daily routine. A handwritten sign was placed outside of the main gate on August 15 explaining the situation. It read, in part:

Due to the fact that the Jinning County government and the Jincheng Township government wish to commercialize and corporatize Panlong Temple, thus disrupting the temple's order, [we have] decided today to temporarily shut the gates for a more quiet and meditative environment. Please understand and forgive [this decision].

Officials met with the temple's abbot again on Sunday and the facility reopened later in the day. No details have been given regarding when or if work on the contentious renovation project will begin. Local media has characterized the entire situation as a series of miscommunications, now stating "both sides have eliminated any misunderstanding."

Panlong Temple is situated approximately 20 kilometers due east of Jinning and, according to its website, stood since 1347. It was built over a seven-year period under the supervision of the monk Ren Chongzhao (任崇照). Most of the complex was destroyed 500 years later in an 1883 earthquake. It was rebuilt with money donated from local parishioners the next year and stood largely intact until the upheavals of the 1960s. Another rebuilding effort, this time funded by the government of Yunnan, commenced in the 1980s, giving Panlong Temple the look it has today.

Concerns of over-commercialization in Yunnan's Buddhist holy places is not necessarily a new occurrence. In 2009, four temples in Kunming were placed under the management of China's famed Shaolin monks for 20 years in an effort to attract more tourists. Earlier this year, several temples on Jizu Mountain (鸡足山) outside of Dali shut down in protest of a government monopoly on bus services.

I can respect this action. The government, at most levels anyway, seems to have little or no respect for the integrity of religious practice.

I think this is excellent action by the abbot. A wonderful example for all.

If you look at what has happened at the Shaolin Temple (Kungfu incorporated), it is shameful for all, IMHO.

The Chinese government is under no obligation whatsoever to have any, "respect for the integrity of religious practice." Mao himself declared that "religion is poison," and that philosophy has served both theccgovernment of the PRC and Chinese people well for decades.

Mao is dead! Following millions of Chinese.
China is moving on.

China will never earn respect until it learns to respect.

@Ahmet, that policy has not served Tibetan and Xinjiang Chinese people well at all - note the numerous expressions of their dissatisfaction.

I like this abbot. May he live a long life and never wear a Rolex under his robes. Must ride out to visit temple soon, in case government forces him out.

Great article, its sparked my interest and given me some clarity on what I want to research here in Yunnan. I'm here in a grad program and I'm thinking of doing my thesis research on something in relation to this event. If anyone has any advise, contacts, or other resources for me I'd greatly appreciate it!

@quentlow: What field of research are you talking about?

@Alien well I've got a year so I haven't developed much yet, I'm just in the stage of finding out exactly what I wanna do. With this it would most likely be focused on the socioeconomic scene of the situation in China, with the effects of Shaolin Temple's business oriented actions and people's views of them, and also maybe other authorities' views like the Abbot's. But again, I don't know much at all, it's all just gathering ideas right now.

What I mean is: are you a student of anthropology, journalism, sociology, economics, political science, or what?

Ahhh, well many of those. My Undergrad was political science, my Grad degree is International Development, but the formal research process is sociological, so sociology.

In that case, my guess is that you will have to apply for a research visa, not a simple student visa, unless you keep a rather low profile. Research permission comes with a local research assistant, and sometimes these are referred to as 'minders'.

I'm pretty sure my IRB Research certification will cover the level of research I'll be doing, which won't be too extensive, and I'm on a work visa besides. But I'll look into it a bit more to be sure, thanks.

Government greed.
Why would officials care about the appearance of a temple unless they have monetary interests.

Because they may or may not have political interests in doing so.