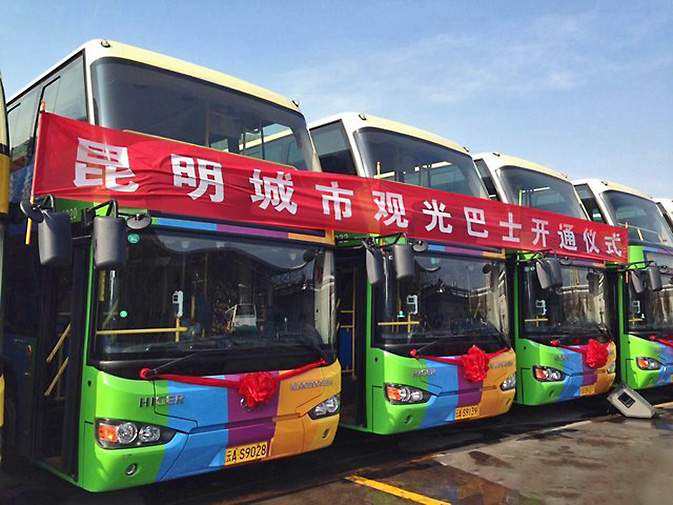 If you've been in the streets this week, you may have noticed a parti-colored double-decker bus garlanded back-to-front with red ribbons — behold, the brand-new Kunming Sightseeing Tour Bus. Fully operational since June 1, these open-top "luxury buses" now offer the public a three-hour guided tour of Kunming, including ten stops at the Spring City's most lauded destinations. Passengers may embark and debark at any of the stops.

We boarded this morning at Jiameng Flower Market, along with a group from Jiangsu and, from the sound of it, a dozen Kunming locals all speaking in dialect. "We work for the tour company," says Li, the local sitting next to us. Apparently, they have all received a day off from work to do a round-trip test ride. Pointing to a woman under a pink parasol, Li whispers, "That's the boss."

Li's company receives funds from the Kunming Tourism Development Committee (昆明市旅游发展委员会). The committee pledged a total of 100 million yuan to tourism investment in 2014 — an amount set to increase by ten percent every year. Municipal officials hope to attract 70 million tourists to the city annually by 2016. Compared to the 56 million who visited last year, this is a sizable increase.

To facilitate this growth, Spring City developers are forging ahead with infrastructure projects. Construction continues on the Kunming Metro and the long-awaited new train station, while the country's fourth-largest airport opened in June 2012. The city has funded a 1,000-square meter indoor tourist complex, a series of "dream village" resorts and a promotional film. The movie, titled "Next Stop, Kunming", tells "a fresh and touching love story" featuring Dianchi Lake, Guandu Old Town and the Stone Forest.

For those who won't see the film, the Kunming Sightseeing Bus will suffice. The top deck is comfortable, canopied and not crowded in the least. One pays for clear views of the West Pagoda, the Golden Dragon Hotel, Jinma Biji Fang and Green Lake Park, all accompanied by a tour guide's favorably worded descriptions.

One can also, between the landmark stops, look out at half-demolished buildings behind blue fences, look down into truck-beds piled with sacking and look into the street, where cars, taxis and e-bikes pass, and stop, and pass again. Once, while we were riding, a taxi driver craned his neck to see us and yelled something. But there's no knowing what he said — we were too high up to tell. 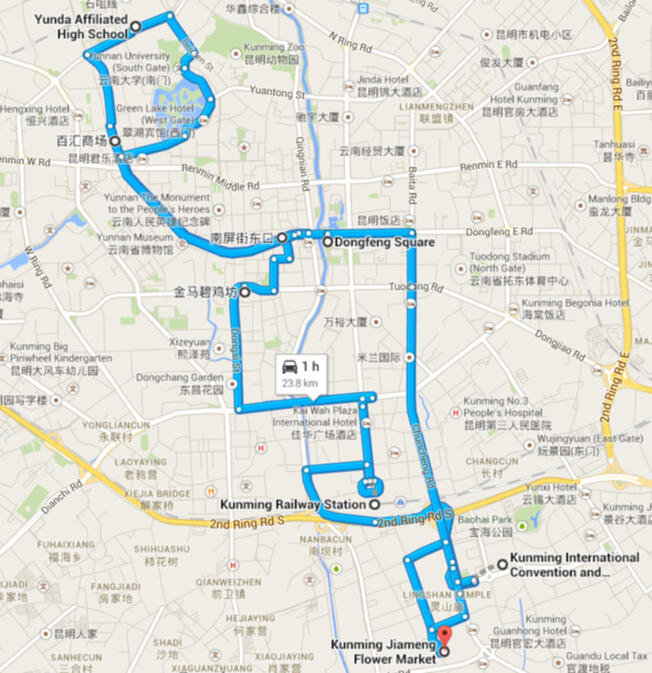 Above is the route for the Kunming Sightseeing Bus. The tour lasts approximately three hours by bus, one hour by car. Tickets cost 20 yuan. A list of stops can be found here.

Just in time for monsoon season.

"Just sit right back and you'll hear a tale, a tale of a fateful trip, That started from this tropic port, aboard this tiny ship. The mate was a mighty sailin' man, the Skipper brave and sure. Five passengers set sail that day for a three hour tour. A three hour tour."

Here is the video - Next Stop Kunming - 13 minutes long.

It is a nasty little soap opera love story

Look for a minnow on the side of the boat...I mean, bus!

3-hours?! It will take me less time to fly in to Kunming from Shanghai!

If I hadnt seen the bus today, one would think it's a joke. There is no need for a sight seeingbus. You need sights in order to have a sightseeing bus. Polluted lakes, construction sites, 'a village of tents' where builders sleep and the 2nd ring road are no sights. In cities like London and Paris it makes sense, because you can take photos of the Eiffel tower and Big Ben and so on. But here you cant see anything of the sights while sitting on the bus.
But this will only create more, definitely not needed, pollution when driving around all day long. I mean Higer is a Chinese brand. That means outdated, non environmental friendly technology. The red ribbon and the fancy colour dont help. The money the government spent on it could be better used for other things.

I will take this tour next week when the weather clears up. I have 3 hours to spare and 5 Yuan will not set me back.

My guess is that it will work, especially for tourgroups, as tourists who tour in such groups aren't too bright and tend to behave like sheep.

@Kate: however, Chinese brand names do not necessarily mean outdated, non-environmentally-friendly technology: E-bikes? Almost as good as bicycles, of which a tremendous number are still produced in China.

@Alien: I was referring to fuel powered vehicles.

@Kate: you got a point there.

A cooler Kunming day tour would be by bicycle.

This sounds pretty cool. I'll be trying it out when the weather clears up! It would be a good thing to take the kids on when they get bored during a school holiday.
Nice article.

I guess you'll get a nice view of all the empty new buildings, and the pedestrians getting ran over on the cross walks.... go Kunming! Double bonus when the tour bus itself tries to run everyone over when it takes a right turn.

the best sightseeing bus is the bus to the airport out of this concrete madness to a beach resort.

We tried taking the tour yesterday and discovered it was quite different from what we expected.

First of all, there are 2 types of tickets you can buy, neither of which was 5元. The first is 10元 and doesn't allow you to get on and off wherever you like...once you get off you're off. The problem with this ticket is that no matter where you get on the bus, you have to get off at the last stop. So, when we got on at Wen Lin Jie, they told us we would have to get off in 3 stops if we bought this ticket.

The other ticket is 20元 and you can get on and off wherever you like, but for us, that seemed like too much to pay for a simple bus tour around the downtown area. So, we explained that to the girl working on the bus (who was very helpful and friendly) and got off at the next stop.

@chelsbels84: Since the posting of this article, the tour's "trial period" has ended and the discount price of 5 yuan has been raised to the original 20.

The article has been changed. Thank you for your help!

We have family visiting us in Kunming and today for today we planned to make the bus-tour... surprise, surprise no bus there. After calling them, they told us now Tour today because the bus is broken. So, that means they just operate with one bus? I guess it was just a poor excuse for bad business (no visitors...).

We just went with the Metro... fast, reliable and cheap.

April 15, 2021 "We are looking for a part-time English teacher to work at our partner public school. Work days are Wednesdays from 9:50 am to 3:30 pm. Requirements …"
Travel Yunnan Geezer