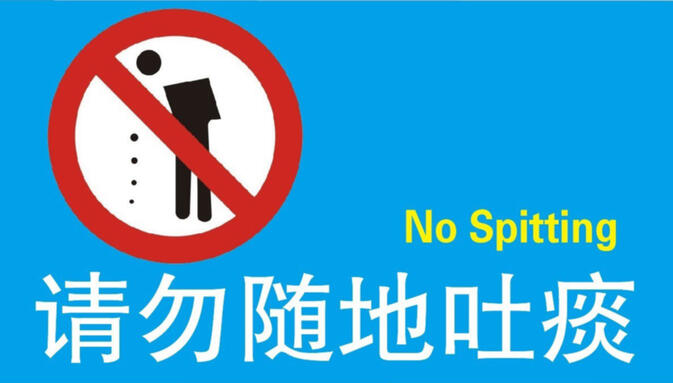 From time to time Spring City officials issue public statutes meant to curb actions deemed detrimental to a harmonious society. Often these have targeted one specific issue, such as littering or parking on the sidewalk. On April 28, however, the People's Government of Kunming went on the offensive and announced fines for a litany of actions oddly characterized as "chaotic phenomena".

The regulations, released in a document entitled "The Comprehensive Remediation of Environmental Sanitation and Traffic Order Notice", have reportedly been distributed to local police stations across Kunming. The new dictates, which cover public decorum as well as traffic and construction site etiquette, will begin to be enforced this summer on June 15.

People found to be involved in "uncivilized behavior" will be issued on-the-spot citations with monetary penalties ranging from 50 to 30,000 yuan. Recidivist offenders can face progressively rising fines or, in extreme cases, jail time. Below is a complete list of the chaotic phenomena and their accompanying consequences, as vaguely enumerated in the announcement:

The statutes issued Monday reflect those seen in several previous public campaigns, perhaps differing from their predecessors mainly in terms of scope. Five years ago, the city attempted to specifically combat spitting by distributing hundreds of thousands of environmentally friendly phlegm bags and numerous other crusades have been launched to curb all manner of naughtiness. Possibly the most interesting and confusing of these was a 2010 effort that sought to "uproot evil forces" in Kunming.

What a joke, maybe someone should tell police about this crack down. For the last several weeks going north on 3rd ring road just past Bejing road the vendors have had all but 1 lane filled at the intersection during the evening. Bicycle lanes and even more often 1-2 traffic lanes are being used for parking. Getting more dangerous riding my bicycle every day.

They've got their work cut out - I see half of these on a daily basis.

The traffic police will be the ones smoking in the corner and spitting.... while the cars will be parked down the center of the street, and cars going down the wrong way because they can't turn left due to said cars in the middle of the street.

Just saw it this week on a road just off of Beijing Lu.

Yunnan would be the richest province in China if Kunming actually enforced all these laws.

Laws without consistent enforcement do not result in any lasting change. Same as with our rules for my 2 year old daughter. Yawn.

There's a big ol poster of the above things (in Chinese) on the front of our compound - where they also incidentally post our electric bills with our names and addresses - an invitation to identity theft...I should go find out which lazy Huandan decided to post everyone's electric bill on the street facing gate...

@Laotou, don't worry, nothing will happen.

My water bill was due in autumn, bcs I was outside China. What happened was that my company abroad got an email saying the water bill (in China) is due and a bill was in the email. I sniffed it out a bit and it was registered to some island (I suppose it was something like Virgin Islands or similar.)

Anyway, I had only mentioned my company (name etc.) at the police station when I had a business visa at one time. The appartment had nothing to do with the company.

How this was done I am not sure about. The computer system at the water provider must be in some network someone of scammers, or the whole fancy "Plaza" was maybe run by scammers.