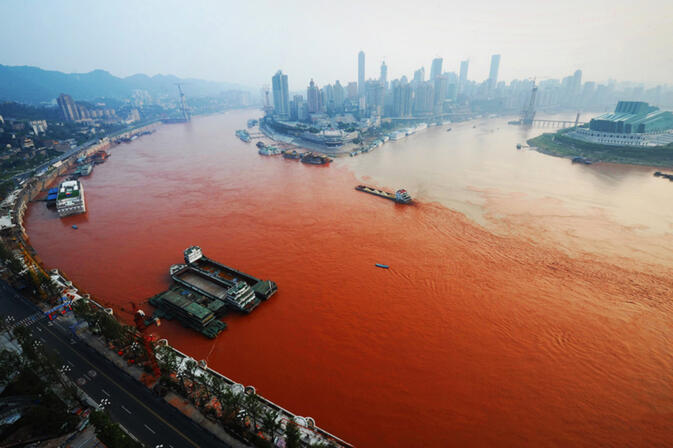 The Yangtze flows red through Chongqing in 2012

The enormous responsibility of checking construction, restrict illegal dumping and overseeing industry located along the Yantze River has fallen under the auspices of the the National Development and Reform Commission (NDRC) — a powerful arm of the Chinese government tasked with economic planning. Accompanying the announcement of NDRC control over the river, the agency released a draft report concerning the "Yangtze River Economic Belt", which broadly sets out goals for management of the waterway. An unnamed official quoted by EID said the need for sweeping changes was urgent:

A red line must be drawn on the development of Yangtze River Basin water resources. Because pollution of the basin has been very serious, if development goes unplanned, [the damage] will be exceptionally difficult to repair.

An estimated 400 million people live along the Yangtze and depend on it for all of their water needs. However, on many stretches of the river, water has become so polluted it sometimes kills fish living in it. The NDRC draft report makes the somewhat astonishing claim that 34.7 billion tons of untreated waste was dumped into the river in 2012. If accurate, this number would be the equivalent to 138 times the amount of garbage produced by United States' households each year. The NDRC included raw sewage, agricultural run-off and industrial waste when making its Yangtze dumping calculations.

In its report, the NDRC made several recommendations that, if enacted, would vastly alter the way people and businesses interact with the environment along the world's third longest waterway. The proposed guidelines include significantly reducing the use of pesticides and fertilizers in agricultural production, relocating heavy industry away from the river basin, establishing new nature reserves and promoting wetland expansion.

Provincial officials appeared to be encouraged by the NDRC paper. Following the report's release, Nanjing Secretary of Crime Prevention, Lin Zhimei (林志梅), proposed the immediate conference of municipal and provincial officials overseeing the river basin. He went on to say an ongoing series of meetings should be set up where bureaucrats would discuss environmental protection, improve information exchanges and consultations and create mechanisms for dealing with major environmental emergencies.

All recommendations made by the NDRC regarding management of the Yangtze River are currently non-binding. The Commission is now accepting remarks and recommendations from the governments of the 11 provinces and municipalities through which the river flows. A final draft resolution is expected to be issued by the end of the year.

China usually has these societal and political "campaigns", as peoples enthusiasm tends to diminish as quick as the main topics in daily news. These campaigns come up every now and than and their purpose is to "smack" a certain phenomenon every now and then.

When you clamp down on prostitutes, gambling or illegal manufacturers, its usually a month-or-so campaign, when the brothels "close" for 4 weeks until all goes back to normal again.

This is quite a funny societal phenomenon in Asia - particularly for managers trying to manage staff - but sad when it comes to the pollution. Its too late.

is see they have pulled more dead pigs out of one of the tributarieis againg, 157 this time www.theguardian.com/[...]

@Pter99, I understand what you mean about 'campaigns' in China, but I think this one may well be different. I think this is necessary and I don't think it's too late for something to be done. Seems to me it's a good idea, but I hope they carry this out in a manner that involves more than just consulting with local bureaucrats and the heads of local enterprises, who are, largely, part of the problem.

The problem is that "the problem" is too massive. And the wake-up was (at least) a decade too late. Now theres only the camouflage campaigns left. And these issues are not only ecological but have moral and confidence aspects too. Confidence has been broken in the collective conscious, and taken serious damage. And when morality in todays China is on the way down the drain, its not an easy task to have any national ethic campaigns going on. When you add to that (and the destroyed environment) the existentially lost and shocked people - and an economy (soon) on the road down - it sums up to a very scary zombie-country.

I can understand people still hold on to a honeymoon relation with China, but the chapter has changed, and its probably not a bad idea to have a backup plan in the pockets by now.

Anyway, I have stated my opinion here more than enough, and Im not going to proselytize about this forever here either - about..yes, that China has become a scary place, and its not about getting any better. Enough said.

@Peter99: Well, okay, but I have a feeling that this may finally be something more than a 'national ethic campaign'. I'm not sure what you mean by a 'backup plan'.

Just take it as a song.

And talking about it, lets change it to Dylan singing ..only a fool in here would think he's got anything to prove.

Let me add one more thing here to sum things up. Well, of course they are serious now, when even the Prime-minister has "declared war" on pollution, now when the dead soil is the size of Belgium and groundwater pretty much destroyed.

What you are saying, sort of, is that you think they can heal a leaking ship. What Im saying is that the ship is leaking in too many holes just now, and environment is just one BIG (likely irreperable) hole here. But its just one of the holes in the leaking ship.

All the foodscams and the morality related for instance, are soon resembling a civil war.

Problem is indeed massive, but ships are leaking everywhere. As for foodscams & the morality related, I don't think they will resemble civil war, nor do I think that the polluted Yangtze does either - though we're talking about 400 million people and something indeed needs to be done. I hope the central government is as serious as they say they are, but it's a big leak to plug and, yes, one has to wonder if they're up to it. Anyway, the metaphor of a leaking ship implies an absolute win/lose situation for all on board, and I don't think it's likely to turn out that way any time soon. I doubt if all the leaks will ever be completely plugged, here or anywhere - they never have - but that's no reason to stop trying.

Titanic was popular in China, wasnt it. Some did get away - thats what they say.

Apparently a part of Erhai Lake in Dali became white two days ago, and got a media nickname "Milk Sea" - likely influenced by the "Milk River" scandal.

Anyway, its reassuring to know - as the news says - that in December 2013 there has been passed a law of some kind, that says that Erhai is a source for drinking water too, and that its prohibited to throw toxics in it.

Its great things are taken seriously.