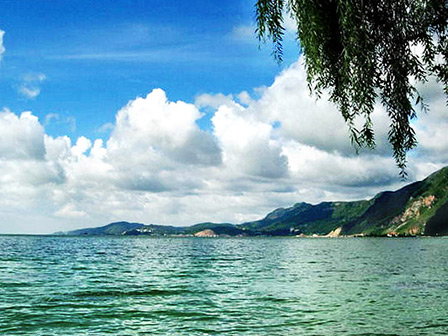 The Ministry of Environmental Protection (MEP) has released a nationwide survey of major waterways and catchment basins in an effort to catalogue pollution control efforts. The report singled out nine cities and municipalities, including Kunming and the Dianchi Lake area, for failing to meet a series of governmental water quality benchmarks.

The study was commissioned in 2012 and follows conservation guidelines broadly laid out in the central government's Twelfth Five-Year Plan. Under those directives, 60 percent of the country's rivers and lakes must be sufficiently clean to be utilized as sources of drinking water by 2015.

The survey reports Dianchi Lake lags behind the other water bodies by significant margins despite years of cleanup efforts. In the category referred to by the MEP report as "water pollution control project completion rate", Yunnan's largest body of water was rated 6.9 percent rehabilitated — 16 percent lower than the group average.

In a discussion of the report, an unnamed spokesman for the MEP listed a litany of factors that caused the nine areas and regions to fall short of required standards. Of these reasons, the representative singled out rising rural groundwater pollution levels, substandard sewage treatment facilities, construction delays and poor project management as major contributing factors.

As a result of the study findings, each of the nine regions are required to suspend all new construction projects that have the capacity to generate "major water pollution discharges." Such ventures will only be allowed to restart following MEP-conducted environmental impact studies. Which projects fall under the jurisdiction of this new policy, or how they will be evaluated, has yet to be made clear.

Beijing has earmarked 500 billion yuan (US$82 billion) over the next two years to bring pollution levels under control in the nine regions listed by the MEP report. Besides Dianchi Lake, some of the more significant regions also slated for cleanup include the vast Three Gorges reservoir, the Yellow River basin in Henan and Chaohu Lake in Anhui.

Thanks to Gokunming for keeping up these environmental issues. Its moral, and great, you dont fall in the faking picture going on in some other media.

All the food scandals, food scams, environmental destructions, air pollutions, groundwater pollutions, crap engineering, etc, - and the commercialization of Yunnan culture - makes one think, not only how uncomfortable (to use a mild word) it has become to live here, - but the question is coming closer: whether to stay at all.

Its a drag, and the Chinese people deserved so much better. Particularly the Yunnan people.

500 billion yuan to spend for cleanup? Well that would mean about 100 billion to actually be spend on the pollution.

It's a bummer, but I can't say Kunming is really uncomfortable, and am not planning on leaving - there are a lot of worse places. The thing that bothers me the most is the mushrooming of the number of automobiles over the past 6 years or so, and the construction of all the new buildings - reminds me of many US cities, but has happened with less organization.

(Sorry for going off the main topic a bit, but a brief comment.)

Go figure, but personally I suspect the engneering level so low, that after 10 years the whole fancy new city will look like some Soviet construction. Add the pollution there, traffic jams etc, and the view is even uglier.

In 2003, when, among others, Mc Donalds came to Jinbi Square (and marketed their French fries as nutrituous food with several B-vitamins for children) a few fancy complexes were built there - as in many other areas. With fancy names, indeed. Many colourful balloons were launched, and the street culture chased away.

Look at that crap now, the paint has fallen off, and the fancy Plazas look like there would have been an earthquake. Is this the prototype model for the city...oh, it will be ugly in a few years...

My own new fancy appartment (Plaza of course) is falling apart in my hands. Yesterday I moved the bookshelf and it broke by the slightest effort. The new floor is falling in pieces. A lot of stuff falls off every week. :)

Planned obsolescence is a big driver of capitalism Peter! The Chinese are just ahead of the west in realising that if they apply it to construction, it can drive their GDP. Of course it will mean the everyday people that buy their buildings, in the medium/long term, will get bitten. Just another way to spiral money upwards, the result of capitalism.

Made in China means 'junk'. Whatever they construct falls apart in a very short time be it houses, roads, dams, etc.

Kunming was actually designed by Chinas, then most famous, feng-shui master. Mu Ying, who came down to Yunnan, invited this half God mystic character from Nanjing area, to design this new southern city. He was ordered by emperor to do his best. It took Him 3 years just to find the energy points in the environment.

And a remarkable city rose. So full of magic, feng shui, beauty, charisma and potential, that the Qing army had to fight for months, until the resistance was broken. The Desheng (victory) bridge is the place were they finally managed to march in, and it still bears the name. The beauty remained intact. The history had an anchor, - it had roots.

Now, the City God temple (and the Tuzhu temple) were built on the "Yin" point, with connection to the underground. Thats around Renmin Lu today. They were changed to movie theaters a hundred years ago and were burned down when owners smoked opium there.

But the place is still there: the Ghost of the City God. That guy is pissed off by now, and launching a few incense there for Him may as well wake him up from His slumber. And then, theres a big shake for sure.

Hi Peter99, I would like to know more about the fengshui master Mu Ying and the design of Kunming. Where can I get more info about it? Thanks!

It was not Mu Ying; he merely did the invitation for Chinas best feng-shui Master. The idea was to build an immortal city with a feng-shui protection, strenght and classical beauty, - down in barbarian lands. Mu Ying was a guy who worked for the Ming Emperor, and drew out the Mongols (Yuan Dynasty) of Yunnan., - yea, while beheading over a hundred thousand aborigines too. Mu Ying came down to make the city: Yunnanfu (Kunming). For this purpose he wanted the best design and the best feng-shui.

There are several legends concerning the feng shui. Theres no English translation on any of this, as most foreigners in Yunnan have been too busy with their girlfrends or being rockstars (yea, Im provoking here). You can ask your Chinese friend to google the name of the feng-shui Master: 汪湛海, (Wang Zhanhai) or use an online translator, - that is, if you cant read Chinese.

Wang Zhanhai also wrote three - talisman sort of - stone-tablets, and buried them behind the walls and Gates of Yunnanfu.  The gates of Yunnanfu were designes as a turtle (note the 6 doors - 4 legs, head and tail) to symbolize strenght and immortality, and get this protection.

We know that on one talisman it was written ""五百年后,云南胜江南" and thats a prophecy, if you want to call it so, for around the time of Panthay.

If he would have written about 600 years instead, the story would probably have been a tragedy.

Peter99 - I can't follow you - the Mongols threw out the Ming - what 'aborigines' did Mu Ying kill, and why? And I don't understand your last sentence.

Didnt write "Mongols threw out Ming"; which is pretty f-kin obvious I didnt do dude. :)

I used the word 'aborigines' to put a less loaded word, as I didnt want to politize the point too much. I certainly dont use that word in the bar, man; these days its better to play sheep in certain issues.

Concerning the last phrase, its up to interpretation. Good question though.

One more thing, Mu Ying was considered a fair guy, although he was a conqueror. In the early MSL (Ming Shi Lu) Yunnan is called a country, as e.g. Japan is. Somebody had to do the job, and there were certainly more bloodthirsty men out there for the job than Mr. Mu, so its probably cool. He may as well fall near the same cathegory as Sayyid Ajjal or Zhuge Liang.

Oh, yea, Im writing all these details partly as entertainment now. Apologises to moderators for capturing the thread, but I hope you dont mind sometimes having some other stuff here than the general Tuborg threads, or whatever. And I do now Im near the threshold too. Anyway, whats that bloody Tuborg anyway, - it doesnt taste Tuborg at all?

Alien, the Ming records (on Yunnan and Southeast Asia) are now online; there you can find the answer to the question why theres been so much blood in Yunnan that the soil is red. Ming is just part of it, You know the red soil, dont you. Oh, yea, its global aint it.

I still don't know who 'aborigines' means - anybody but Han?

stop being so dumb oh fount of dodgy advice