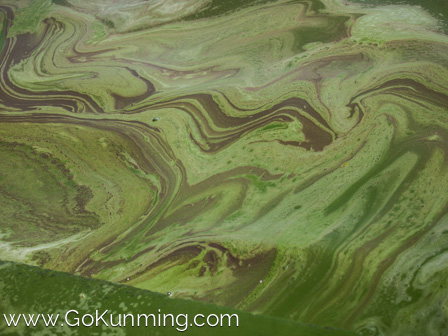 What Dianchi water looked like at Haigeng Park as of September 14, 2013

For years the waters of Dianchi Lake have been fouled by a thick and seemingly intractable algae caused by all manner of pollutants. Several expensive attempts have been made to rectify the situation — ranging from the introduction of an invasive plant species to pumping the lake full of ozone. Earlier this week another financially ambitious effort to save Dianchi went into operation.

The aim of the Dianchi Lake Water Project (滇池补水工程) is fairly simple: divert fresh water from a once unconnected river into the lake and flush it clean. The implementation of such an endeavor, however, proved to be quite complicated. The 8.4 billion yuan (US$1.38 billion) undertaking was completed September 25, following five years of planning and oft-delayed construction.

Water from the Niulan River (牛栏江) will now flow more than 100 kilometers southwest from near Songming before emptying into Kunming's Panlong River and finally reaching Dianchi Lake. On its way the water will pass through three new hydroelectric dams and ten tunnels.

The interconnected series of underground canals and pumping stations make up nearly 90 percent of the diversionary course. Construction of the tunnels was reportedly slowed by a series of cave-ins and flooding that pushed completion back several months. 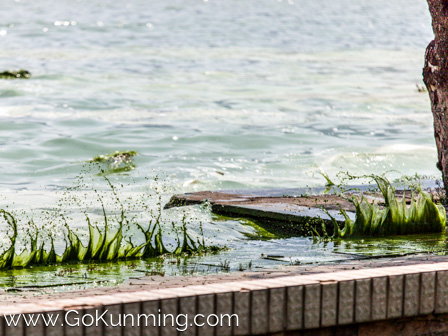 That's not grass, it's little waves of algae lapping against the shore

All told, the project will divert roughly 600 million cubic meters of "clean" water to Kunming annually. In addition to the primary goal of injecting much needed fresh water into the lake, the effort is expected to provide Kunming with another source of water in times of drought as well as generate hydropower.

The source of all this water is the Niulan River, which naturally flows northeast through Zhaotong where it empties into the Jinsha River. An estimated 13 percent of the Niulan's annual flow will now be stored behind Deze reservoir (德泽水库) before being discharged on its way toward Kunming.

The project also included building filtering and aeration facilities along the Panlong River. Many of these utilize natural filtration via plants such as bamboo as well as cascades and man-made waterfalls.

Massive water-replacement endeavours such as the one now underway for Dianchi are not without precedent. Referred to by hydrologists as dilution, the process has successfully been used in cities such as Seattle, albeit on a much smaller scale. How exactly washing away Dianchi's vast supply of algae will affect rivers and people downstream has not yet been discussed in local media.

Last time I checked heavy pollutants can't be "flushed" clean. The title should be related to this: "the effort is expected to provide Kunming with another source of water in times of drought as well as generate hydropower."

This certainly explains why the north end of the Panlong River now has flowing water in it. Previously you could walk across the river because the water level was so low and didn't even go bank to bank.

Here we go again. I wonder how much this little project will cost?

They got more money than time. Projects like this and 20 year's time will help, although the main content of pollutants will be under a layer of clean sediment.
We only have to look at the great lakes of canada US to see results of a few decades of proper management.

I just rode to the intersect where the pretty clean water hits the panlongjiang. By the time the water past the 2nd ring road, it was already kind of brown and mucky, and by the 1st ring road, it was worse. I wonder if it will be any cleaner and Dianchi by the time it reaches it.

Also, you can see the nearby shell of the fake waterfall being constructed.
en.kunming.cn/index/content/2013-07/10/content_3352720.htm

I'm friends with a retired professor who has actively opposed this project. He says that although the water from the Niulan River looks clean, it is actually very high in heavy metals - since there is a lot of industrial activity in the Songming/Qujing area. On the other hand, the water in Dianchi is still relativity low in heavy metals.

The algae blooms that riddle Dianchi are mainly caused from too much nitrogen input in the lake, stemming from fertilizer runoff and raw sewage. Nitrogen is not toxic per se, and if the inputs were curtailed then the algae blooms would diminish in due time.

But, heavy metals will last much longer in the environment and will bioaccumulate (become more concentrated higher up in the food chain).

Hopefully this provides a little food for thought. Clean-looking "fresh" water is not necessarily clean. Dirty-looking water may be much less dangerous than assumed. It seems that the local government is more invested in getting Dianchi to appear clean. At least this is my understanding. Please correct me if I'm wrong about anything.

The Great Leap Into The Cesspool.

Note the yahoo news that the Chinese government has decided to crack down on all the mixed toxic s*** sent from western countries to landfills in China - about time!

Japanese research literature and also research conducted by Kunming Science and Tech., University clearly state that the phosphate pollution (which provides substrate for blue-green algal growth) is in the sediment of Dianchi after 40 years of dumping sewerage and industrial waste into the lake. At the same time continuing industrial pollution and reducing the water volume via irrigation.

Dilution will not work. Its like adding more water to a cup of water with an ink well in the bottom, it maybe look a little less green, but it is still green. What worked was a little 'green' or should I write 'red' went west to Switzerland. The problem is all the things you can't see in China (the 1% of that 1.5 billion dollars that got spend on discretionary funds), including the source of pollution sitting 4 meters on the bottom of Dianchi lake.

Do not kid yourself, someones friend of a friend got a pile of notes along side the polly who wrote his cheque, and folks that is just the way it is here in China and also back in the West.