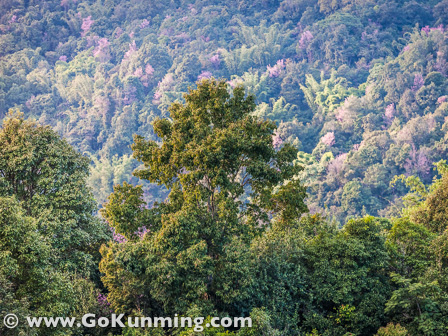 Earlier this week China held its first ever National Low Carbon Day (全国低碳日). Several of the mainland's megacities instituted cap and trade programs aimed at limiting pollution levels. Yunnan, although not required to participate by Beijing, launched a carbon sequestration program of its own.

In a provincial first, the Yunnan Development and Reform Commission has brokered a deal wherein Yunnan Forestry Investment Company (YFI) sold carbon credits worth 17,800 tons of carbon dioxide (CO2) to Guangdong-based Friends of Iron and Steel (FIS). In exchange for the credits, FIS has agreed to pay 1.07 million yuan (US$174,000).

With the money it has earned from the sale of its credits YFI is now under contract to plant and maintain forest or bamboo groves that will sequester carbon equal to the amount of credits sold. In order to accomplish this, YFI has been granted a 30-year lease by the provincial government to manage unused land in Xishuangbanna totaling 3,500 hectares — or roughly one-eighth the size of Dianchi Lake.

It is hoped the new forest managed by YFI will serve the dual purpose of becoming a carbon sink while also reclaiming land that is too steep or too eroded to support agriculture.

Once fully under cultivation, trees and bamboo grown in areas such as these are expected to capture 550,000 tons of CO2 over the course of three decades. These numbers were calculated using metrics set out in a 2005 version of the Kyoto Protocol.

Media reports have not discussed to what extent Yunnan industries are limited regarding CO2 output. However, according to Yunnan Info, per capita CO2 emission levels are down 16 percent province-wide since 2010.

Whether or not this new system of carbon trading will succeed is difficult to predict. The unit price of 60 yuan per ton of CO2 in Yunnan is 20 percent lower than its equivalent in Europe's carbon trading program. That system saw its carbon offset program crash earlier this year, largely due to CO2 credit prices deemed too insignificant to alter industry behavior.

Oh yeah, someone made money in that deal...

I wonder how much the poor farmers wielding the hoe in 40oC weather will get of that $174 000.

it's better than telling yourself that global warming does not exist because some TV presenter says so.