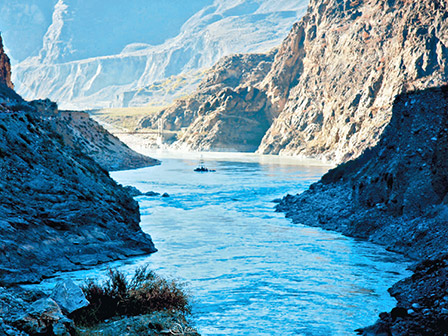 Yunnan government officials are considering mitigating the province's ongoing four-year drought, in part, by diverting the Jinsha River (金沙江). A recently issued white paper describes plans to resurrect water engineering projects along what are the primary headwaters of Asia's largest river — the Yangtze.

The scheme would annually channel 3.42 billion cubic meters of water away from the current course of the Jinsha River. The intent is to redirect that water some 877 kilometers southeast through many of the province's most populated areas.

The river would be rerouted near Benzilan (奔子栏) in Yunnan's far northwest, through Lijiang, Dali, Chuxiong, Kunming, Yuxi and smaller cities in Honghe prefecture. According to the white paper, the water will be used primarily for drought alleviation in agricultural areas.

Other goals include meeting industrial and residential water requirements as well as flushing Dianchi Lake clean of pollution. However, drought mediation seems to be the most important goal of the diversion plan.

Yunnan's yearly rainfall is erratic, but the last four years have seen rainfall levels dip below historical averages. Some areas, such as Shilin County (石林县), have received their lowest recorded rainfall in the past 49 years.

The water levels of Yunnan's nine largest lakes have dropped by an average of 0.7 meters over the last year. Government estimates say more than 24,000 square kilometers of the province have been directly affected by the drought, leading to projected economic losses of 39.6 billion yuan (US$6.45 billion).

The proposal to reroute water from the Jinsha River must be reviewed by the National Ministry of Water Resources. How this will impact the downstream economies of China's most prosperous cities or the worlds largest hydroelectric power plant — The Three Gorges Dam — has yet to be determined.

If former plans, such as damming Tiger Leaping Gorge and the oft-stalled construction of a hydroelectric plant on the Jinsha River are any indication, it may take years for officials to decide on this behemoth scheme.

There are a total of ten dams on the Jinsha River downstream of Benzilan (one finished, nine under construction) just within Yunnan Province alone that would be affected, not to mention the Three Gorges.

If this project is for real, it would require pumping the water over countless mountain ranges on its way from Northeast to Southwest at incredibly energy cost.

Besides, how many farmers' do they think they can water with a portion of one river's water, anyway?

A ridiculous proposal, drought notwithstanding

Yes, now they seem to have really lost it...

I'm not a fan of this idea, but the California has done the this and it got rich. So, Americans at least, probably have little moral say in this matter.

You can say: "I'm not a fan of this idea but California has done this and has gotten rich."

I dont think they will pump up mountain ranges, they tunnel and bridge..

The elevation at the point of extraction is the same as kunming's elevation therefore gravity would be at work ....

Big project no doubt but a lot more efficient than cloud seeding..

wish they all could be the california girls!

It's really hard to judge this project without many specific details. Huge projects like this require elaborate studies for the many different engineering and economic challenges as well as the potential risks vs. benefits, not to mention the dangers to the environment. (alas I fear the latter is given the lowest priority)

Evaluation of the effects of the loss of the water to existing waterways and adjacent lands is an enormous task.

Then there is always the very good chance that after years of planning, design and with construction underway, a substantial change in weather patterns could bring vast quantities of rain, filling up the now dry reservoirs and making the project obsolete.

Who can say what the future holds for us? With all the uncertainties of global climate change it may be a smart move... or not....

The projected demand for clean potable water has been predicted for many years to be the most important single requirement facing the world. However waste continues to exacerbate all of these problems.

California wastes huge amounts of water in agriculture and continues to do so! Water wars started there over a century ago!

The Israelis have developed the most sophisticated and most efficient drip irrigation systems in the world. Their state of the art technologies grow high quality foods in arid climes.

I think the billions could be spent more effectively by educating farmers to use more efficient watering systems, increasing yields and reducing pollution. You can buy an awful lot of drip irrigation plastic pipe for very little money.

But I don't know much about growing rice which seems to be very water intensive... There has to be a way to develop a wholistic approach to solve this problem without creating new ones.

It is a well know fact that intensive animal farming is an ecological disaster.

As some have pointed, i guess is first individuals must make themselves responsible for their consumption, pollution and exploitation.

In termes of animal what is one responsible for: unnatural ownership that can go as far as kind of slavery or torture (battery chicken that these days give national disease) ?

Tasty is for you an ethical criteria ? How do u base an ethics on pleasure or being tasty ? For instance, rape is tasty ?

Other questions i not interested to answer. And if u think artificial insemination is ethical, hope is good karma for u in next lives if it is the case.

All the more the topic is on intensive animal farming and ecology, a question u do not seem to have to meditated

uh haaa..! and what kind of shoes do you wear!?

ohh.. and by the way YOU are the only one talking about animals..Again! this topic is about rerouting a river ...you try to turn every topic into some "save the animals sexiness" thing! I am surprised i am the only one who seems annoyed by this!

you do not seem mindful at all..

Everyone take a deep breath...
Comments for this article are locked.