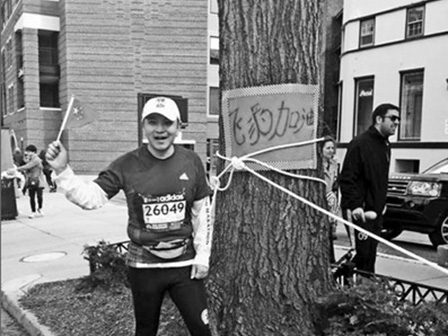 Jin Feibao about to begin the 2013 Boston Marathon

More than 23,000 people participated in the Boston Marathon earlier this week. Of those, an estimated 7,500 people could not finish when the race was cancelled as it passed the four-hour mark. Two homemade bombs, reportedly constructed from pressure cookers and filled with nails, were detonated near the race finish line. The explosions killed three, wounded 175 and lead to the race's early end.

One of the runners unable to finish was Kunming's own Jin Feibao (金飞豹). He was running the Boston Marathon for the first time and was near the 40-kilometer (25-mile) mark when the bombs exploded.

Jin's long-time collaborator and friend Gregg Millet was filming the marathon with his family and waiting to catch a glimpse of Jin when security informed him the race was cancelled. The video below shows Jin running up to meet his friends, waving a Chinese flag and then turning to finish the race, unaware of the carnage at the finish line.

This is perhaps the first time Jin Feibao has not completed one the goals he has set for himself. A tireless adventurer, explorer and fitness advocate, Jin's exploits have earned him the title "modern China's greatest adventurer."

In just over 18 months spanning 2006 and 2007, Jin summited the tallest peak on every continent and reached both the north and south poles. He also became the first Chinese person to walk across Greenland and then, perhaps to warm himself up, crossed the Sahara Desert on foot. He still has plans to become China's first space tourist and is organizing a voyage retracing the 15th-century ocean expeditions of China's greatest maritime commander, Zheng He (郑和).

Jin, who was running in his sixth marathon, described the scene in Boston as scary but fairly calm. "I send my sincerest condolences to those who were killed in this vicious incident," Jin told Chinese media by phone.

The address of the finish line of the marathon was: 666 Boylston Street, Boston, MA

Not surprise. Have you seen the photos that they are using asking:"The FBI want America to find these guys". They are blurry as shit. With all the HD camera and videos, the best they can post are these blurry images? Come on! They said : "Other photos will not be deemed credible". What a joke! This was all an FBI false flag gone array. The FBI/CIA are always setting people up to be the patsy.

just watched this video on youtube. some guy spotted an ABC news report where a guy walks by what looks like a body part and blood. and after he walks by, it's gone and there's some weird object.

I call it the moving blood stain or the disappearing blood stain. I use disclosetv in case some viewers do NOT have a VPN to download from Youtube. www.disclose.tv/[...]

Is this guy a millionaire? How does he fund all these expeditions? Airfare alone would bankrupt the average person.

In just over 18 months spanning 2006 and 2007, Jin summited the tallest peak on every continent and reached both the north and south poles. He also became the first Chinese person to walk across Greenland and then, perhaps to warm himself up, crossed the Sahara Desert on foot. He still has plans to become China's first space tourist

vigilant citizen's latest article lists a bunch of massacres that have taken place during the second part of April.

Shows the before and after fake photo
www.disclose.tv/[...]

Indeed, I used to see his photo on city buses from time to time as part of product endorsement ads. He's a very well known brand, in Yunnan at least.

Retired Lieutenant Colonel Potter Weighs In On Boston Bombing Being a False Flag (on u-tube):

"There are forces at odds with each other in the US govt. there's a war going on inside the govt and it's going to spill out into the general population."

I think this guy, in his 1 and a half minute video, shows fairly conclusively that the guy they claim did it didn't do it and also shows who did do it. i highly recommend taking 1 and half minutes from your busy lives to check this video out. Have fun, kids!
Boston Bombing False flag evidence with enhanced lighting

another good video with crisis actors and fake blood

What should the Normal reaction be to a situation like this?

Yes, Anger, betrayal, rage - all these come to mind - these are the Normal reactions of a human being - not the typical apathy of most - ho hum and back to the sport of the month, super bowl just finished so now its time for rugby. That and all the stupid videos that get over a million hits about Miley Cyrus or the new bitch of the month.

just watched "Kill The Messenger". you guys might like it. it's a conspiracy movie. a report about how the CIA was smuggling drugs came out, but people were paying more attention to the clinton/monica lewinsky scandal.

Recruiting for the next flase flag - Oceanside, Ca is the city directly outside of Camp Pendleton

are aliens behind the boston marathon bombings?