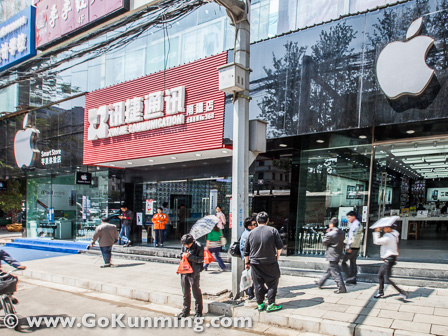 The idea to open several thousand retail outlets in one city is the brainchild of company founder Steve Jobs and Apple Director of International Marketing Maria Manzana. The two concocted the idea in 2011 as a response to the discovery of several fake Apple stores in Kunming.

Those stores, although often selling legitimate products, were not licensed by Apple to do so. The story was picked up internationally and highlighted ongoing intellectual property rights (IPR) problems in China. Despite becoming a member of the World Trade organization in 2001 — which ostensibly requires a country to eliminate product piracy — China has found it difficult to control the production and distribution of fake goods.

Jobs and Manzana decided a more direct approach, one that eschewed government enforcement, would more quickly and easily resolve Apple's IPR issues. They elected to focus on Kunming and came up with a broad plan to saturate the market and raise consumer awareness.

The plan included opening retail outlets at dozens of locations per month. Many of the stores are tiny and only sell a few of the company's accessories while others are huge multi-story complexes with dozens of employees. Manzana said the goal was not simply to provide access to legitimately sold goods but also to make the company as ubiquitous as possible. The initiative was launched shortly before Jobs' death in October 2011.

In addition to the store-opening blitz, a series of non-electronic products were released. These were Yunnan-specific in marketing and included Apple bongs, cigarette lighters, ashtrays, and a line of apple-shaped Pu'er tea cakes.

The company also introduced its own version of a local culinary favorite — apple flavored rice noodles — or pingguo mixian (苹果米线). A series of home appliances were also rolled out, perhaps the most popular being the iPhone stove.

The grand opening of the 5,000th store took place on an island in Green Lake Park on the 37th anniversary of the company's founding. Manzana said she was happy to have overseen the project, telling reporters: "I am confident this marketing strategy has ended piracy and intellectual property theft in Kunming for the foreseeable future."

A haaa haaa haa haaa, not fooled for a second, but good try :-)

Yunnan is awesome for Apple shopping. I got one of these:
www.likecool.com/Gear/Gadget/iArm/iArm.jpg

It makes cycling so much easier now. I don't get lost when going through the back trails of Xishan anymore.

I wasn't so much as fooled by dumbfounded. Come to think of it, I was fooled.

an idea of Steve Jobs? You been Tomb Sweeping already?

Is it Apple fools day?

April fools or not there are 3 Apple stores within a few feet from each other. WTF!?