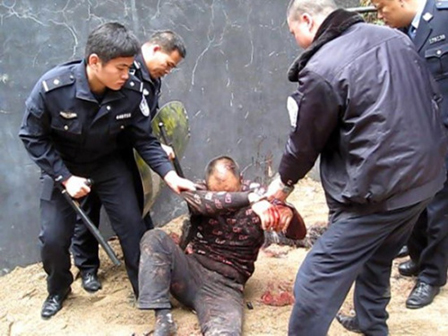 In a strange incident at a Guangdong province zoo, a man managed to attack and kill an ostrich with a knife. The Yunnanese man was apparently acting out a convoluted suicide attempt triggered by an untreated mental illness.

The 27-year old man, surnamed Li, reportedly jumped out of a tour trolley at the Shaoguan Forest Park (韶关市区森林公园) and rolled down a 10-meter embankment. Police originally thought he had fallen into an enclosure housing a Siberian tiger. However, he was later properly located in an ostrich cage waving a knife.

While tourists and police officers watched, Li reportedly attacked an ostrich and slit its throat with a knife. He then began biting the bird's neck and sucked out the blood as the animal died. The man then slashed his own wrists in an apparent suicide attempt.

After the ostrich had expired and while police considered what to do, video shot by a local television station shows the man put his bleeding hands behind his head and lounged on the dead animal's body. Police eventually entered the enclosure with riot shields and subdued Li but not before he pointed his finger — miming a pistol — and shot at them.

Police officers took Li to a local hospital for treatment and observation. A spokesman later told the press two suicide notes had been discovered in Li's pockets by police. One was addressed to his parents and the other to his girlfriend. He was reportedly despondent over his untreated, and unspecified, medical condition.

Inexplicable behavior by people visiting zoos in China is not new. After a recent snowstorm, lions in Beijing were pelted with snowballs by aggressive tourists. Also, a sleeping crocodile at a Shenzhen zoo was killed when tourists questioning the authenticity of the animal hurled garbage and large rocks at it to make sure it was real.