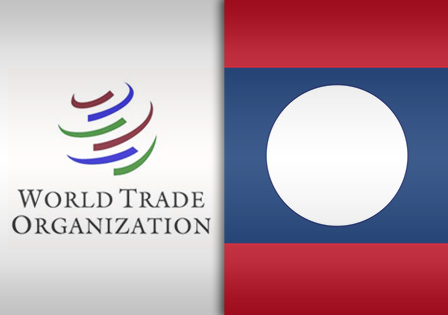 Laos will officially become the 158th member of the World Trade Organization (WTO) if the country's National Assembly ratifies the plan later this year. On October 26 the WTO General Council approved the small, landlocked country for admission to the world's largest trade group, Life newspaper is reporting.

Approval by the National Assembly appears to be a formality and will complete a process that first began in 1997. Detailed requirements for membership vary from country to country and Laos had to rewrite dozens of laws or design entirely new ones. In all, the country modified 90 laws regarding taxes, corporate governance and intellectual property.

Accession to the WTO requires that Laos signs more than 60 internationally recognized agreements governing everything from food safety to tariff limits to standards of weights and measures.

Laos is already a member of the Association of Southeast Asian Nations (ASEAN) and is the final country in that bloc to gain admittance to the WTO. Southeast Asian countries have been working to integrate their economies in order to "present a single-market, more-viable investment alternative to China," according to a Wall Street Journal report.

To this end, ASEAN is expected to form the ASEAN Economic Community by 2015. The group plans to court international investment and manufacturing that have until recently gone to China. Laos may find it necessary to perform a difficult balancing act as it cooperates with its ASEAN partners while simultaneously increasing economic ties to China.

One day after the WTO announcement the Laos government voted to accept railroad construction loans from China totaling US$7 billion. The money will be used to finance a 420 kilometer high-speed railway connecting the Laos capital, Vientiane, with Yunnan province.

The line will also pass through Luang Prabang and Vang Vieng before crossing the Chinese border near the town of Boten. Construction of the railway on the Chinese side of the border between Boten and Kunming is currently underway.

An initial agreement outlining Chinese financing and construction of the rail line was shelved last year due to mainland concerns about profitability. Now Laos will build the passenger and freight line through domestic companies, although still with Chinese funding.

It is unclear how much Laos will benefit from this past weekend's events, but it appears the largely agricultural country is pinning its hopes to international trade — and increased connectivity with China. Chinese ambassador to the WTO Yi Xiaozhun (易小准) praised Laos on its impending membership:

Over this 15-year period, Lao PDR has undertaken profound domestic reforms and adjustments for its WTO accession. The negotiating team has done an admirable job in this complex and challenging process.

Another one bites the dust! Great, another member of the WTO, UN and USA. It is time for Laos to begin to follow all the rules set forth by the USA and UN. Got to protect the Individual Property Rights of the rich. Time to crack down on the illegal DVD vendors. No more downloading FREE music or videos. Time to roll in all the wonderful GMO crops.

The plan by the Lao government to still go ahead with the railway project is unbelievable. Neighboring Vietnam voted not to go ahead with a planned Ho Chi Minh to Hanoi high speed rail link due to concerns about profitability (i.e. not enough Vietnamese would be able to afford a ticket despite having a reasonably sized middle class at least in Hanoi and Saigon).

Now Laos, with only just over 6 million people and a tiny middle class wants to do the same? Good luck! However, I wouldn't be surprised if in 6 months from now I read in the Vientiane Times that the project has been put on hold again.

I'd suggest stick to a normal speed train that locals will actually be able to afford, going high-speed while neither Thailand nor Vietnam, two neighboring economic juggernaughts have plans to do the same is quite far fetched, I'll believe it when I see it but it seems like a crazy idea for now!

The only good news is that Laos can take control of the railway project and not have to worry about the previous 5km land concession on either side of the tracks that was previously demanded by the Chinese side.

It looks like Malaysia firm Giant Consolidated Ltd has stepped in to fill the void left by Chinese contractors. A 50-year concession seems like an awfully long time:

50 years isn't excessive given the amount of infrastructure to be built along with the rail. Also, factor in the low population density of Laos, hilly terrain, and most of the equipment will have to be imported, 50 years is about right. Even the USA has handed out some 50 and even 75 year BOT contracts.