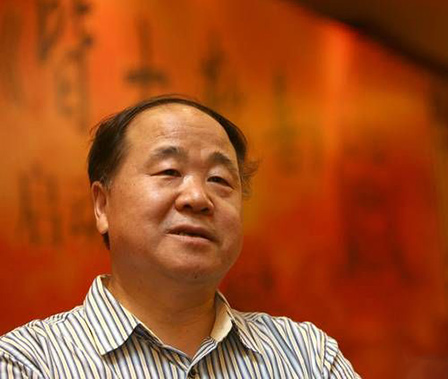 Although Mo had achieved some level of success and acclaim, in 1994 he found it difficult to get his manuscript Big Breasts and Wide Hips (丰乳肥臀) published. The novel was first published in 1995 by Kunming magazine Dajia (大家), Yunnan Net is reporting.

Dajia, translated as "Master" by its publishers, issued the novel serially over several issues. Li Wei, then editor-in-chief of the magazine, recalled that he traveled to Bejing to secure the book's publishing rights and was shocked he was the first to inquire about them.

Li remembers there were some problems when his magazine first began publishing Mo's work. "It generated some controversy, but this is normal. No good literary work is without controversy. There are 100 different Hamlets in 100 different peoples' eyes," said Li.

The controversy was not generated so much by the novel's title as by Mo's literary style and subject matter. Big Breasts and Wide Hips was criticized for its stark portrayal of life during the Cultural Revolution.

This is a subject Mo has repeatedly delved into in his other works. Big Breasts and Wide Hips is also a work devoid of powerful male characters. The novel is primarily concerned with strong women and weak, or ineffectual men. The book has gone on to become one of Mo's more recognized and heralded works.

Mo is the first Chinese citizen to win the Nobel Prize for literature and is being lionized around China despite often skirting controversy with his novels. His writing style incorporates elements of magical realism and has been compared favorably to authors such as Gabriel García Márquez and Haruki Murakami.

Gao Xingjian was the first Chinese person to be awarded the Nobel Prize for Literature. China was not pleased about it and tried to ignore it happened.

Is this already too controversial for the new GoKM?

Gao Xingjian was awarded the Nobel Prize for literature in 2000. Although born in China in Jiangxi Province in 1940, he became a French citizen in 1997. There is no controversy – the Nobel Foundation recognizes Gao as French, as does the Chinese government. If you want to quibble, Gao was the first Chinese-born winner of the prize. Mo is the first Chinese citizen, as it clearly states in the article's final paragraph.

... 'as it clearly states in the article's final paragraph'...that you changed after I posted my comment.

The previous version said 'Mo is the first Chinese to win...', no mention of the cop-out 'citizen' in your initial version.

A mistake is one thing, a stupid mistake is another thing, not having the integrity to own up to it is three steps down from that. Shame on you.

Gao Xingjian was born in China, wrote in Chinese, got his book published in Taiwan, wrote about his life in China and everybody understood the award as criticism of contemporary China/Chinese literature.

The guy is French, obviously.

Correction: your original page said he is the 'Mo is the first Chinese person to win the Nobel Prize for literature'.

Double checked with the Google cache:

Shame on you, Patrick, for changing the article and pretending you did not.

Basically the whole world has been China's since ancient times anyway, so can't we just leave it at that?

I have also noticed some post publishing "fixes" where the story is quietly changed after posting. This is NOT a good look for any site that reports news. Looks like I will be taking everything reported from GoKM with a grain of salt in the future if this is how you operate now...

Recommend you change your internal procedures - any changes to articles should be clearly noted at the bottom of your story, either in comments or attached to the story. Otherwise you are asking for trouble. And you come off looking especially bad when acting like you didn't make a change when you did... not impressed.

Shame on me indeed. It was a huge error in judgement born out of frustration and grumpiness. Regardless of the reasons, what should have been a simple correction is instead now a glaring mistake. It was amateurish, dishonest and petty. Unfortunately this reflects badly on GoKunming when it should reflect badly on me alone. My apologies to @ludwig and to GoKunming's readers.

Apology accepted! I know there was no malicious intent. We all learn from our mistakes.

Apology accepted, sometimes in the heat of the moment we do things that we know are not right and regret later.

However, there is a different aspect to this story, which prompted my original comment. Certain countries try to erase unwelcome people from their collective memory. For writers this means: their books never published, their plays not performed, their names not mentioned. In the case of Gao Xingjian the official Chinese response was to deny that he is Chinese and he has become one of those unmentionables: so for the Chinese media, Mo Yan is the first Chinese to receive the Nobel prize for Literature.

I can accept that GoKM tries to avoid anything that is even remotely controversial (even though that is a marked change from the previous owners and GoKM appears to be more Catholic than the pope by even not mentioning Kunming events that are widely reported in the Chinese media, the most recent involving a Fujian official and a Kunming newspaper). But I do draw the line where this policy turns not just into statements that are not true, but that collude in the practice of erasing dissidents from collective memory.

There has been another Chinese writer receiving a major literary award with two more than tenuous connections to Yunnan. Searching for 'Friedenspreis 2012' will give you a few more details.

thank you for accepting the apology on my behalf. I did not know I had an impostor on GoKM.

@ludwig I'm not as smart as you. Just sayin'.

Ludwig, I completely respect your desire to maintain journalistic integrity. It too, frustrates me when societies impose collective amnesia for people and events that don't align with the existing power structure.

However, there are a couple of serious accusations you implied that might deserve more explanation than the subtext of you preferring the previous owners. "Colluding" implies a position of activism, that GK *actively* participates in effacing the memory of dissidents as opposed to it being the unfortunate by-product of a journalistic error. This distinction is important because it presents the issue as one of quality vs corruption, the latter being detrimental to the core credibility of this media outlet, and such things should never be implied without proof.

Secondly, media outlets vary in terms of coverage, New York Times rarely overlap the content I read on Gawkers for example, different target audience, different focal point. I don't think GK ever positioned itself as a source of hard hitting investigative journalism into the politics of China, but rather a hub for information that's mostly relevant for travelers and expats - pretty lighthearted in most cases. If it's a matter of content and the direction of the new site, I respect your position. But again, by saying GK avoids anything remotely controversial implies subterfuge, which is probably the most reproachable offense in journalism. Can you substantiate this?

Bottom line, I see why you're frustrated, I just think measure and care need to be taken when it comes to statements that could destroy a news organization.

@helface
You misunderstood me if you thought that I was expecting GoKM to be anything but lighthearted. Not reporting controversial issues is a practical solution to a real problem and as nothing of that nature appears in GoKM I assume that this an editorial decision. This is fine with me.

As I said, I draw the line where this turns into a bizarre defense of distorted facts that have significant meaning in this country, assisted by some semantic trickery and hidden editing.

Is that really asking too much?

Omission is different from distortion.

I'm not defending the editor's original omission of 高行健 nor his subsequent attempt to hide the mistake, but my point is that I don't think he did it intentionally to efface the memory of dissidents, which was the point you implied by using the word collude.

I also don't think I misunderstood you with respect to your statement (and undertone) on how GK avoids anything controversial. I think you conflated your preference and expectation of what GK should be with what it appropriately and ethically should be.

Again, I respect your opinions and I understand your frustration, I just don't like to see GK being scapegoated for a bunch of socio-political issues that it really has no power to influence.

Hmm although personally I believe that gok ultimately has the readers best intention in mind, I can see how one may draw on a few things regarding colluding.

First @scully understands how this may reflect badly on gok. It is natural to assume that relationship because today's journalism is hardly the work on an individual. There are editors and then the ppl who publish it, whether uploading online or printing, who are all reading or screening or editing the article.

Either way, this seems to be resolved and we should just look to the future of gok.

"But again, by saying GK avoids anything remotely controversial implies subterfuge, which is probably the most reproachable offense in journalism. Can you substantiate this?"

On your second point, that's quite easy. Simply take a look at which forums end up with the "thread locked." No one expects GoK to be hard hitting journalism, but we also don't want self censorship or reading stuff that follows the party line.

I think Scally made an honest mistake. As usual, the cover up ends up worse than the crime. He has apologized publicly, profusely and personally to ludwig. I'll still look forward to Scally's articles.