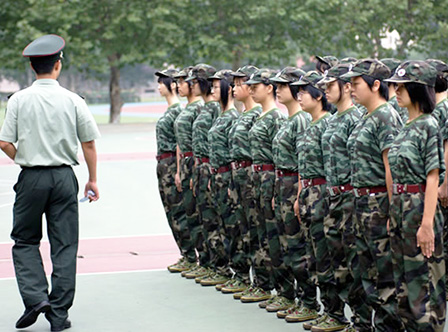 College freshmen across China are showing up for the first day of classes in worse physical condition than their predecessors. Many students are out of shape and unable to sufficiently complete military training. This is the culmination of a twenty-five year trend in declining student fitness levels nationwide, according to a series of reports by Yunnan Net.

The reports cite the National Students' Physical Health Survey (全国学生体质与健康调研), which has been conducted six times since 1985. On several occasions the survey refers to "grim" student health and states that new students are often "too heavy or too thin" to perform well on rudimentary physical tests administered during their military training.

Those tests involve running a timed 1,000-meter race to test endurance as well as performing a standing long jump to test agility. According to the survey, the statistics used to measure fitness during the compulsory training have been on the decline for 27 years. The report uses the example of 3,500 freshmen at Beijing University who visited doctors 6,000 times during their two week military training as representative of the current national situation.

GoKunming spoke with students attending colleges in Kunming to discuss the report and its findings. Xiong Xiaoxiao, a sophomore at Yunnan Normal University's School of Business, reported that the majority of her classmates found their military training exceedingly difficult. One of her classmates fainted during the training.

When asked what reasons she thought may be leading to the declining levels of student fitness, Xiong was blunt: "College kids are becoming increasingly lazy and because many of them are rich, they don't have to do anything physical."

The results of the nationwide tests have led to heated discussions on college message boards. Some netizens are blaming a lack of physical education classes at high schools, while others are blaming the universities themselves. Wang Dengfeng (王登峰), who oversees the Ministry of Education's Physical Education Department, said of the argument:

No matter who is ultimately responsible, colleges and universities should consider how to make up for whatever students missed out on during their primary and secondary education.

It's because too many spend too much time surfing the internet, watching t.v. and playing video games. All these activities are sitting down. Mind you that they do this while eating snacks and the like.

There is no emphasis on sport in schools. Yes kids to physical jerks every day, but it is not strenuous. Also, participating in a real sport will lead to improved physical dexterity (as well as strength), and for team sports kids will learn to be part of a unit that works together, something missing at the moment.

Not everyone will excel at sport, but all who do it will benefit in many ways. Not just in fitness.

The comment about kids going to the doctors during military training in the article. There is nothing wrong with the kids, this is a 'sick note' culture developing. "Mummy, I don't want to go to school today. My tummy hurts".

In the past few years there has been an increased reliance on cars and e-bikes. I can see the change in only 5 years. Where people used to walk or take real bicycles they are now reliant on machinery.

In that same 5 years span I've seen a huge increase in the number of fast food outlets around Kunming.

It would appear that China is going the way of North America with poor diets and lack of exercise.

The article is confusing since it talks specifically of a study involving 3,500 Beijing University students but then talks vaguely about some 'nationwide' survey.
I prefer to believe the evidence of my own eyes that lead me to be sceptical about how representative this is of all university and college students here in Kunming (Yunnan).

Even if it were proved to be true I don't see how it helps by placing the burden of rectifying the situation on colleges and universities. The latter have their own academic function from which they are already too often and too easily distracted. If anything, university students need more time to be left alone to make their own decisions and think for themselves. If they are not mature enough to do so then schools, high schools, parents and guardians are to blame and again, why should universities be called on to make up for the deficiencies of others? Logically universities can not eradicate the problem since only a proportion of school leavers go on to university.

If it is true and it really is a problem of epidemic proportions here in Yunnan also, which I doubt, then I personally would look to the hot house atmosphere in the years leading up to the Gao Kao examinations before I chose the easy target of blaming Internet, TV and Video games. As for China going the way of North America, the evidence of my eyes is that as many, if not more, students suffer from being underweight than overweight here in Yunnan - hardly a mirror image of the obesity epidemic reeking havoc across large swathes of North America.

Whatever the case, I truly hope there is a minister for higher or University Education who is big enough to overall the Ministry of Education's PE department who look to be making a land grab on the already overcrowded and full timetable of university students.

@AlPage48 You are so right. I remember when the west always talked about how slim the Chinese are and quite frankly, I've been seeing more and more heavy set people around where I live. A lot of parents are taking their kids to the fast food since they are so busy and have little time to cook.

I agree that it is not the fault of the university. The university is just where these out of shape kids end up.

There is a cultural issue and the parents are part of the problem. Most parents would let their kids study longer and sleep less, which is why laws were introduced to limit school hours.

The only way to effect uniform change is for sport to be mandatory in schools. If all kids spend a few hours less in the classroom there is still equity of learning hours in all schools. Some of the heat of GaoKao will be off, not increased.

The study harder, get better grades, get to a better school, get better grades IS a virtuous circle. But only if you look at grades and forget the whole person. These kids may be top academically but may be physically, and emotionally damaged. This also impacts in their future families and this will affect society.

Since when did a 1 kilometre run become an 'endurance' test? During handball and football practice, our endurance training was rarely less than a 5 km run. Apart from that, many of my students talk enthusiastically about sports but when do they have time to train? My high school kids attend school 7 days a week, 6 of those from 8 morning to 11 at night (with 2x 1.5 hours breaks) and the little time left not spent at school is used for homework and what few extracurricular activities they have left, and they are always study related. At the start of this semester when a 1-on-1 student began 10th grade she finally had to give up on her piano lessons and her track and field (which she had enjoyed immensely) as well as her extra maths lessons because there's just no way for her to keep it up. Hell, even finding time for her private English lessons took 2 weeks of sorting out her schedule and intense planning. Before China begins complaining about the priorities of the youngsters, they ought to take a good, hard look at how the educational business is conducted and how teenagers are treated in this setting.

and in polluted cities it is just as harmful to do exercise outside as it is to do none, so why bother?

Stay home, keep your skin white and play with a gadget. So many gadgets to choose from.

they say the kids are not as healthy and fit as they were 40 years ago. to be honest, netierh am i

Although some kids are not slim as they used to be - some middle school kids are tall and big now because of all those hormone grown meats - The majority still remain relatively slim.

However, they are very weak and out of shape because they sit in school all day and at home also doing homework.

They barely can do a few pushups, can not even do a pul-up - like private Pyle, and they get tired after walking short distances.

i can't do any pushups. i don't feel the need to lift anything heavier than my guitar, let alone my body weight.

private pyle was smart. he ate too many doughnuts so he didn't have to get sent to the front lines.