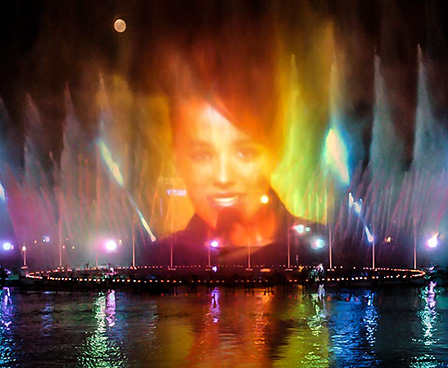 Beginning October 1, visitors to Green Lake Park may have to bring umbrellas even on clear days. A new system of fountains being installed in the park will be capable of sending plumes of water higher than a five-storey building, creating a temporary movie screen, Life newspaper is reporting.

The fountain is composed of 323 computer-controlled nozzles. The water system is augmented by an array of spotlights and 12 surround-sound speakers. When in operation the water 'curtain' will be 50 meters long and 16 meters high. Short, original movies will be projected onto the fountain mist and refracted to create what designers are calling a holographic 3D experience.

Work on the musical fountain (水幕电影) began in August and construction is expected to be completed by September 30. The fountain will have its debut performance on the evening of National Day.

When not providing the screen for movies, the fountains will be employed to stage specially choreographed performances combining water jets, lights, lasers and music. Due to the size of the water curtain, performances will be free to the public. 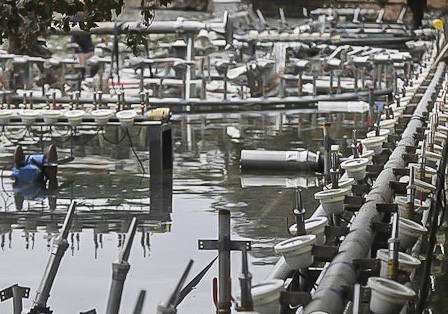 Only one 15-minute film has so far been completed and choreographed, according to the Life newspaper report. It features images of the Stone Forest, Western Hills and, not surprisingly, Across the Bridge rice noodles. Other short films about Kunming are in production and will be added to the fountain repertoire as they are finished.

The fountains are positioned near the east gate of Green Lake Park across the street from Green Lake Hotel. This site was chosen in an effort to position the water curtain away from areas where migrating Siberian sea gulls gather during winter.

Major musical fountain performances will be held during official holidays and occasionally on weekends. No permanent schedule has been announced and officials have said there are no plans to show feature-length films at the fountain.

Great! Hopefully they will also think about opening some nicer cafes/restaurants than the existing ones to be able to enjoy the redecorated park.

I've been told that they are going to charge 50rmb. to enter the park once the beautification is complete.

does anyone know if they are going to get rids of those eye sores that are floating on the water? They are really tacky.

Many other cities have failed to introduce admission to long established public parks in cities. This includes RenMin Park in Shanghai.
All due to pensioner power.

To be honest, this noise and light show will be another reason not to visit Green Lake.
Spinal Tap did not invent turning it up to 11.

In my experience, whilst the Chinese build some things very well (tunnels, bridges, etc), they struggle with ponds, fountains etc. I've seen so many empty or algae-filled ponds with fountains simply turned off or malfunctioning. I suspect this will go the same way once the novelty has worn off.

If the picture in the article is recent, it also shows another design problem with Chinese fountains.

All the pipework and lights are usually above the water. This is easier for maintenance, but in the 99% of the time when the fountain is not operating, it is an eyesore. Putting the pipes, etc. below the water is done in most other countries, that way people can enjoy the ambience of the lakes waters most of the time.

Seriously, who sits around and thinks this stuff up?

A short film..."It features images of the Stone Forest, Western Hills and, not surprisingly, Across the Bridge rice noodles..."

I have to say that I just wish they'd let Green Lake be the park it is.

I'm not impressed at all with these "new" plans and ideas(?).

Tacky. In Beijing they 拆 history and culture. I guess some tacky is needed somewhere.

They have one of those here in Tengchong. They're noisy but people seem to enjoy it. The water wall projection is so-so but the laser/fountain thingy set to music looks very nice. I agree with Dazzer by the way that it it's a bit of an eye sore when the nozzles and the pipes protrude the water. Don't expect the movies to look spectacular though. When the novelty's worn off you find yourself struggling to figure out what's on 'screen'. The photo on top is definitely taken during one of the brighter moments.