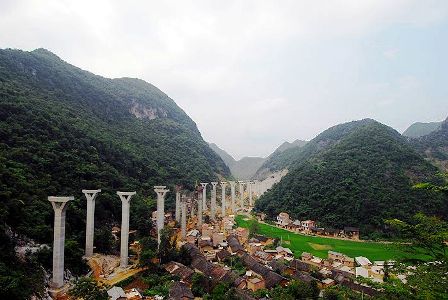 Construction is a frenetic, noisy fact of life in Kunming. Old buildings are being demolished at a breath-taking rate, with modern highrises going up to replace them in a matter of months. Outside of the city construction is just as hectic, although often out of sight until projects are completed.

Yunnan is in the process of upgrading its rail network, roads, waterways and other infrastructure and money does not appear to be of much concern. The ten largest construction projects in the province have a combined price tag of 225 billion yuan (US$35.5 billion), Kunming Information Hub is reporting.

Four of the projects involve the construction of railroads. A new rail line is currently being built from Kunming to Nanning with funding from the central government's Go West initiative. The 441 kilometer line will pass through Shilin, Puzhehei and Fuming before reaching Guangxi's capital.

The Spring City will also be directly linked by high-speed train to Chongqing. The new track will bypass Guiyang and Chengdu and is estimated to take between two and three hours, shortening present travel time by 16 hours.

A new line to Hekou is also currently under construction. When finished it will be Yunnan's first high-speed railway, capable of handling trains cruising at 200 kilometers per hour. Completion of the line is expected to facilitate increasing trade and travel between China and Vietnam.

The first phase of an ambitious Kunming to Lhasa railway is also currently under construction. The 161 kilometer track will connect Lijiang to Shangri-La and is set to be completed by 2015. It will pass by, not through, Tiger Leaping Gorge. The four new railways have a combined cost of 110 billion yuan (US$17.3 billion).

Kunming's urban rail network is slated to be completed in 2018. When finished, it will have six lines stretching 188 kilometers with 31 subway and light rail stations. Lines one and two are scheduled to be operational by the end of 2012. Construction of those two subway lines are projected to cost 21 billion yuan (US$3.3 billion).

The project with the highest profile, and potentially the largest impact on the province, is also the first to reach completion. Kunming Changshui International Airport (昆明长水国际机场), officially opens June 28 and will be China's fourth largest.

Two ongoing projects that once again aim to clean up Dianchi Lake are also underway. One involves diverting 600 million cubic meters of water a year from the Niulan River (牛栏江), a tributary of the Jinsha River, into the lake in efforts to flush out pollution and algae.

The goal of the 20 year project, according to a report from the provincial government, is to transform Dianchi Lake into the future water supply for Kunming and Qujing. The second project is made up of 101 different endeavors to filter and otherwise 'balance' the lake's pH and oxygen levels by 2015.

Kunming is also in the process of updating its electricity grid. Forty-nine new power stations will be built around the city and connect to power lines with a capacity of 110 kilovolts. Additionally, 27 smaller converter stations will be built and linked up with electricity distribution lines carrying 35 kilovolts. In total the city will install 2,300 kilometers of new power lines at a cost of 10.7 billion yuan (US$1.7 billion).

Great update on all the planned transportation. I'll believe it when I see it, or in this case, I ride on it. Kunming subway is taking forever, so not going to hold my breath for that highspeed rail to somewhere.

All I can say is: Holy moly! Transforming the city into a modern city is a massive undertaking especially in such a short time!

Ha haa Alex, I read something the other day about England putting in a highspeed line to link Birmingham with the capital. Estimated finish date 2026!! That's 14 years! Not too sure you can call it slow, even if they are 30% over time, 3-4 years for two subway lines under a city ain't bad going and a few years for high speed lines... so soo fast. Maybe its just because we have to deal with it all the time... it seems slow to me too...

That's a very good point. I forgot in the USA we don't even have highspeed rail, and the one planned in California will take decades, not years. I shouldn't complain too much.

All of this is quite amazing, but even in China not everything goes to plan. Originally the proposed high speed railway from Kunming to Vientiane, Laos via Jinghong and Boten was supposed to be completed by 2015, but a number of issues will likely push back that project for another 10 or more years, though I do believe that it will eventually be built. Also, since the idea is to link south-western China with the south-east Asian coast, Thai and eventually Malaysian and Singaporean co-operation is vital to building this link in the first place; building a line only as far as Vientiane would likely turn out to be a white elephant project since the objective is to make most income from moving goods between SE Asia and SW China quickly via train rather than passengers and that requires linking SW China to a coastline - something which Laos doesn't have.

Regarding the Hekou line, they've been proposing that one for years now since trains stopped running between Kunming and Hekou in 2002. Finally this article mentions a new high-speed line is under construction, but this will be of little use unless the Vietnamese also build a complementary high-speed line on their side (sure, they already have an existing railway line running from Lao Cai via Hanoi down to Saigon, but it's rather slow). Also, the Vietnamese government recently turned down a proposal for converting their existing line into a high-speed line, citing the high cost and the low passenger volumes that would utilize the line.

I love kunming, there's no messing around. It's China's industrial revolution, and they know it.

I hope they don't use sub-standard materials in constructing all these new project.

Blobbles, the reason for the delay in England is that a survey was made and it turned out that no Londoner would ever voluntarily travel to Birmingham.

Fifty years of nothing, five years of QiuHe - what a difference a man with a vision and drive can make.

While cycling to Puzhehei last weekend, I saw construction of the Kunming-Nanning line (which is really part of the Kunming-Guangzhou high speed line) under construction: a tunnel under the mountains east of Mile (弥勒), and a huge bridge over the Nanpan River (南盘).

Also, isn't there a rail line under construction from Dali to Myanmar via Baoshan (保山), Mangshi (芒市), and Ruili (瑞丽)? Originally the British were supposed to build it back in the 40s, but it was abandoned because of the war and revolution, but I thought it was back on the drawing board again.

Other new rail lines that I saw on a map of planned rail lines at the China Railways pavilion at the Shanghai Expo in 2010 include: Xiangyun (祥云) to Pu'er (普洱) via Lincang (临沧), and Lijiang (丽江) to Panzhihua (攀枝花)

Yeah the Lijiang line is currently under construction, while the Ruili line is supposed to form part of a proposed Kunming-Myanmar rail link - it will probably also be constructed at some stage (as reported by GoKM last year) but I suspect it will take a little while.

Hopefully the Kunming-Nanning train will not be "fuming" before its arrival. The name of the county it will pass through as it leaves Yunnan is "Funing." (富宁; "Fuling" would also be acceptable as that's what many call it in local Chinese dialect, but not "Fuming," I think.)

As Geogramatt writes above, this line is well under way, with completion planned for 2014 I believe. Further down the line toward the GX border their drilling out some amazing tunnels.

Fortunately the stretches I've seen place the train tracks high above the local farmers' fields, on concrete pillars, so hopefully it won't disrupt the transportation of those who happen to live in the "fly over space" between the great metropolises who grow the food we eat.

Transportation may close the economic gap between urban and rural areas,but it would indeed disrupt many tranquil, attractive places with natural beauty. In China, neither developers nor officials really realise this.
Hope they would value the resource of travel under such circumstance!