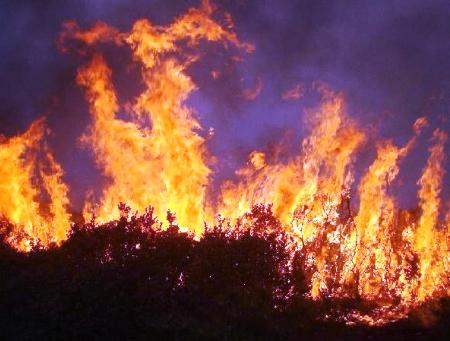 A forest fire that filled Kunming's skies with haze for two days has strained Yunnan's firefighting resources while underscoring the drought-stricken province's vulnerability to wildfires.

More than 2,000 firefighters and soldiers have been dispatched to fight a forest fire that started Sunday night in Yimen County (易门县), about 40 kilometers west of Kunming.

Overnight efforts to contain the fire were unsuccessful in the face of strong winds and dry conditions. On Monday the fire spread northeast toward Anning (安宁市) on Kunming's western periphery.

Several local media reports are describing the fire as "under control", but as of 4:20pm today the blaze, which has reportedly already destroyed a relatively small 67 hectares of forest, has not been extinguished. No casualties have been reported in Yimen or Anning. 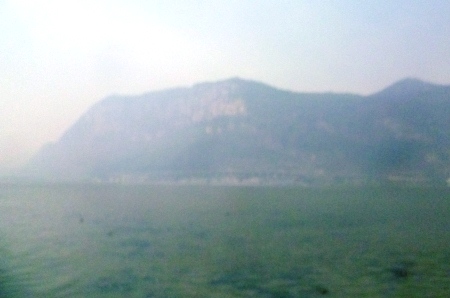 Kunming Party Secretary Zhang Tianxin (张田欣) visited the front lines of the firefighting on Monday morning. In his first three months as the city's top official, Zhang has repeatedly emphasized the direct and indirect threats posed to the city by three successive years of drought.

In addition to firefighters and soldiers, bulldozers and other construction equipment have been mobilized to dig trenches and clear flammable underbrush. On Monday a firefighting helicopter flew from Dali to the fire, where it dumped water from above in an effort to assist the people on the ground.

The fire is the second blaze near Kunming to require emergency response in the last five weeks. In early February a two-day mountain fire in Yuxi destroyed more than 40 hectares before it was extinguished by thousands of firefighters.

A maintenance worker has been arrested in connection with starting the fire. He was charged with littering.

I'm sure all the paper burning at at hillside graveyards over Qingming Festival will help too...

Thursday we were wondering why the haze was so bad despite reports that the fire had been extinguished... until we saw this:

The fire was rekindled in Wangjiatan forest in Anning, a county-level city on the outskirts of the provincial capital of Kunming. The fire is currently under control, and nearby villages haven't been impacted, Cao Long, chief of the Yunnan forest armed police said."

In America we have the fire prevention mascot named Smokey Bear. His motto is "only YOU can help prevent forest fires". Maybe China needs their version? We could call him Smokey Panda Bear. Or I guess a direct English translation would be Smokey Bear Cat. lol

Ya they are not allowing anyone to go hiking in any mountains in kunming, even for visiting tombs, until July because they are so worried about a fire starting.