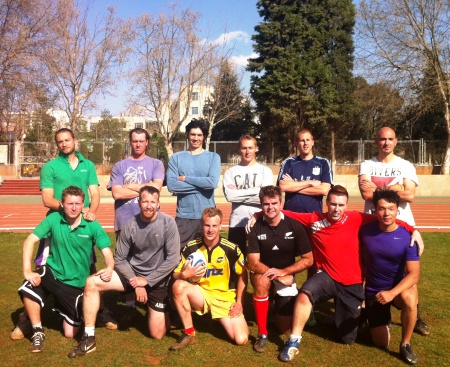 Update: We have just been notified by the Kunming Tigers that the match has been moved from Kunming Stadium to Tuodong Stadium. The match will still start at 2:15pm. Spectators should go to the stadium's second floor and enter through gate 14.

Telling someone in Kunming that you play "olive ball" (ganlanqiu, 橄榄球), as rugby is known in Chinese, tends to elicit confused reactions. Occasionally someone might display a flicker of recognition and then go on to say that they love the helmets, mistaking "American olive ball" for "English olive ball." 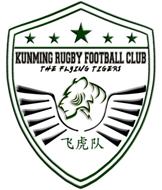 The sport now has a foothold in the city thanks to a group of enthusiastic players who have started Kunming Tigers Rugby Football Club. Other Chinese cities have long boasted their own clubs and regularly host other teams from around the country.

Rugby actually has a long history in some parts of China, not least in Hong Kong and Shanghai. Rugby was brought to China by British traders in the second half of the nineteenth century.

Following Liberation in 1949, rugby vanished from mainland China. The National Sports Council even banned rugby for a time, saying "the meeting of sullied bodies in physical contact cannot be approved." 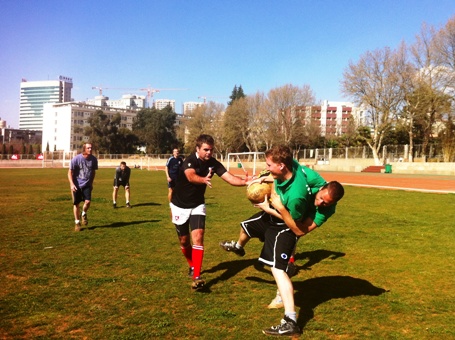 Getting ready for the Pandas

Rugby was non-existent on the mainland until the 1990s when a number of local clubs were established at universities and in the People's Liberation Army. The Chinese rugby team is now a regular participant in the IRB Sevens World Series. The 2016 Olympics will include the sport for the first time.

Believing that a baptism by fire is the best way to put their new team on the China rugby map, the Kunming Tigers have taken the bold step of inviting the Chengdu Pandas to Kunming for a match this Saturday. Admission to the match is free.

This will be Kunming's first rugby match, and with players from eight different nations so far, the Tigers showcase the sport's ability to bring people together and also to contribute to the community. 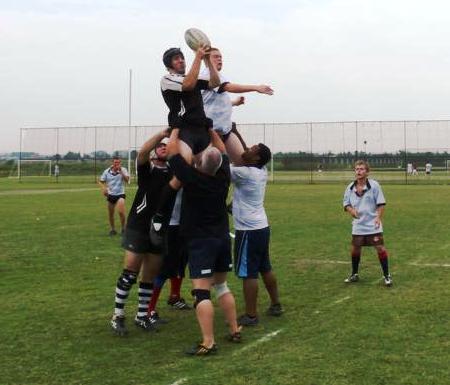 The Chengdu Pandas in action

So for those with an interest in watching or playing rugby, come down to Tuodong Stadium this Saturday at 2:15pm. The Tigers would appreciate any and all support in helping mark this historic occasion.

For those people who are more interested in rugby's social side, anyone is welcome to join the teams at O'Reilly's Irish Pub after the game. Regardless of the final result, both teams will be celebrating.

C'mon the Flying Tigers!
Get down to the game and make sure you come out for the afterparty at O'Reillys as well. It will be a massive night

Can't wait for the game.

I second that, defo come down to O'Reilly's for the Saturday night

Best team sport in the world. And the after-match "piss-up" at O'Reilly's will likely be as interesting as the game.

Can't wait to play this first rugby game of Kunming!
It's gonna be something to remember, glad to be a part of it!

Didn't think I would see rugby in Kunming.
Really looking forward to it, It may head to this after party

Bring it on! First outing for the Tigers and first Kunming tour for the Pandas...this promises to be a great day out. O'Reilly's afterwards is guaranteed to be a heap of fun with a pint of China's finest Guinness on top.

First picture the last one person on the right, my best friend Luca "Kun" Cunetta. Do you realize if he play football or rugby? Please dont think the italians play football like him. We usually are better, in particular me, i'm his idol...... Bye ma friend, i miss you!

This game will definitely be a good one and how can you beat free admission? I hear the African Drums will be playing at the game too!

When did we get shortened to just "the Tigers"?

We need to earn our 'wings'!

This is going to be a night to remember. I hope to see a lot of people here, everyone is welcome- lao wai and countryman alike!

Remember, lads: The rugby game is only a part of the weekend's competition.

Read pride is won and lost at the bar!

The Pandas are coming.....this is just the beginning

Kunmingers, better start bracing yourself! ON and OFF the pitch that is. Prepare for savageness...

Prepare your selfs for total domination ON and OFF the pitch! Boat races, dance offs and general drinking- thats where legends are born!

Pandas against Tigers. it's gonna be the war in the zoo !!!

I know kung fu...and the panda's are going down

We will Kung fu panda you guys off the pitch.

Where can you always find a tiger's head?
four foot from his tail!

So you better be careful

Cmon the Tigers! Give em Hell

Rule # 1: Dont mess with Pandas.
Tigers dreaming of victory either on or off the pitch....
Forget About It!!

Kunmingers! This weekend is your chance to help 'Save the Pandas'. Bring down your spare change and plenty of bamboo leaves - we want to do whatever we can to mitigate their suffering.

JCVD Quote : "biscuit has no spirit, it's just a biscuit" JCVD
GOOOOOOO PANDASSSSSSSSSS !

come one, come all to the Kunming stadium for SW China's greatest sporting spectacle......

They'll be some great ass on show, as the pandas hand the mingers their first ever whipping both on the pitch and in the pub!

Go to bed with itchy bum,Wake up with smelly finger.

You better be prepared!!!

NEWSFLASH:
Ladies of Kunming beware! It is a well known fact that after mating, the male Chengdu Panda leaves the female to raise the cubs by herself. Maintain vigilance at all times and remember, stay classy Kunming.

When a Chengdu player falls into a body of water, he doesn't get wet - the water gets Panda....

nice to see you pandas so excited, maybe you will have a chance on the pitch because you have more experience, NO way you are going to win off the pitch, this is for sure.

This tour came at the perfect moment!

Middle of March marks the start of our mating season; but I think down in Kunming, where it's a little warmer, we surely celebrate this annual momentous occassion in the first weekend of March.

Sorry Tigers, clear the forest! Its been a long year, and We Pandas are HOT!!

I think you have forgotten about the little rugby game we are playing.

While you lot are cooking an appointment for a lives transplant. You will need to fend off the tigers from their unrelenting thirst for pandog blood.

When the flying kunmingers run wild on you!!!!!

We have just been notified by the Kunming Tigers that the match has been moved from Kunming Stadium to Tuodong Stadium at 99 Dongfeng Dong Lu. The match will still start at 2:15pm. Spectators should go to the stadium's second floor and enter through gate 14.

everybody spread the word.