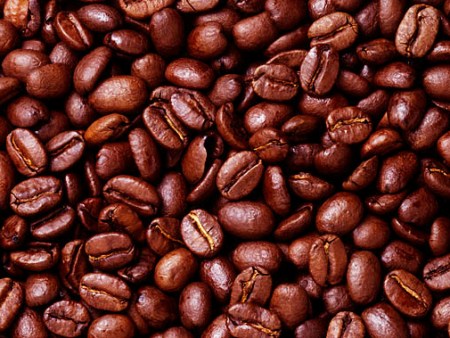 US-based coffee chain Starbucks signed an agreement in Kunming on February 6 to establish a joint venture company that will expand its coffee-sourcing network in Yunnan to serve its domestic and global supply needs.

The joint venture, which will be formed with local coffee grower and processor Ai Ni Group (爱伲集团), has obvious benefits for Starbucks' rapid expansion in China and should add momentum to the development of Yunnan's coffee industry. Financial terms of the deal have not been disclosed.

The new joint venture will be controlled by Starbucks and will focus on buying and exporting high-quality arabica coffee beans grown in Yunnan. It will also operate multiple dry mills around the province.

The Starbucks-Ai Ni alliance deepens the coffee retailer's substantial investment in Yunnan's coffee industry and further underscores the importance of China – and Yunnan – to its bottom line.

Starbucks entered the mainland Chinese market when it opened its first retail outlet in Beijing in 1999. The company has plans to increase its number of stores in China from more than 800 today to 1,500 by 2015.

Coffee is increasingly popular in China, but it is still only just beginning to be drunk by Chinese. According to Chinese coffee industry statistics, the average mainlander drinks three cups of coffee per year compared with a worldwide per capita average of 240 cups per year.

Such statistics, when combined with China's population of 1.6 billion, suggest that coffee consumption in China is only just beginning what could be a long period of sustained growth. This has major implications for Yunnan, which accounts for more than 95 percent of China's coffee production.

Not surprisingly, the Yunnan government has been actively promoting investment in coffee farms – primarily in the main growing areas of Pu'er, Baoshan and Dehong.

At present Yunnan's coffee bean output is 40,000 metric tons per year, but officials are pushing for production totals to exceed 200,000 metric tons by 2015 – a fivefold increase over current capacity.

Should Yunnan's coffee industry keep pace with government goals, the province will still be but a minor player in global coffee production for the time being. To put things in perspective, one need only look across the province's southeast border at Vietnam, which produced more than 1.1 million metric tons of coffee beans in 2010, roughly 28 times Yunnan's output. 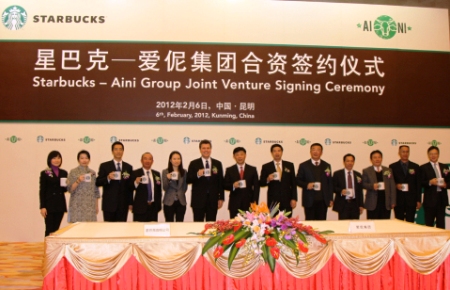 Starbucks and Ai Ni execs at the Kunming press conference

Consistent quality is a challenge for many of Yunnan's smaller growers, and is an issue that Culver said Starbucks will address as it expands its network across the province.

"We are committed to help local farmers elevate the quality of the coffee in the region while bringing the best of Yunnan coffee to the rest of China and the world," he said.

Starbucks has quickly expanded its involvement in Yunnan since first taking serious interest in the province's coffee in 2007, when it began inspecting farms and testing local beans.

In 2009 the company began offering its South of the Clouds blend featuring beans sourced in Yunnan, which is available today in outlets across China and elsewhere in Asia and the US. It opened its first retail outlets in the province in downtown Kunming in early 2011.

In 2010 Starbucks, the Pu'er government and the Yunnan Academy of Agricultural Science signed an agreement to establish the company's first-ever base farm, a coffee development center, coffee farmer support center and coffee processing facilities in Pu'er.

Pu'er coffee industry officials recently told The Economist that one hectare of coffee yields an annual income of nearly US$10,000 and three times the profit of one hectare of tea. Growing demand and high profitability have made many of the farmers burned by the collapse of the Pu'er tea market in 2008 switch from growing tea to coffee.

It looks like an outlet of Starbucks will open in the north, next to Metro. Any further info?

That would appear to be true. There's also a new one on Dianchi Lu at the massive Nanya Fengqingyuan development.

Coffee, a big new market in China.. And what about drinking tea, a such healthy millenary chinese way of life.. if it could disappear & replace.. so great for coffee business ! Wellcome f... S...ks !

@JLG: If coffee plantations do significantly reduce the amount of tea grown in Pu'er, it is likely to only lead to higher tea prices followed by increased tea planting and another tea bubble.

Recently heard there's a tie in with Starbucks, or a Starbucks official and the AVG "Flying Tigers" - a promotional possibility forthcoming... maybe they will do a video ad - at least that'll be more than we have seen from the esteemed producer, John Woo and company. What ever happened to "Flying Tiger Heros" destined (as advertised) to show the close relationships between the Tigers and the people of Yunnan???

The Starbucks Reserve Roastery will soon open at the newly renovated Zhengyi Fang branch (facing Renmin Zhong Rd.), which may feature rare, small-lot coffees from around the world.

For coffee connoisseurs who seek fully immersive coffee wonderlands, you may have heard of the world largest Starbucks that opened in Shanghai. That megastore is also one of the Starbucks Reserve Roastery & Tasting Room chains, which target more upscale & sophisticated customers.

Starbucks Reserve Roastery in their own words:

The upcoming Zhengyi Fang branch may be a Starbucks Reserve store in lieu of the full-scale roastery version.

Right, but most of us city slickers probably left our previous high-octane lives for a slow dripped brew in Kunming, especially if strolling past old street.

From the outside, the new store looks like a bar.