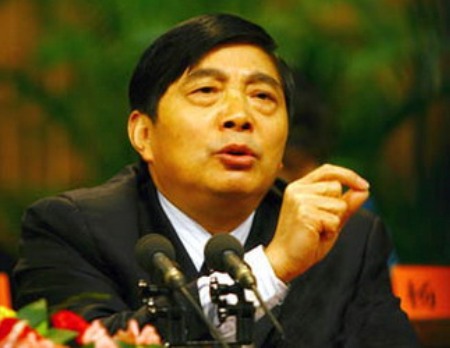 The man whose personality defined Kunming's 'Sunshine Government' for the past four years will no longer call the shots in Yunnan's capital.

On December 3 it was announced at a meeting of municipal cadres that Qiu He (仇和), who has served as Kunming's highest-profile party secretary in recent memory, would be assigned to a new post: provincial deputy party secretary.

The main surprise in the rather unexpected move is that Qiu did not retain his position as Kunming's top boss, which has been given to Zhang Tianxin (张田欣).

Qiu was virtually unknown in Kunming before taking up his post as party secretary in December 2007. By early 2008, Qiu had quickly became feared by local bureaucrats used to the old way of running Kunming.

In February 2008, when an investment official fell asleep in a meeting, Qiu forced him to resign. Soon afterward he organized a taskforce whose job would be to ensure that city employees were arriving at work on time and taking no more than thirty minutes for lunch. Qiu himself is reputed to typically skip lunch altogether.

An avid reader of American economist Paul Samuelson, Qiu professed to believe in the market's superiority to the government as a driver of development, yet he also seemed fond of rule by fiat.

Before arriving in Yunnan, Qiu was party secretary of Suqian city in northern Jiangsu, where he privatized local schools and hospitals. He also demolished many of the city's run-down areas and rebuilt them, a move that was highly unpopular at first but was eventually considered a success once property prices rose.

Qiu had also earned a reputation as an anti-corruption crusader and had even introduced quasi-democratic reforms that attracted the attention of senior officials in Beijing.

For the last four years Kunming has been a proving ground for Qiu-style development. During his tenure, the city made massive investment in transport infrastructure.

One of the more ambitious projects involved simultaneously smashing 18 flyovers on the second ring road before undertaking a year of construction, adding an elevated road and increasing connectivity to smaller cities around Kunming. It was largely successful.

Kunming's road network is still being improved, and construction is underway on a new metro system and a new international airport, both of which are expected to debut in 2012 and greatly change the city. Qiu has also overseen an urban greening campaign, privatization of hospitals and education reforms.

What Qiu may end up being known best for is demolishing massive swathes of Kunming's "urban villages" (城中村 – older, poorly built neighborhoods surrounded by modern city) to make room for large-scale real estate projects. That many of these projects have been awarded to companies from his native province Jiangsu has not been lost on the locals.

Qiu's efforts to convert Kunming from backwater town to regional economic hub were watched closely in Beijing, where many believed a position in the central government was waiting for him.

Should he have been primed for central leadership at all is uncertain, but if that was actually the case, the question of what derailed his ascent begs to be asked. As with most enquiry regarding the machinations of China's government, there is little more than speculation with which to work.

What did seem certain is that for a while Qiu was a rising star in the Chinese government. Less than a year into his tenure in Kunming, Qiu was honored in Beijing as one of China's top contributors during the first 30 years of the reform and open policy initiated by former paramount leader Deng Xiaoping.

Fast-forward to today and Qiu no longer has the considerable power he had as the top leader of one of China's up-and-coming provincial capitals. Instead he is in a deputy role in the government of one of the country's poorest provinces. The fact that Qiu's successor Zhang was previously the director of the province's propaganda bureau may suggest that Qiu's superiors wanted someone more media-savvy to run the city.

QiuHe had an incredibly difficult job that became even more complicated during his most difficult tenure - the global financial crisis. Forced to accelerate public works to keep people employed, the city's debt skyrocketed into oblivion. It'll be decades (maybe centuries) before Kunming can pay off the incredible debt racked up during Qiu's tenure - but he laid a most excellent infrastructural foundation for the city to rise up to the level of a ChongQing or ChengDu - or perhaps eventually to Tier 1 city level - But somebody, PLEASE PLEASE PLEASE PERMANENTLY fix the damned taxi problems - once again changing shifts during the morning, lunchtime, and evening rush hours! PUNISH the fiends with enforceable heavy fines, license suspensions, etc!

I look forwards to seeing QiuHe's activities as Deputy Party Secretary for the entire province. As for shoveling labor contracts to Jiangsu - Kunming was and continues to be a known breeding ground of intense corruption - although nothing quite approaching the gangland levels of Sichuan or Liaoning. Jiangsu companies were probably the lesser of the two evils.

I'm not familiar with the larger Yunnan construction firms - but I know from personal observation that a significant number of the smaller subcontractors behave like petty extortionists - frequently stalling contracts and invading client offices and places of business to renegotiate their contracts, while skimping on materials and generally performing shoddy work bordering on incompetence, laziness, negligence, or just outright fraud.

I miss the urban villages, with their unique businesses and human scale.