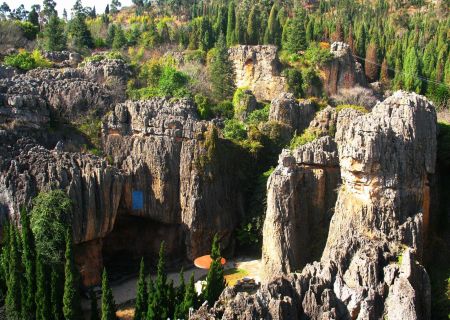 Stone Forest has long been Kunming's top tourist draw, but its distance from the city and its exorbitant entry fee make it less than convenient for many visitors to the Spring City in search of rocky Karst scenery.

There is another option: Shicheng (石城). Often referred to as Kunming's "mini Stone Forest", Shicheng is about 35 kilometers away from downtown, compared to 120 kilometers to get to Stone Forest. Tickets to enter Shicheng are only three yuan per person, rather than 175 yuan.

Shicheng has inspired visitors from afar for centuries. Xu Xiake (徐霞客), ancient China's most famous travel writer and an accomplished geographer, visited Shicheng in 1638 and marveled at its beauty.

Located on the north side of Haikou (海口) on Dianchi Lake's southwest side, Shicheng may not boast the grand scale of Stone Forest, but it is much more accessible and infinitely less touristy, with most visitors coming from nearby towns and villages.

When we arrived at Shicheng, the main gate was closed so we had to detour to a side gate where a guard sold us tickets. We walked over a small bridge where a group of children were playing soldier using plastic guns that made alarmingly realistic noises. However, once we crossed the bridge all we could hear was the chirping of birds. The only people we could see were a few university students picnicking in the distance. We were finally out of the city. 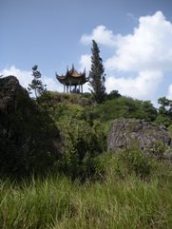 Past the bridge, we encountered several paths. Although there were no maps and nothing in the way of visitor information, we were not worried about getting lost. The paths were all made of brick or stone and well-marked. We elected to take the main path which brought us to an overlook where we took in the kind of craggy rock formations for which Stone Forest is renowned.

Further up the path we found a small pagoda which had an excellent view of Haikou and the mountains beyond. Unlike the viewing pagodas at Stone Forest, this one was empty and we could take our time enjoying the scenery. On our way down we explored a few of the smaller paths, which twisted past large rock formations and wound their way into the woods. 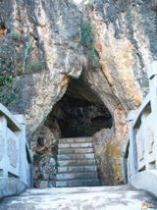 Some paths lead straight into the Karst

Shicheng is not as manicured as the Stone Forest and has next to nothing in terms of facilities. The main path is short and although the park feels more compact than the Stone Forest, it has a far more natural feel. There are no tour guides, or restaurants – but if you do get hungry there are a few decent local restaurants in Haikou. The grass is overgrown and natural rather than freshly mowed and there are no convenient benches. This is all part of its charm. 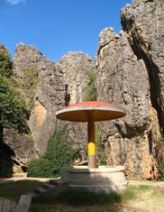 Nice spot for a picnic

For some people, Shicheng on its own may not be enough to justify the short trip out of town, and no traveler should use it as a replacement for Stone Forest. However, if you happen to be passing by Haikou, or you're in the mood for seeing one of Kunming's lesser-known sights, Shicheng may be an ideal place to spend a couple of hours strolling around or enjoying a picnic.

Getting There
Shicheng is located approximately three kilometers northwest of Haikou, roughly one kilometer north of provincial road S215. If taking a car or bicycle, follow the Gaohai Highway (高海公路) southward down Dianchi Lake's west side, get off at Haikou, then take a right on Haikou Xia (海口峡).

3RMB (instead of 175RMB) for a closer, more natural, less touristy site? I'm sold! Thanks GK!

There is a bus #33 from Kunming to Haikou, but it is not very frequent. Better to take one of the minibusses that run from the corner of Chunhui Lu 春晖路 and Renmin Xilu (this is just a little east of the big flyover). The fare to Haikou is Y8. From Haikou a tuk-tuk to Shicheng is 10Y, as the article says it is about 3km along a not-too-interesting road.

The bus to Haikou also passes the Xihua Wetlands mentioned in a previous post and Guanyinshan 观音山, a Bai village with a large Guanyin temple on a rocky outcrop overlooking Dianchi.

Thank you for this interesting post! Do you think there are other beautiful places to see around? Is it interesting to stay 1 night at Haikou or somewhere else to see more? I am looking for cheap, natural, not touristic and simple places for travel by my weekends..!

Updating travel information for this location. You can take a bus direct to Haikou from the Xiao Ximen bus depot for 12 yuan. It takes 1 hour. From Haikou a tuktuk takes you 15 minutes for 10 yuan to the park entrance.